Internationalisation and the research community were praised at what may have been the last ever doctor promotion event at Håkon’s Hall.

AUTUMN DOCTORS: The PhD graduates from autumn 2014 were celebrated at the Doctor Promotion on 30 January 2015. The photo shows a group of graduates from the Faculty of Medicine and Dentistry.
Photo:
Thor Brødreskift

On Friday 30 January, the new doctors at the University of Bergen (UiB) were celebrated in Håkon’s Hall (Håkonshallen). The tradition of doctorates at UiB goes all the way back to 1949 and the first PhD graduate, Egil Alvsaker.

In 1964, Thora Hartveit became the first woman PhD graduate from UiB. Today there is equality among the genders, with 111 men and 107 women graduating at UiB in 2014.

In his speech, Rector Dag Rune Olsen in particular emphasised the international PhDs graduating from UiB. In the last few years, around one third of all doctoral graduates have been international students and in 2014 the graduates were from 38 countries.

“Knowledge knows no borders. Only through research and collaboration can we hope to solve the world’s major challenges. Climate change and armed conflict, both between and within countries, are examples of why knowledge and science, in combination with good leadership, are crucial for solving our shared global challenges,” said Rector Olsen. “But this requires that we are always searching for answers to old as well as new questions.”

He added that although these large challenges can sometimes seem unassailable, the research performed in all corners of the world bring hope for a better future.

View photographs from the January 2015 doctor promotion on Flickr.

Always reach for the big ideas

Liv Eggset Falkenberg spoke on behalf of the new PhDs. She wrote her doctoral thesis on the brain’s chemistry and function in healthy and schizophrenic people.

She spoke about how her supervisor, Professor Kenneth Hugdahl, draws a distinction between ‘research’ and ‘science’.

“Everyone can investigate, or research, but to contribute to the progress of science requires so much more effort,” she said. “There is a fine line between genius and stupidity, and one should always try to reach for the big ideas.”

She also stressed how important it is to have a community of researchers to discuss with.

Håkon’s Hall served as the royal residence during Håkon Håkonsson’s reign in the thirteenth century. UiB has held its doctor promotion at Håkon’s Hall since August 1998.

The January 2015 event was probably the last to be arranged at this historical venue. Starting in autumn 2015, the new university assembly hall will be the venue of choice for events of the scale and importance of the doctor promotion. 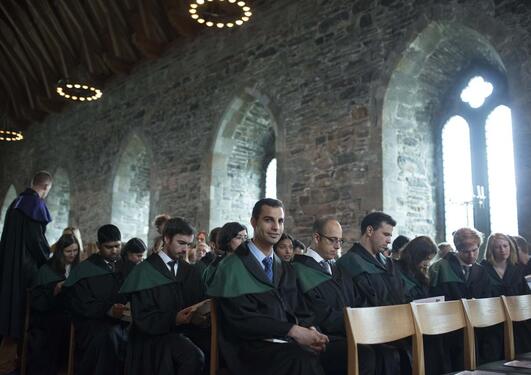 In 2014, 218 new doctorates were conferred at the University of Bergen. 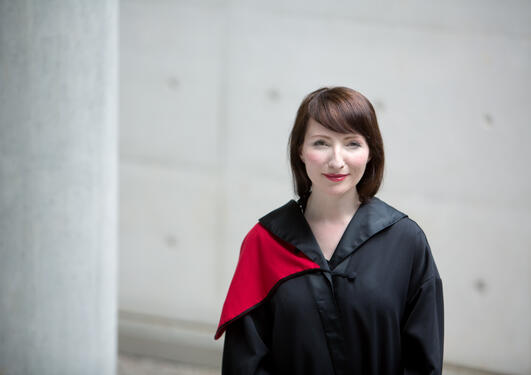 On a quest to cure cancer

The premature death from cancer of a close friend and colleague, made Agnete Engelsen even more determined to find a way to cure this devastating disease. 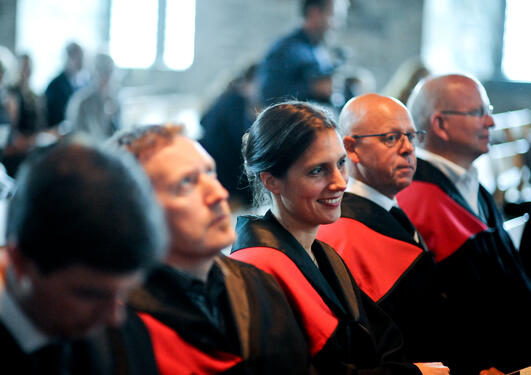 In 2013 there were more women PhD graduates at the University of Bergen than ever before. A total of 265 new PhDs graduated, of which 140 were women.