THE ORIGINS OF SPECIES: Being awarded the ERC Consolidator Grant means that Andreas H. Hejnol and his team at the Sars International Centre for Marine Molecular Biology can continue their efforts to unravel the secrets of the origins of species.
Photo:
University of Bergen

Andreas H. Hejnol is the second University of Bergen (UiB) researcher to receive the ERC Consolidator Grant, after climate researcher Noel Keenlyside became the first UiB researcher to receive this grant in January.
“I am very happy and also relieved that the hard work of previous years and the intense work on the proposal has paid off. Furthermore, I am happy that my research received the ERC stamp of approval for high quality and that the questions I try to answer will receive further interest in the public,” says Andreas H. Hejnol, who has conducted research on evolution at the Sars International Centre for Marine Molecular Biology for more than 5 years.

Reconstructing the origin of species

Hejnol heads the research group Comparative Developmental Biology of Animals at the Sars Centre. In the past, the centre was a department at Uni Research in Bergen, but joined the University of Bergen (UiB) on 1 January 2015.

“The goal of the project is to understand animal evolution much better,” he says before adding the central question of the project: What is the nature of the molecular and genomic changes that gave rise to the animal diversity we have on this planet?

“The proposal aims to reconstruct the evolutionary history of specific embryonic cells of animals, the so-called mesoderm. These embryonic stem cells are present in most animal embryos, including humans, and are located between the so-called ‘endodermal cells’ that form the digestive tract and the ‘ectodermal cells’ that form the skin and nervous system,” explains Hejnol. “The mesoderm, in between, is giving rise to all other organ systems such as musculature, blood vascular system and excretory systems like, for example, the human kidney.”

The ERC Consolidator Grant enables Hejnol to take a closer look at how these organ systems originated. He and his team will do this using embryos of ribbon worms, rotifers and other animals.

These tiny life forms are all made of basic cells, making it possible for the researchers to discover ancient genes that may provide answers to the evolution of species in the world’s seas.

“I will reconstruct the ancient evolutionary origin of these cells and identify the changes in the molecular and cellular mechanisms that gave rise to the diversity of these organs in animals,” says Hejnol.

Making use of the latest in technology

According to Hejnol, the project’s ambitions are of such a scale that it would be hard to conduct without the funding provided by the ERC. Particularly as several technologies have advanced rapidly in recent years.

“We aim to use the newest technology in microscopy, computational biology, and comparative genomics to study animals that have never been investigated regarding these questions before,” says Hejnol.

“Only recent advances of these methods have made such projects possible. The comparison of the novel data will ultimately elucidate the evolutionary changes that gave rise to the huge diversity of mesodermal organs in animals, including humans,” he says. “A lot of pioneering work will need to be done and skilled staff is needed to conduct a project such as this. The grant will be mainly used to attract world-class researchers.”

Hejnol believes this pioneering approach will also benefit the UiB and Bergen research community as a whole.
“The project does not lie in one of the common focus areas of the Research Council of Norway, since it is addressing basic questions in zoological research and evolution. My project is addressing fundamental questions regarding animal body plan evolution using marine animals and thus broadens the diversity of research conducted at UiB,” he says.

Hejnol believes that with the Sars Centre now a part of UiB there is a unique chance to strengthen biological research and education, as the university is already hosting other research groups that are addressing similar questions.

“It also gives the opportunity to establish cutting edge methodology – such as single plane illumination microscopy – into the range of methods used by researchers at UiB,” says the microbiologist.

During the course of his five year ERC grant period, Hejnol plans to exchange research discoveries with Chris Lowe at Stanford University’s Hopkins Marine Station and with Uli Technau at the University of Vienna, who both conduct research on other species than the UiB researcher.

In addition to the tiny sea animals that Hejnol and Staff Engineer Aina Børve discover at home in Bergen, the UiB/Sars Centre researcher plans to visit marine research centres worldwide to find other animals needed to conduct his experiments. These centres include the University of Washington’s Friday Harbor Laboratories and the University of Gothenburg’s Sven Lovén Centre for Marine Sciences.

The article in print: Reconstructing the origin of species.pdf 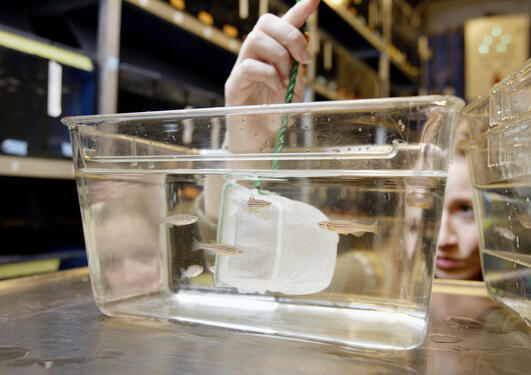 The Sars Centre is now part of UiB

On 1 January 2015, the Sars International Centre for Marine Molecular Biology became part of the University of Bergen (UiB). The centre was previously part of Uni Research. 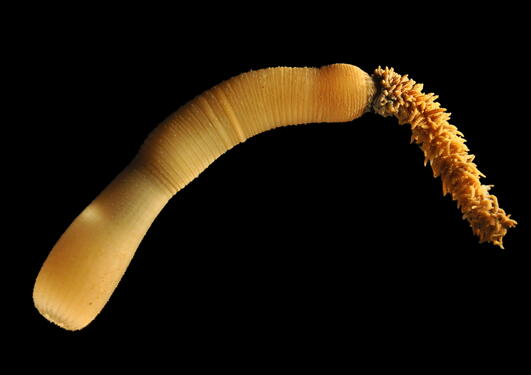 Penis worms uncover the evolution of the digestive system

A team of scientists has revealed that the enigmatic marine penis worms (priapulids) develop their intestine just like humans, fish or starfish do.