Surveying the Arctic for new species

The Centre for Geobiology explore active geothermal springs on the Arctic Mid-Ocean Ridge. The objective is to find new animal species and examine how mining operations on the seabed will impact on the environment.

MICRO-ORGANISMS IN THE DEEP, DEEP SEA: The University of Bergen's Centre for Geobiology is a Norwegian Centre of Excellence. Researchers from the centre are searching Arctic waters and have discovered a number of new species, giving mankind new knowledge about biology and geology in the deep sea. PhD Candidate Jon Thomassen Hestetun (left) and researcher Bernt Rydland Olsen are examining species after a trawl.
Photo:
Kim Andreassen

In July and August 2014, researchers from the Centre for Geobiology (CGB) at the University of Bergen (UiB) went on an expedition called Hydrothermal vent field on the Arctic Mid-Ocean Ridge.

With the assistance of the research vessel G.O. Sars and high-tech measuring equipment, the researchers surveyed and collected samples from recently discovered volcanic deep sea areas around the island of Jan Mayen, which stretch from 150 to 2,500 metres under the sea. These areas may contain unknown animal life and large mineral deposits.

Using unmanned underwater vessels, the researchers have so far made detailed surveys of volcanic areas and geothermal springs. They did this with the assistance of a new sonar technique, which provides images with more than one hundred times the resolution attained previously.

“This provides important new knowl- edge about volcanic and hydrothermal activity. It has also given us new information about the prevalence of metal deposits in the seabed,” said Professor Rolf Birger Pedersen from CGB, who headed the expedition.

Swarming with life on the seabed

Outside Jan Mayen one finds Mohns Ridge and Kolbeinsey Ridge, which are an Arctic extension of the Mid-Atlantic Ridge. Here, the continental plates slide away from each other and create volcanic activity. When the seawater presses down into the crevices around the vol- canic area, it is warmed up and pumped up to the surface through channels.

Around the geothermal springs, where boiling water and chemical deposits settle on the seabed, black smokers are created.

On the most recent expedition, the researchers have collected geological and biological samples from the seamounts along Mohns Ridge which is located 80 kilometres north-east of Jan Mayen, Kolbeinsey Ridge and the so-called Loki's Castle. The largest seamounts are 3,000 metres high.

Among these underwater versions of the mythical Nordic landscapes Dovre and Jotunheimen there is totally unique animal life as well as microorganisms that can survive in extreme temperatures. These microorganisms constitute the very roots of biological life on earth and may tell us something about how life on earth originated.

“We have discovered over 50 new species in these areas since the centre commenced operations in 2007,” Pedersen said.

The geologists and biologists on board the research vessel have taken many samples of these organisms.

“We are talking about newly-formed geological landscapes and unique ecosystems. Data and samples that are collected during our expeditions provide new knowledge about biology and geol-ogy in the deep sea,” explained Pedersen.

The researchers have also placed measuring instruments on the seabed north of Jan Mayen to monitor CO2 emissions from the volcanoes. The objective is to study the extent of the emissions and how they impact on the environment in the area.

On their expeditions, the researchers also use Bathysaurus, a remotely operated vehicle (ROV) to explore in more detail two areas near Mohns Ridge which they discovered in 2013. Among other things, the researchers are interested in identifying metal deposits.

Large amounts of minerals and me als such as iron, copper and zinc are deposited around the geothermal springs. There may also be gold and silver.

“The geological experiments are part of the EU-financed project Midas. The goal is to gain an understanding of the possible environmental impact of mining operations in the deep seas. Norway has enormous deep water areas with large amounts of resources. Even though we are, first and foremost, conducting basic research, this research may result in commercial operations in the long-term,” Pedersen said.

The researchers at CGB will also attempt to cultivate microorganisms on and below the seabed in their natural environment.

“The experiment relates to bioprospecting and the hunt for special enzymes that can be used on an indus- trial scale in the pharmaceutical and chemical industries,” says Rolf Birger Pedersen. 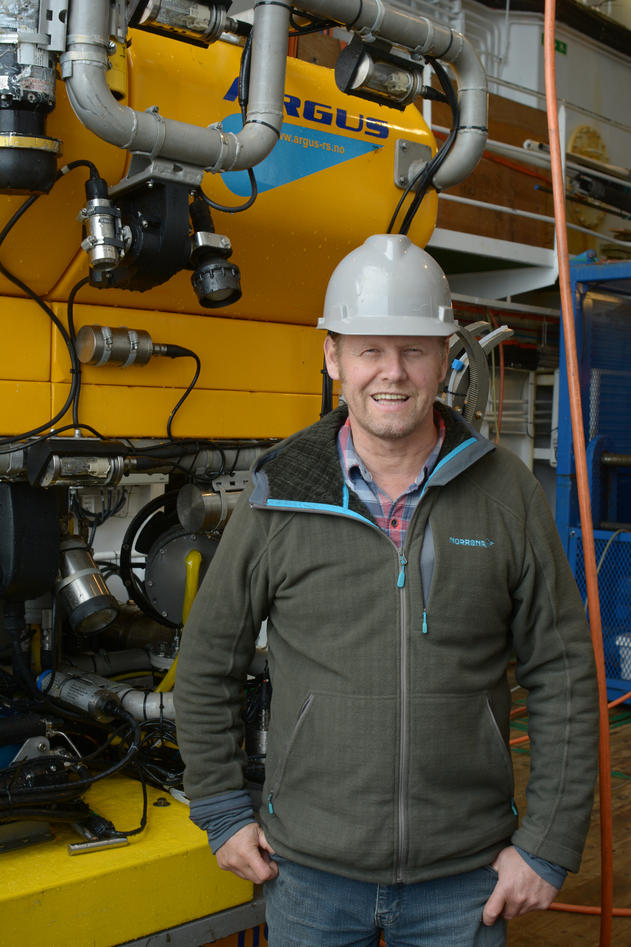 The article in print: Surveying the Arctic for new species.pdf