Biodiversity hot spots in the ocean are an untapped resource for safer, cheaper and greener products. The research project InMare has received EU funding to explore this resource.

Animals found around underworld volcanoes have evolved to live in extreme conditions. These properties may be put to industrial use, researchers say.
Photo:
Centre for Geobiology

One frequently hears that global resources are depleted. One such resource that still remains untapped is also the largest: the range of microbiological resources in the seas. These could be providing the world with new resources from which to produce safer, cheaper and greener products.

Microbes that survive in extreme conditions are of special interest. These can often tolerate extreme pressure, salinity or temperature, and could provide enzymes that are able to perform in industrial settings under harsh physical and chemical conditions.

The University of Bergen (UiB) is partner in InMare, a new international project funded by the EU's Horizon 2020 programme. The project will mine for and use newly discovered microbial enzymes and metabolites, in particular for the targeted production of fine chemicals, environmental clean-up technologies and anti-cancer drugs.

Horizon 2020 is the biggest EU Research and Innovation programme ever with nearly 80 billion Euros of funding available over 7 years.

UiB’s Centre for Geobiology is Norway’s leading deep-ocean research environment. For the past twelve years, researchers and students from the centre have explored the volcanic underwater world of the Arctic Mid-Ocean Ridge (AMOR). Through their summer expeditions to the area, they have discovered new Norwegian nature every year.

Loki’s Castle and other areas like it will likely represent vast resources for bioprospecting.

“In the InMare project we will have the possibility to apply our knowledge in state-of-the-art DNA sequencing technologies to analyse the biodiversity and metabolic functions in AMOR ecosystems in order to discover new industrial enzymes deriving from these extreme habitats,” says Researcher Ida Helene Steen from the Centre for Geobiology.

The majority of microbes from extreme environments cannot be cultured under standard lab conditions.

“After 4 billion years of evolution, nature has established a vast diversity of enzymes, some of which may fit perfectly well to the industrial demand. Our task will be to identify them using corresponding screening conditions, at the very early stages,” says Professor Peter Golyshin of Bangor University, the leader of the InMare project. 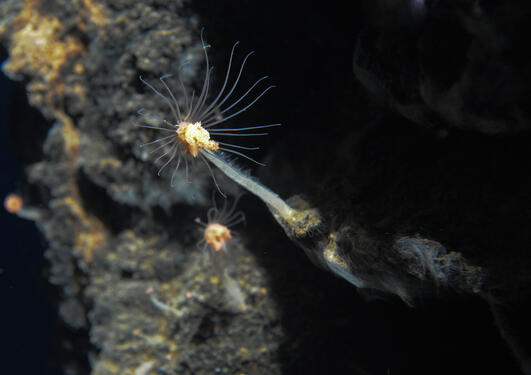 A waterworld of volcanoes

At Loki’s Castle in the Arctic Ocean, researchers from the University of Bergen (UiB) have discovered a so far unknown world of volcanic activity underwater. They hope that this can become Norway’s new national park.