Heathlands get status as select habitat

DELIGHTED: “This is fantastic news, and calls for champagne,” exclaims Professor Emeritus Peter Emil Kaland at the University of Bergen’s Department of Biology and one of the driving forces behind the Heathlands Centre at Lygra north of Bergen.
Photo:
Eivind Senneset

The coastal heathlands of Norway are the northernmost of this type of landscape in Europe, with more than 1,000 kilometres stretching all the way from Norway’s border with Sweden in the southeast to the islands of Lofoten in the north.

“The heathlands have been an essential part of food production in Norway, but has sometimes been frowned upon,” says Kaland. “In the past it was believed that the lack of forests suggested an impoverished landscape, when rather the opposite is the truth.”

Ever since the Neolithic period, or New Stone Age, the people on Norway’s coast used the heathlands for food production. The relatively mild winter climate along the coast enabled domestic animals to graze all year, feeding on grass in the summer and heath in the winter.

Underpinning the decision to award the status as select habitat to the Heathland Centre is research from UiB’s Department of Biology and the centre itself. Previously, researchers travelled along the coast and identified 23 heathland areas that have been included in this national habitat. This was summarised in a report called Kystlyngheiene i Norge (The coastal heathlands of Norway).

Preserved, but not protected

The status as select habitat type does not imply landscape protection. Kaland thinks this is a good idea.

“Full protection would be too expensive and the state would find it hard to follow up an actively used landscape such as the heathlands, where you must use fire to renew the heather,” Kaland says, who was knighted in 2012 for his efforts to preserve Norway’s landscape heritage.

He is, however, delighted that Norway is taking care of this particular landscape. In Europe there are more than 3,200 kilometres of  heathlands along the coast from Portugal to the Arctic Circle. A third of these heathlands is located in Norway, and according to Kaland there was pressure on Norway to take care of its cultural heritage from the rest of Europe.

Today between 10 and 15 per cent of Norway’s original heathlands landscape is in use. However, there is growing interest in this landscape from a new generation of farmers, in particular amongst those who are concerned with ecological issues and questions of sustainability. 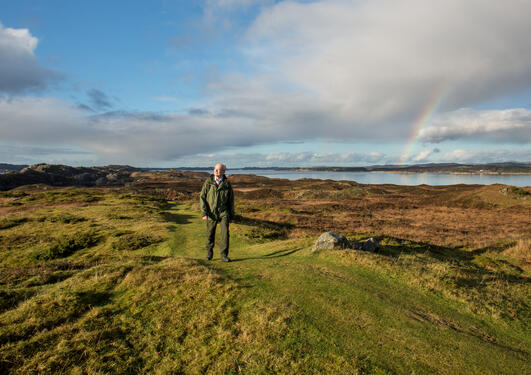 Remains of the once dominant heathlands of northern Europe are preserved at the Heathland Centre north of Bergen.