The collaboration between Professor Kjersti Fløttum and Associate Professor Øyvind Gjerstad started when Øyvind was Kjersti's student. Now the two work together on a project about the role of language in the climate change debate.

“The first time I met Øyvind was in 2004 when he took a master's course I was giving on linguistic polyphony – the theory that multiple voices can be present in one and the same utterance. He was working on a master's thesis on another topic, however we never completely let go. He developed a doctoral project with the main focus on the theory I had been teaching.

I was Vice Rector for International Relations from 2005 until 2009, an exciting function but also a hard-working period. It was important for me to remain up-to-date on my research interests and, in fact, Øyvind helped me in this. The reason was that he became interested in some aspects of the theory on polyphony that I did not consider to have been particularly well elaborated., and this I wanted to follow up.

What is important in a relationship such as ours is that we are able to develop good and open discussions. Øyvind has always been enthusiastic, bringing up new and interesting ideas which we refined during numerous discussions. His dissertation was incredibly exciting and marked a clear progress of the theory that I had been involved in generating.

During the work on a doctoral dissertation the supervisor often tends to take on a motherly role towards the doctoral candidate: Are you getting any sleep? Are you eating? Are you ok? Can I do anything? During the final days before Øyvind submitted his thesis, I was worried: In his office I saw some very dry bread slices, a can of chocolate spread and a half-finished jar of jam. Was this all he had to eat?

However, at the same time, he was the one who cared for my well-being, through frequent and very polite e-mails. I remember he typically wished me a good weekend, also in his most hectic periods, and pointed out that I must not wear myself out!

I was very proud of his doctoral thesis defence. Nothing can please a supervisor more than when your candidate has surpassed you by miles. It was a fantastic experience. I hope I can motivate him to go on and to become the builder and leader of new projects.

In addition to deriving great pleasure from the research, Øyvind is also very precise. On many occasions when I write things alone or together with others, I think: “Hmmm, Øyvind would probably have objections to this.” He would not say anything directly, but would have asked whether it could be expressed in another way.

My master’s degree was in French language studies. However, early on, I wanted to work more across disciplines. I took an interest in the study of political language and rhetoric and established good contacts with people at the Department of Comparative Politics. I also met friends and colleagues at the Bjerknes Centre for Climate Research, where many are interested in science communication. This combination developed into what became the research project Linguistic Representations of Climate Change Discourse and Their Individual and Collective Interpretations, or LINGCLIM.

The project concerns the role of language in the climate change debate and how language use on climate change is interpreted in different contexts. The issue of climate change is very complex and multifaceted, and we understood that we could not obtain answers to all the questions we wanted to ask through linguistic research alone. We therefore initiated a cross-disciplinary collaboration with climate, political, psychological and computational scholars. It was a highlight when we had a paper published in Nature Climate Change.”

"I would not have been a linguist today had it not been for Kjersti. I wrote my master's thesis on the French language in Lebanon, however this had a more sociological than linguistic approach.

One of the courses I took as part of the master's degree was on linguistic polyphony, a theory Kjersti was involved in developing. The theory states that there are certain linguistic markers indicating other voices than the one that is speaking. If you say “this wall is not white”, you also signal that there are others who believe it is white. This is particularly relevant in political rhetoric in order to see the underlying debates.

The retraining I underwent when I took a doctorate was therefore in large part thanks to Kjersti. After I completed my doctorate I needed a job and I was given a post-doctoral position on Kjersti’s LINGCLIM project. Shortly after this, I was offered a permanent position as Associate Professor of French linguistics at UiB.

The project has many aspects, with experts from various disciplines. Much of this is based on psychological surveys and major social scientific surveys such as the Norwegian Citizen Panel. Among other things, my role is to analyse the linguistic properties of what are known as white papers.

I did not know Kjersti before I began my master’s programme, but we became very well acquainted in the second semester. My impression of her was most likely the same as most students have: Very open and inclusive, and someone who shows a personal and professional interest in everyone she meets. I quickly gained the impression that she was very enthusiastic and that she was passionate about her academic field.

She is an excellent motivator, who makes learning enjoyable and has a lot of positive energy. She gives people a belief in what she is doing and that they themselves can push themselves and contribute to something great. Kjersti has been an important figure for many students in French language studies in Bergen. There are a number of students in French language studies who went on to get a doctorate and she was often their supervisor.

The LINGCLIM project is an example of how completely new paths can be travelled in connection with interdisciplinary work. I have been influenced in that direction myself and think about what is possible to study and how to achieve that based on what she has done. Kjersti is not restricted by any preconceived notions of how things should be done, but manages to combine creativity with a systematic and structured approach in everything the does. She is very generous academically and she does not jealously guard ideas.

The manner in which we collaborate is very open and honest. There is a high level of tolerance for saying something that perhaps has not been completely thought through and this is a major advantage because this does not inhibit creativity. You dare to expose yourself to those you know best.

At times I have struggled to keep pace with her capacity for work. What she has achieved has been and continues to be a huge source of inspiration for me.”

The article in print: My Mentor & I.pdf 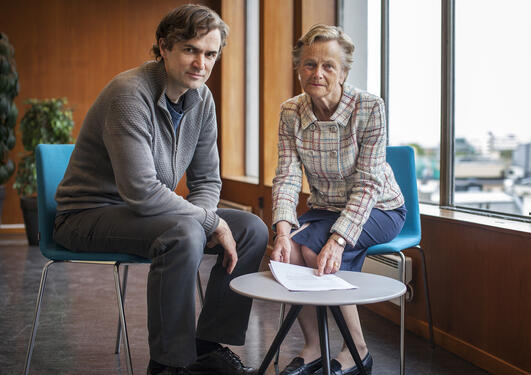 What you think about when you hear the words climate change

Using a new method, researchers in Bergen discovered that so-called climate sceptics are more ambivalent about climate issues than previously assumed. Their results have now been published in Nature Climate Change.