BIOMETRICS ON THE RISE: After the 9/11 attacks, there has been more and more focus on safety and identification of people. Today you can be recognised by your iris, fingerprints and voice, but in the future body odour, walk detection and behavioural traits may also be identified.
Photo:
Colourbox

“After 9/11, a number of security technologies were introduced without any further public and political debate,” says Professor Kjetil Rommetveit at the Centre for the Study of the Sciences and the Humanities (SVT) at the University of Bergen (UiB).

The project Technolife was supported by the EU's Seventh Framework Programme for Research (FP7). Rommetveit has been responsible for the project with Professor Roger Strand. Recently he presented results from Technolife at the seminar Narratives and imaginaries organised by SVT.

“We wanted to find new ways to discuss the ethical, social and legal issues related to new technologies,” Rommetveit explains.

Technolife has conducted a case study to examine the attitudes of biometric technology in Europe. The surveys were conducted between 2009 and 2011, before Edward Snowden leaked classified information from the security agencies to the british newspaper The Guardian.

Who have you talked to?

“Most of those who attended were recruited either at major technology trade fairs or on the Internet pages for persons concerned about new technology. Attempts to recruit participants from a number of Arab and Muslim communities in various European countries led to no response at all,” says Rommetveit.

Do people understand the full extent of the surveillance in modern society?

“Our research shows that people are able to understand many of the important factors in security and surveillance technology, but they are obviously not included in decision-making organs.”

Rather than the technology itself, the effect of new technology on society is of greater worry to most people.

“A part of this identification technology was introduced in the context of fear, and that it is not the best way to introduce new technology,” he suggests.

Part of the research project was to study the attitudes to biometric technology. Biometrics, also known as the ability to recognise and identify individuals from bodily characteristics, has become increasingly relevant. Since 2006, biometric passports are mandatory in Europe. This means that passports contain an electronic chip with a digital facial photo and personal information. Recently issued passports also increasingly contain fingerprints.

Technolife has used case studies to answer the ethical and political attitudes that exist for the new biometric developments.

“Today we get identified by fingerprints, iris scanning and voice and face recognition. There is also a drive to include more biometric data, such as DNA, recognition walk, body odour and identification of suspicious behaviour in public spaces,” says Rommetveit.

Already, experiments are conducted with biometric tunnels at the entrance of aircraft to uncover suspicious behaviour on the way into the aircraft.

We are all a potential threat

Respondents pointed to increased influence of large corporations and more power to government agencies that drives these changes in surveillance. In this system individuals may appear to be free, however, the trend towards increasing surveillance of whole populations.

“Some respondents questioned whether one can trust the authorities. Some believe that private life is under threat with increasing identification, and some express a wish to be on or off from being identified,” says Rommetveit.

“Some say they get associations to World War II and they are concerned what selected groups may become the target of the identification and surveillance.”

Rommetveit says that the study also made contact with people who think the issue is unproblematic.

“Some simply believe that this technology is here to stay and will make society more transparent and secure. They believe authorities use technology wisely and that identification measures are necessary to maintain certain security levels,” he says.

Rommetveit is concerned about the development of so-called second generation biometrics, which may include walk recognition, behaviour, odour or DNA recognition.

He believes a broader public debate should inform the regulation of biometrics, particularly in order to avoid the introduction of ethnic divisions.

“There is a high risk of abuse, also with regard to businesses that can create their own databases and who tag and control this type of information. Those who have access to these systems are often not civil rights activists,” he points out.

“I am particularly concerned about identification of suspicious behaviour in public spaces, and the use of characteristics which also have racial connotations, like skin colour, height or eye colour.”

But biometrics is not only a safety issue. Rommetveit points out that Facebook is one of the largest biometric systems we have today, and that the vast majority of users are by and large uncritical about the use of social media.

Do you think most people are aware of being identified on an increasing number of ways?

“I believe the development of biometrics and digital surveillance move faster than many people would like. The biggest consolation for those who worry may be that the technical and organisational complexity and do not work quite as good as planed,” says Rommetveitt. 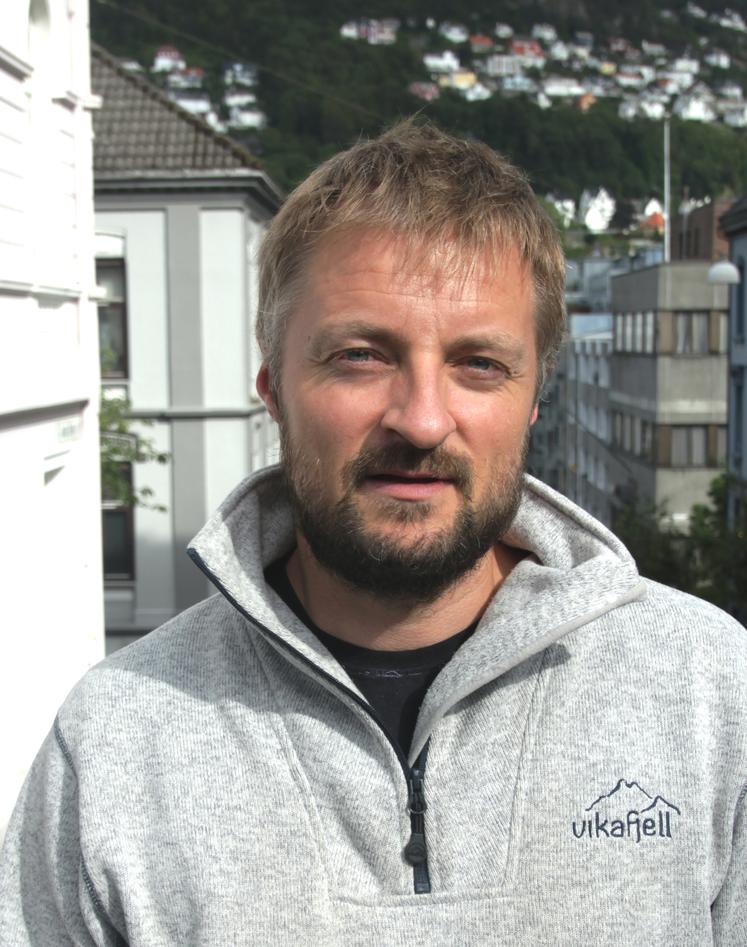 Kjetil Rommetveit, at Centre for the Study of the Sciences and the Humanities (SVT).
Photo:
Solfrid T. Langeland