Times Higher Education: UiB back in the top 200

The University of Bergen is ranked as number 182 in Times Higher Education World University Rankings 2015-2016, a jump of 41 places from last year.

TOP 200 UNIVERSITY: According to Rector Dag Rune Olsen, the fact that the University of Bergen scores highly in the citations category in the Times Higher Education ranking, shows the strong impact the university has internationally.
Photo:
Alf Edgar Andresen

Improving on all main indicators

The University of Bergen (UiB) has moved up 41 places compared to last year’s ranking, placing the university as 182 of the 800 universities evaluated. UiB improves in all five performance indicators. In particular, UiB excels in citations, or how often research from the university is cited by other researchers.

”The UiB is especially pleased by our increase in citations. This shows that our research has an increasing impact internationally,” says Dag Rune Olsen, rector of UiB.

Every year several rankings are presented. THE, QS World Universities Ranking and the Shanghai ranking are most commonly recognised. While UiB’s THE ranking is an improvement on last year’s ranking, both the QS and Shanghai rankings showed a slight drop in UiB’s ranking. These nuances can be explained by the fact that each ranking use different weighting methods when evaluating the world’s universities. This means that there are fluctuations from year to year and between the rankings based on tiny factors.

”The different methods applied show that the rankings can tell us part of our current academic standard, but does not cover every aspect of what we do. But they do give us a pointer towards how others view our achievements. At the same time, important parts of our academic expertise are not accounted for in the rankings, quality of education being one such example,” says Olsen.

For instance, while THE shows an improvement in UiB’s citations, the QS ranking showed a significant drop in the same category compared to last year.

Rector Olsen singles out UiB’s international outlook as one of the university’s great strengths. This is reflected in the THE ranking.

”UiB is among the universities and colleges with the most international employees in Norway. One in three of our PhDs are from outside of Norway. These international impulses improve the competition at our university and hence our research is strengthened,” says Olsen. ”This also puts Bergen on the world map as a Nordic centre for higher education and research." 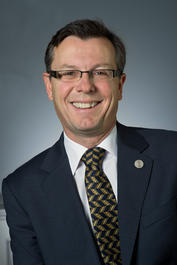