A playwright, a world renowned academic, a patron of science and a former American Vice President are conferred as the four new honorary doctorates at the University of Bergen.

AWARD CEREMONY: Author Jon Fosse (left) says he is grateful for the honorary degree. "Now I am not just a slob, I am also a doctor", he says.
Photo:
Ingvild Festervoll Melien

“To confer this award is one of the biggest days this year for the university,” said Dag Rune Olsen, Rector of the University of Bergen (UiB), at a special honorary doctor promotion at the University Assembly Hall on 2 October 2015.

An honorary doctorate is the highest honour the university can confer upon a person who is not employed by UiB. This type of doctorate is awarded for significant contributions or outstanding work to the benefit of science.

Traditionally, honorary doctorates are conferred upon people of importance to the university. These doctorates are usually awarded every other year, or when the University Board is of the opinion that a university anniversary or other occasions call for a special celebration.

“The tradition goes back to the Middle Ages and the University of Oxford in 1470,” said Olsen.

The first to accept the award was the author Jon Fosse. Jon Fosse is considered to be Norway's foremost contemporary writer and poet, and has for several years been mentioned as a candidate for the Nobel Prize in Literature. For over 30 years, he has made his mark as a highly original and prolific writer. In particular, he has created an international name as a playwright, and has consolidated his position as the most important Norwegian dramatist since Ibsen. Fosse is an alumnus of UiB.

“I have never considered taking a doctoral degree, so this award must be the only way. Now I'm not just a slob, I'm also a doctor,” Fosse said after receiving the honorary doctorate.

UiB is open to the world

Professor Helga Nowotny is professor emerita of Social Studies of Science at ETH Zurich. She was president of the European Research Council (ERC) from March 2010 until December 2013. Nowotny is a member of the Royal Swedish Academy of Sciences and has a range of awards from various European to universities.

“It is a great honour get his award. I consider the University of Bergen as very open to the world. I hope to have contact with UiB in the time to come as well,” said Nowotny.

Patron of science and the arts

Trond Mohn is a businessman and patron of the arts. His community development activities are wide-ranging and include donations to research, the arts and sports. The Bergen Research Foundation (BFS) was created in 2004 through a donation of 250 million Norwegian Kroner (NOK), or approximately 27 million Euros by current rates, from Mohn. Donations for research in Bergen also include the creation of the Bergen Medical Research Foundation, and Mohn has made substantial donations for medical equipment at Haukeland University Hospital in Bergen.

“My father always said: Remember that we are just ordinary people trying to do a decent job,” said Mohn at the special doctor promotion.

Walter F. Mondale is an American of Norwegian descent, with roots in Mundal in Fjærland in the municipality of Sogndal, north of Bergen. He was Vice President under President Jimmy Carter from 1977 to 1981 and was the Democratic presidential candidate in 1984 against Ronald Reagan. As a senator, he worked to establish legal aid for ordinary Americans, and he also took an active part in the civil rights movement to secure African Americans equal rights with Caucasians within the Democratic Party. UiB’s Faculty of Law currently cooperates closely with the University of Minnesota Law School. Mondale has been actively drawn into this work, which he will help to promote.

Sverre Mauritzen accepted the award on behalf of Mondale.

“He is deeply grateful for the award and the ability to cooperate with the Faculty of Law at the University of Bergen,” said Mauritzen at the award ceremony. 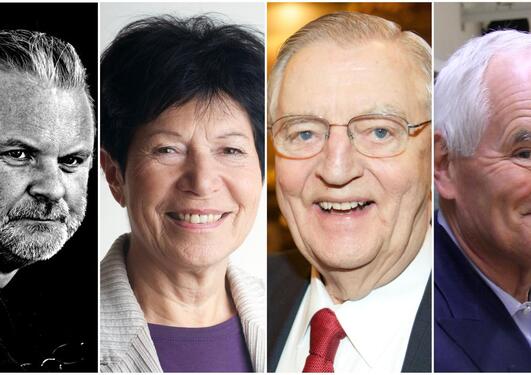 Author Jon Fosse, Professor Helga Nowotny, former US Vice President Walter F. Mondale, and patron of the arts and science Trond Mohn have been made honorary PhDs at the University of Bergen (UiB).