Our man in Brussels

Do you want your science to be more visible in Brussels? Then you should get in touch with Kristof Vlaeminck. Meet the University of Bergen’s man in Brussels.

KRISTOF IS HERE TO HELP: UiB’s new man in Brussels, Kristof Vlaeminck, believes the university should be more proud and point out its success rate in the EU’s funding programmes.
Photo:
Kim E. Andreassen

In September 2015, the University of Bergen (UiB) opened its Brussels office, a physical meeting point for UiB-researchers in the European capital. Researchers can visit the office to work on their proposals and organise meetings with partners or members of the EU Commission.

“I am trying to help UiB-researchers to better understand Brussels. Together with my colleagues at the Division of Research Management in Bergen, we are trying to assist the researchers who are applying for European funding, ” says Kristof Vlaeminck, UiB’s man in Brussels.

Many grants to apply for

Kristof Vlaeminck was employed as UiB’s contact person in Brussels in May 2016.

He suggests that researchers also look at funding opportunities other than the customary European Research Council (ERC) or Marie Curie grants in the EU’s Horizon 2020 programme (H2020).

“For the researchers there is a lot of potential in two other pillars of H2020, Industrial leadership and Societal challenges,” says Vlaeminck about two programmes designed to appeal respectively to biotechnology-nanotechnology and health, environment and climate change.

Vlaeminck will make UiB more visible in Europe in general because he believes there is some discrepancy between UiB’s success rate in EU funding and the university’s international visibility.

“The university is not as commonly known in the world as it should be. This is a shame, because of the university’s success rate in general,” he argues.

Vlaeminck points to the fact that UiB has a success rate of one out of three when it comes to applications to the H2020 programme. In general it is one out of ten. He believes it is vital for UiB to stress this success rate more strongly to improve future performance in the funding race.

To gain visibility, Vlaeminck wants to bring more UiB researchers to events organised by the EU commission in Brussels. These are events where the researchers can promote their science in pitches of five to ten minutes.

“It is very important to let the right people get to know you and your work. Since UiB now has an office in Brussels, we can arrange our own promotion events,” Vlaeminck says.

“The best way of being visible is to tell the world that we have a success rate of one out of three in H2020. Keep up the good work and you will get noticed.”

A change of mind-set

However, to succeed with any grant at the European level, Vlaeminck believes some researchers need to change their mind-set. It is important to look beyond your own specific research project or PhD theory. When applying for EU funding, researchers need to define their research specifically to have a chance of being successful.

He points out that there is still a lot of scope for UiB researchers to work with partners in industry.

“For a product or a service to hit its designated market, a lot of research needs to be done. In this area, a university such as UiB play a big role, for example in ethical studies,” he says adding that UiB’s priorities fit very well with the priorities of the EU,” Vlaeminck says.

“UiB is doing the exact research that the EU Commission is interested in, like societal challenges, climate change and a focus on environmental studies in general and ethical studies more specifically,” says Kristof Vlaeminck, pointing to the fact that more and more companies are concerned about both their environmental impact and ethical concerns among the public. 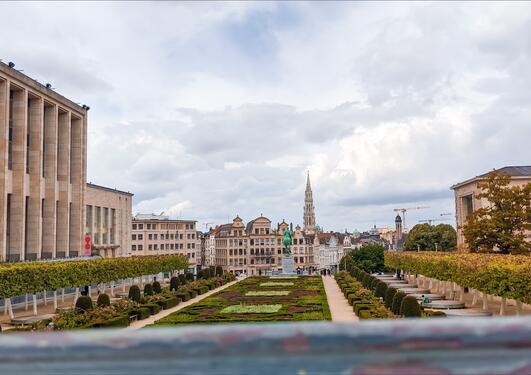