Warm ocean water of open ocean origin is continuously flowing into the cavities below the ice shelves in the Amundsen and Bellinghausen Sea, west of the Antarctic peninsula, thus melting them from below. New observations recently published in Nature Communications show that warm deep water also reaches the large Filchner ice shelf in the southern Weddell Sea. This ice shelf is located in a “cold” part of Antarctica, where the water on the wide continental shelf separating the ice shelf from the deep ocean mostly is at or below the surface freezing point of -1.9C and melt rates below the ice shelf is accordingly low.

– We know that pulses of warm deep water are lifted up on the continental shelf during summer, but the warm water has never before been observed as far south as the Filchner ice shelf. Our observations show that the warm water intrusions continue to flow southward during the autumn, reaching further south than what we previously thought. We don’t know how much of this water that enters the ice shelf cavity, but the strong tidal currents in the region will bring it at least a couple of kilometers into the cavity, says Elin Darelius, researcher at the University of Bergen, Uni Research and the Bjerknes Centre.
– This is probably not a new phenomenon; we simply have not observed it before. The southern Weddell Sea is covered by heavy sea ice during winter and our research ships can only access the area during the short Austral summer. During the summer cruises we observe the summer inflow of warm water onto the shelf, but when it reaches the ice shelf front a couple of months later we’re long gone.

In January 2013 Elin Darelius led a scientific cruise onboard a British ice breaker to the Filchner ice shelf. They installed instrumentation to measure temperature, salinity and currents in the water just north of the ice shelf front. A year later the instrumentation was recovered and the results are sensational enough to be published in Nature communications.

The new observations can also explain what drives the southward flow of warm water: it is driven by the wind. When the wind blows along the coast in the east, it sets up a current that then follows the topography southward towards the ice shelf.

– There is a clear connection between the currents we observe and the wind. When the wind picks up, it takes about 15-20 hours for the ocean current build up, explains Darelius.

In 2011 a dozens of Weddell Seals in the region were equipped with oceanographic sensors, and one of them chose to spend the winter at the Filchner Ice shelf front. Every time it dove to the bottom in search of food the oceanic properties were registered. During that winter, no warm water was observed to reach the ice shelf front. According to Darelius, it is the wind that determines how much warm water that enters the continental shelf and how far south it reaches.

A group of German researchers have earlier presented results from a climate model suggesting that the relationship between the wind and the warm inflow will cause the inflow to increase as the wind forcing changes in the future. The melt rates below the Filchner ice shelf would then increase dramatically. Their results have been questioned since the model that was used is relatively coarse, but Darelius points out that the new observations show that the relevant mechanism appears to be correct.

This article is also published by Bjerknes Centre for Climate Research.

Moving ice from land to sea

The ice shelves that fringes Antarctica are typically hundreds of meters thick and they are the floating extension of the thick ice sheet inland that covers more than 98% of Antarctica. In the German predictions the ice shelf melt increases dramatically. The ice shelf then thins, and it can no longer hold back the inland ice which accelerates towards the sea. As ice is moved from land to the sea the sea level rises.

The contribution to sea level rise from the melting of Antarctic ice is expected to increase in the future, but the uncertainty regarding the rate and quantity is large. Researchers from Germany and the UK are currently leading a large European project around the Filchner ice shelf of which researchers from Bergen and the Bjerknes center are a part.

– We are installing instrumentation below, within, on and in front of the Filchner ice shelf. We need to understand how the system functions today to be able to say something about how it might change as our climate change, says Darelius.

In January she returns south to install new instrumentation, this time together with a French expedition. Meanwhile, her colleague Svein Østerhus at Uni research will join a German group that are to drill through the ice to install oceanic instrumentation in the ice shelf cavity. 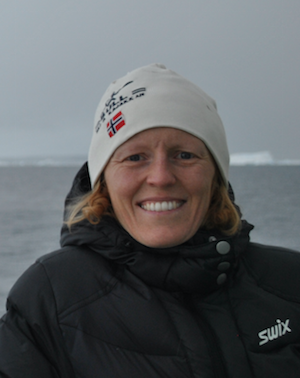