Adult saithe (Pollachius virens) are a top predator in the North sea, but spend their first 2-3 years near underwater islands and shallow sills, where the current concentrates e.g., Calanus copepods. Through their entire life, saithe may filter and eat plankton, but, when large enough, will happily eat juvenile herring, haddock, and cod after the spring plankton bloom has declined.

Spatial and temporal changes have been observed in the plankton community in the North Sea in the last decade. Such shifts are thought to influence the diet, and therefore growth, of saithe more than any other gadoid.

A collection of stomach samples from two North Sea bottom trawl surveys (IBTS Q1 and IBTS Q3) and an acoustic coastal survey for pre-recruited saithe from 2009–2012 was begun after saithe stock production showed a decline in the North Sea (Fig. 1).

One Master’s project will determine if change in saithe growth may be driven by changes in prey abundance. A temporal analysis of stomach contents from trawl catches may reveal changes in the diet of saithe. Temporal trends in partial fullness indices of different sized prey can be used to indicate community change; similar indexes may be used to analyze changes in somatic growth.

Another Master’s project will determine if the distribution of saithe has changed over time and if observed changes are related to spatio-temporal changes in prey abundance. The project will use data from the IBTS and saithe acoustic (NORACU) surveys.

Both projects will require close collaboration with the Institute of Marine Research. There is an opportunity to join the IBTS Q3 survey (July) to collect additional stomach samples, if desired. The projects are open to Masters students in Marine biology, Fisheries biology, Biodiversity, evolution and ecology, and Fisheries biology and management. 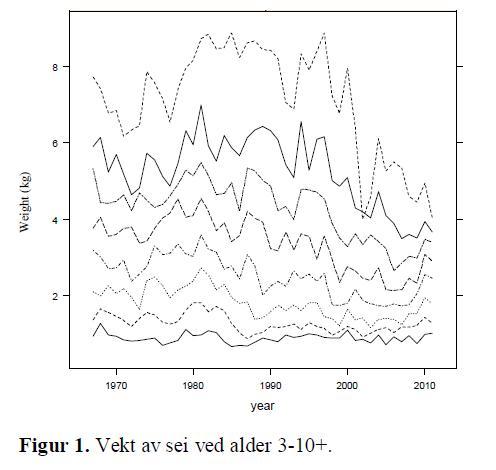