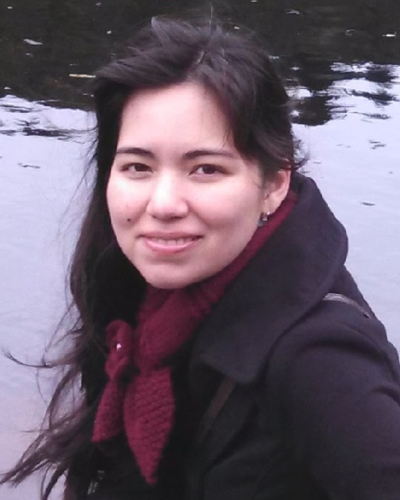 Ana Ozaki is an associate professor at the University of Bergen, Norway. Her research area is Artificial Intelligence (AI). She is an AI researcher in the field of knowledge representation and reasoning and in learning theory.

Ozaki is interested in the formalisation of the learning phenomenon so that questions involving learnability, complexity, and reducibility can be systematically investigated and understood. Her research focuses on learning logical theories formulated in description logic and related formalisms for knowledge representation.

She is a member of the editorial boards of the Journal of Machine Learning Research and the Journal of Web Semantics. She has recently worked as Program Committee Chair for the 27th International Symposium on Temporal Representation and Reasoning.

Ozaki is fascinated by learning and reasoning processes and how they interact.

There is a mode of learning which is actually how we learn very often but that is not the mode of learning we refer to when we talk about machine learning. We learn very often by posing queries (questions). Our intuition is that by obtaining answers to our questions from a teacher we can learn faster and better (more accurately) than by randomly selecting learning material. In learning theory, one can show that learners can efficiently exactly identify an unknown target concept formulated e.g. as a deterministic finite automaton, a decision tree, or a set of Horn rules if they can pose queries to a teacher.

Ozaki is currently working with her team on strategies to learn Horn rules from neural networks by posing them queries. She believes that exciting and recent advances in machine learning need to be complemented with theoretical development so that systems can provide formal guarantees of classification results and become trustable.

Neural networks have been applied in many areas. However, any method based on generalizations may fail and this is by design. The question is how to deal with such failures. To limit them, one can define rules that a neural network should follow and devise strategies to verify whether the rules are obeyed. The main tasks of this project are to study an algorithm for learning rules formulated in propositional Horn, implement the algorithm, and apply it to verify neural networks.

Exact Learning: On the Boundary between Horn and CNF by Hermo and Ozaki (ACM TOCT 2020).

Knowledge graphs can be understood as labelled graphs whose nodes and edges are enriched with meta-knowledge, such as temporal validity, geographic coordinates, and provenance. Recent research in machine learning attempts to complete (or predict) facts in a knowledge graph by embedding entities and relations in low-dimensional vector spaces. The main tasks of this project are to study knowledge graph embeddings, study ways of integrating temporal validity in the geometrical model of a knowledge graph, implement and perform tests with an embedding that represents the temporal evolution of entities using their vector representations.

Decidability and Complexity of Learning

Gödel showed in 1931 that, essentially, there is no consistent and complete set of axioms that is capable of modelling traditional arithmetic operations. Recently, Ben-David et al. defined a general learning model and showed that learnability in this model may not be provable using the standard axioms of mathematics. The main tasks of this project are to study Gödel's incompleteness theorems, the connection between these theorems and the theory of machine learning, and to investigate learnability and complexity classes in the PAC and the exact learning models.

In artificial intelligence, ontologies have been used to represent knowledge about a domain of interest in a machine-processable format. However, designing and maintaining ontologies is an expensive process that often requires the interaction between ontology engineers and domain experts. The main tasks of this project are to study an algorithm for learning ontologies formulated in the ELH description logic, implement the algorithm, and evaluate it using an artificial oracle developed in the literature that simulates the domain expert.

Binarized neural networks (BNNs) have recently attracted a lot of attention in the AI research community as a memory-efficient alternative to classical deep neural network models. In 2018, Narodytska et al. proposed an exact translation of BNNs into propositional logic. Using this translation, various properties such as robustness against adversarial attacks can be proved. The main tasks in this project are to study BNNs and the translation into propositional logic, implement an optimised version of the translation, and perform experiments verifying its correctness.

Autonomous systems, such as self-driving cars, need to behave according to the environment in which they are embedded. However, ethical and moral behaviour is not universal and it is often the case that the underlying behaviour norms change among countries or groups of countries and a compromise among such differences needs to be considered.

The moral machines experiment (https://www.moralmachine.net/) exposed people to a series of moral dilemmas and asked people what should an autonomous vehicle do in each of the given situations. Researchers then tried to find similarities between the answers from the same region.

The main tasks of this project are to study the moral machine experiment, study and implement an algorithm for building compromises among different regions (or even people). We have developed a compromise building algorithm that works on behavioural norms represented as Horn clauses. Assume that each choice example from the moral machines experiment is behavioural norm represented as a Horn clause. The compromise algorithm is applied to these choices obtained from different people during the moral machines experiment. One of the goals of this project would be to determine how to (efficiently) compute compromises for groups of countries (e.g., the Nordic Countries and Scandinavia).

Own topic combining logic and learning

My record track, from 2014 until now, is of 1 book chapter and over 40 peer-reviewed journal, conference, and workshop publications. Most publications have the author list in alphabetical order.

Ana Ozaki is the principal investigator of the project Learning Description Logic Ontologies funded by RCN. The goal of this project is to study and develop new automated strategies for building ontologies. Ontologies can be understood as an unambiguous way of representing knowledge. The project has two main objectives. The first one is to extract knowledge from neural network models (NNs) by posing them queries. In this way, one can discover hidden rules encoded in NNs and represent them as an ontology. The second objective is to design ontology languages that approximate the expressivity of NNs and learn ontologies formulated in these enriched languages.

She is the leader of the Machine Learning Theory Work Package for the project "Machine learning for computational efficient predictions of long-term congestion patterns in large-scale transport systems" funded by RCN. The main goal of the project is to develop an AI-based sketch planning model that can reliably and quickly predict congestion patterns in complex transport systems for the present and future scenarios, varying traffic growth and road capacity.

She is a member of the Center for Data Science (CEDAS) at the University of Bergen.
Through the Momentum Program, she is currently working to expand her network of collaborators and to support research projects in her team.