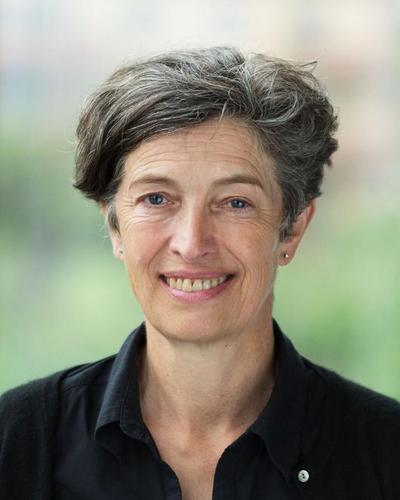 Ashley Booth is Professor of Visual Communication and has taught at the Department of Design since 2006. Booth is a British citizen, but has long experience as a graphic designer in Norway. She has worked as an art director for A-magasinet, a weekly magazine supplement to one of the major Norwegian dailies, and as head of graphic design for the Lillehammer Olympic Organizing Committee (LOOC), which developed the visual profile for the Winter Olympics in 1994. From 1994 until 2010 she ran her own company, Ashley Booth Design (ABD).

The focus of Booth’s artistic research has been on pictograms linked to a fascination with trash, but also on what it means to be a human being with daily challenges. Booth’s point of departure is the notion that designers and creative professionals have a responsibility as well as the ability to bring about real change and improvement in the world through good design.
By using a pictogrammatic language as a visual tool, Booth wants to investigate the classification of values in a cultural, social, philosophical and political context, a visual assessment of what is worthless, nonsensical or trash, and what is considered valuable and non-trash.

Booth is involved in Pictogram-Me, a research project at KMD Bergen, Department of Design, funded by the Norwegian Artistic Research Programme. By using pictograms, the research aims to contribute contribute to increased reflection on the complexity of life and to highlight the experiences of people with a challenging existence. Pictogram-Me is inspired by Isotype (International System Of TYpographic Picture Education), a symbol system developed by Otto Neurath to explain and illustrate social and economic issues to the general public.