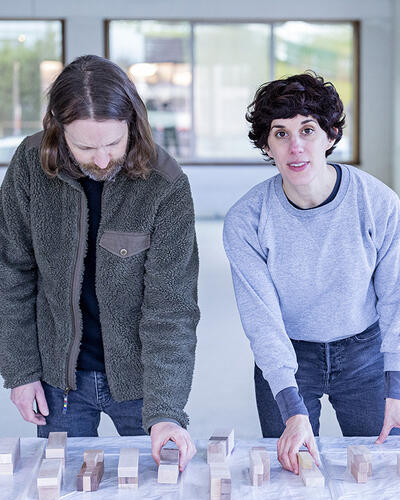 Chloe Lewis is a Canadian, Bergen-based artist, writer, and educator. She joined KMD in 2021 as Associate Professor of Sculpture and Installation.

Since 2006, Lewis has worked in close collaboration with fellow artist Andrew Taggart, exploring the intersections of sculptural, literary, and craft-based forms. Together, they exhibit under two designations: as the artist duo Lewis & Taggart and as the Museum of Longing and Failure (MOLAF), an experimental platform with a focus on object-based practices.

Within these frameworks, Lewis' work has been presented at venues such as La Fonderie Darling, Montreal;  Hamburger Bahnhof, Berlin; Looiersgracht 60, Amsterdam; Kunstnerforbundet, Oslo; Entrée, Bergen; The Centre for Art Nouveau, Ålesund; ISCP, New York; Syntax, Lisbon; The Symptom Project, Greece; The Centre for Contemporary Art, Warsaw; Cricoteka, Krakow; and Kunstverein Leipzig, Germany, among many others. She is the recipient of numerous awards and international artist residencies, including a studio award at the Banff Centre, Alberta and the Canada Council for the Arts residency award at Künstlerhaus Bethanien in Berlin, Germany.

Lewis regularly produces artist books, which have been published by institutions such as Pamflett, Bergen; Platform, Vaasa; and The Rooms, Newfoundland. Her books are held in several collections including MoMA Artists’ Books, New York; Artexte, Montreal; The National Library of Norway; and the Paul D. Fleck Archives, Canada.