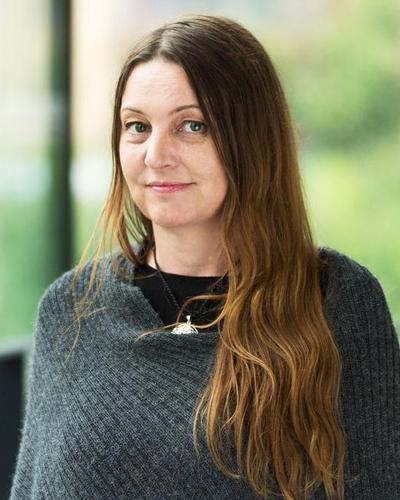 Dora Isleifsdottir is Professor of Visual Communication. She is educated in Iceland, apart from a short jaunt to Copenhagen, as an exchange student, her BA equivalent in Visual Communication is from the Icelandic College of Arts and Crafts (now Iceland Academy of the Arts), and her MA in Practical Editorship and Theory of Publication is from the Department of Icelandic and Comparative Cultural Studies, School of Humanities, at the University of Iceland.

Isleifsdottir authored and program directed the MA in Design at Iceland Academy of the Arts, where she previously taught and worked for eighteen years from 1999, first as part-time lector, and then, from 2006, as Program director for Visual Communication, as Lector from 2009, then as Professor of Visual Communication from 2012, and Program director of the trans disciplinary MA in Design from 2013 until 2017. She has also taught for some years at the University of Iceland, and advised graduating students writing their thesis there and at the University of Bifröst. Previously and parallel Isleifsdottir has a career as a graphic designer in advertising and branding, where she has acted as graphic designer (Sjöundi himinn and East End Image Factory), art director (Fíton and Gott folk) and creative director (Gott folk McCann-Ericson), and owner and creative director of her agency, Fastland.

Isleifsdottir’s teaching, and artistic research through design, finds its nexus in the grayscale of meaning in Visual Language and Expression, particularly in the search for a semiotics of typography and type, but looking, also, at the emotional misguiding or manipulations of paradigms explicit in branding, when used in the service of politics and, often, in the commercial. Ísleifsdóttir’s search for meaning is grounded in the methodologies and ideas of metadesign and metamodernism, but quite clearly in her experience in branding and advertising as well. She has applied these ideas and methodologies in practice, in the design of study programs, and in art projects and collaboration, such as the Ether project, the Universities House of Ideas, Alda – association for sustainability and democracy, etc.

Isleifsdottir sees the current state of meaning in the world as ‘ofljóst’ (in Icelandic), which literally translates to ‘too illuminated’ or having an induced meaning, subjective in nature, and/or dependent on situation and/or relationship, i.e. dependent on the recipient and her relationship with the exterior and meaning’s (prior) travels in it.

Isleifsdottir, herself, claims to be a design generalist, however her work can be read as consistently and simultaneously critical and aspirational; rational and blithely emotional; dead dry and utterly foolish; there is radical optimism to be found in the works of the Icelandic Love Corporation during her time with the group; a hope for unity and poetry in life runs through her personal work and her activities within academia, including her continued design activism participation and initiatives. There is nothing speculative to her action, it is filled with sense, grace, and trust in the human spirit and a profound willingness to do better, if and when models of required or desirable actions are available. Isleifsdottir’s hope is to be of use in the making of such models, and in the nurturing of like-spirited creative people, projects, and actions.