Millennia of human activity around Lake Victoria have fragmented and degraded the once-extensive moist broadleaf forest. Despite legal protection through a network of forest reserves, pressure on these forests increases, both from illegal timber and charcoal production and from clearing forests for agriculture and housing. The Matrix project is a collaboration between Bergen University and Makerere University in Uganda. The team assessed the impact of forest fragmentation on diverse species groups: butterflies and moths, birds, monkeys, bats, trees and ferns. The project also included a legal component looking at reasons for forest clearance and the impact of legal frameworks for ownership.

Forest biodiversity is known to be severely affected by habitat disturbance (both past and ongoing), habitat fragmentation, and land-use intensity in the surrounding landscape. The relative balance of these influences and their importance to different species groups is under-recorded, particularly in the tropics. We focussed particularly on the last aspect -the land use surrounding habitat patches is called the 'matrix' by ecologists so this is how the project got its' name. The matrix can influence movement between patches, edge effects within forest patches, and can contain resources such as food.

The team assessed the impact of forest fragmentation on diverse species groups: butterflies and moths, birds, monkeys, bats, trees and ferns. The project also included a legal component looking at reasons for forest clearance and the impact of legal frameworks for ownership.

We have investigated how quickly plants recover from disturbance, and how fragment size affects the diversity of ferns. We have recorded both structural and compositional changes of the tree community in small fragments around the city of Kampala - urbanisation and the attendant need for housing, food and recreational facilities mean that around half of the fragments have been lost since 1990. The structural changes mean that the above-ground biomass (and therefore stored carbon) has also dropped significantly in the more disturbed forests. Fortunately, the reserves seem to be at least partly protected from this loss, though there are some concerns about forest security. Within the same set of fragments, the red-tailed monkey population was resurveyed and compared with 1995 data. In the remaining fragments, the group sizes were significantly smaller in 2012 than in 1995 and the groups contained fewer juveniles.

Reserved or protected forests should be expected to fare better than unprotected fragments. However, within reserves in southern central Uganda, we have recorded consistent losses of moth diversity over 20-40 years in three very different forests. Zika, Mpanga and Mabira are all legally protected, but very different in size and surroundings; all three have lost moth diversity. Of the two moth groups studied, the shorter-lived group has suffered the greatest losses which we think is due to their lower capacity for dispersal. No historical data for butterflies were available, so instead we used different aged forest areas and the known habitat preferences of the butterflies we caught. We found that secondary forest has a lower species diversity and a greater proportion of generalist species than more undisturbed forest. The forest age-gradient was also used to look at different plant species groups - the composition of ferns, shrubs and trees is affected by forest age but there are few 'specialist' species and no significant difference in species richness. We suggest that the species remaining in Mabira forest are mostly those already adapted to disturbance.

We travelled further west, to the Budongo Central Forest Reserve and the surrounding fragments, in order to study the impact of the matrix (what kinds of land-use surround the forest). Different aspects of fragmentation (isolation, patch area, and matrix cover) appear to have a cumulative effect on bird communities. In fragments far from the main forest and surrounded by sugar cane, bird abundance is lower and the proportion of particular guilds (especially ground-nesting insectivores) is lower. There is no change in species richness, suggesting forest specialist species are replaced by generalist species with increased habitat fragmentation. Forest protection for Uganda's reserved and protected forests remains a priority, especially as the larger units protect species and communities not found in the smaller fragments. People living in around these fragments lack suitable incentives to protect the reserves, and we found that they were demotivated by the lack of support in protecting the forest from intruders. However, the fragments themselves play a role even for rare and red-listed species. The existence of such fragments was found to depend less than expected on the security of land ownership - forest owners with clearly defined boundaries, good relationships with neighbouring landowners, and clear aims for their forest were more likely to protected their forest land and not sell it.

The final aim of the MATRIX project will be to successfully communicate the implications of this to Ugandan forest owners, policymakers and other stakeholders. Systems such as REDD+ pose opportunities for some people, but risks for others, particularly people living in and around forests which they do not own. Effective protection of reserve forests remains a priority and a challenge, but we have shown how smaller fragments can play a role in species conservation.

This text has been adapted from the final project report submitted to the Norwegian Research Council at the end of the project in 2014.

A list of publications and presentations resulting from this project can be found on the right (MatrixOutput.pdf). 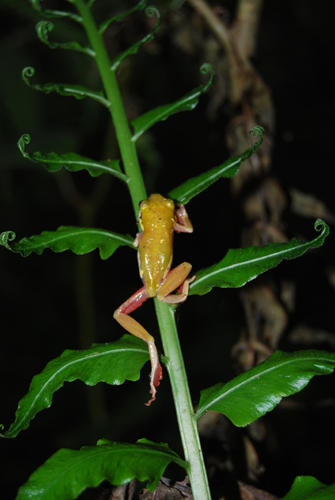 A yellow frog on a fern frond
Photo:
Jenny Reïniö 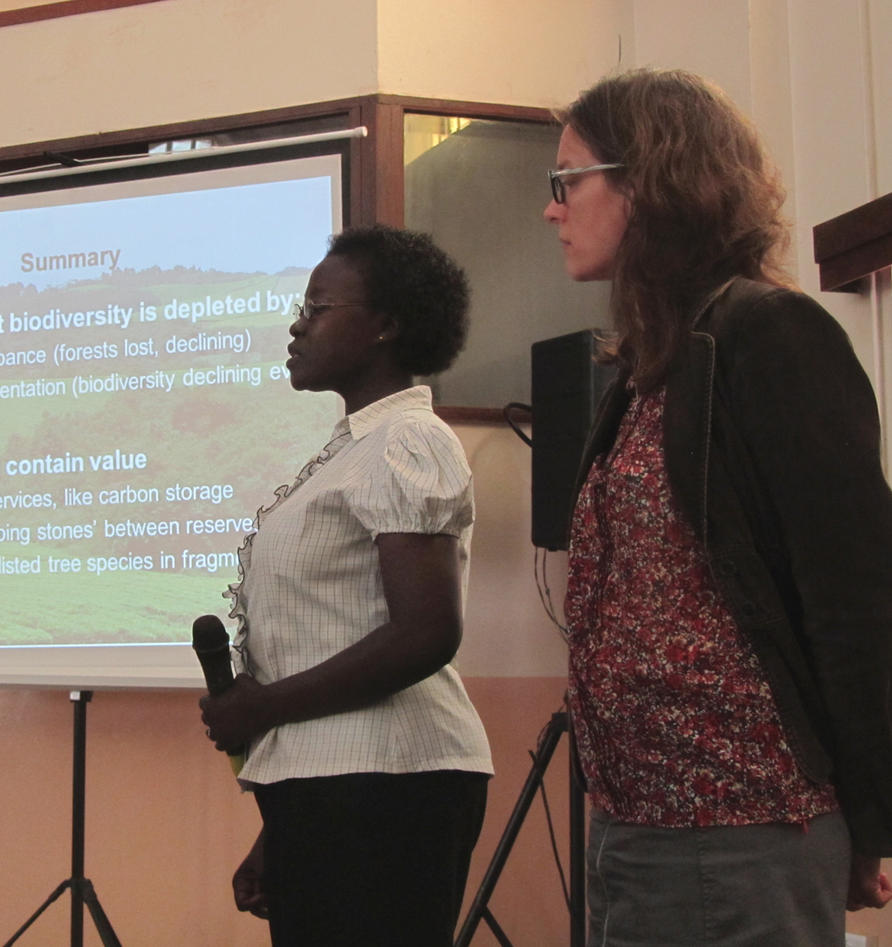 Josephine Esaete and Vigdis Vandvik present the project findings at the 25th anniversary of the Bergen-Makerere collaboration
Photo:
Amy Eycott 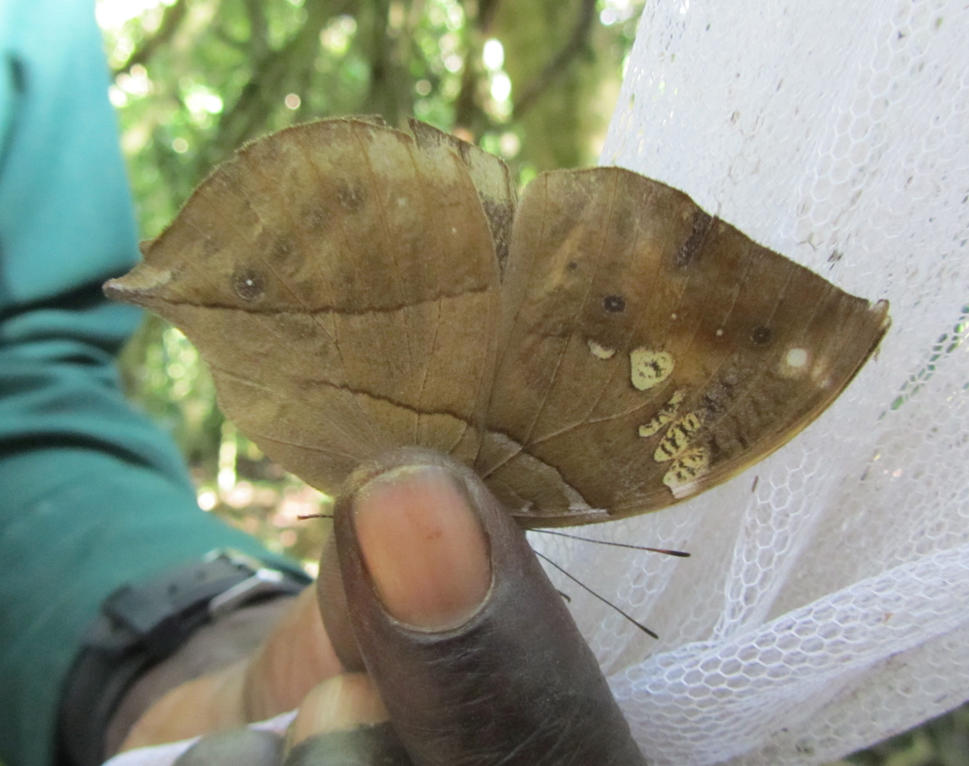 Not a leaf but a butterfly, trapped in Kibale forest in Uganda. Forest butterflies can venture out into the surrounding landscape, but need resources and shelter to do so
Photo:
Amy Eycott 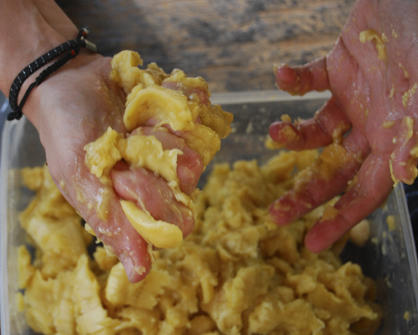