Multi-proxy studies of the responses of biota and ecosystems

The lake at Kråkenes which has been well studied as its sediments extend back to the late-glacial
Photo:
Hilary Birks

The pattern of climate changes at the end of the last glacial period was discovered in south Scandinavia during the last century. In a warming period, named Allerød, arctic tundra was replaced by birch woodland and organic sediments were deposited in lakes. The Scandinavian ice sheet (SIS) retreated from its maximum extent. In a subsequent reversal to cold conditions, the Younger Dryas, arctic plants (typified by Dryas octopetala) replaced birch woodland and the SIS re-advanced. Pre-Allerød warming and cooling, Bølling and Older Dryas, were described later. These climatic events are recognised widely in northwest Europe and beyond but they are particularly well marked in Scandinavia and the British Isles

Multi-proxy studies using many independent lines of biological and geological evidence are needed to quantify the complex late-glacial climate changes and their diverse effects on ecosystems. The most detailed multi-proxy study is at Kråkenes, on Vågsøy. Following earlier work on cirque glacier development and vegetation history, a multi-disciplinary programme involving 24 scientists from 5 countries studied the biological proxies of pollen, plant macrofossils, mosses, diatoms, chironomids, beetles, Cladocera, caddis flies, and oribatid mites and the physical proxies of sediment composition and structure, palaeomagnetism, atmospheric CO2 reconstruction from stomatal density of fossil leaves, tephra analyses, and very high resolution AMS 14C dating. The results are described in over 28 publications. The latest, in Nature Geoscience (2009), combines the high resolution XRF titanium record in the sediments (influenced by erosion in the cirque behind the lake) with previous temperature records from Kråkenes and the neighbouring sea, to demonstrate stable cold climate in the early Younger Dryas (YD). After the Vedde Ash layer was deposited at 12120 cal yr BP, the climate oscillated between warmer and cold conditions, culminating in the major warming at the start of the Holocene. These results contributed to understanding the synoptic circulation patterns and processes during the YD over northwest Europe and the force behind the rapid switch (5-10 years) to the interglacial climate of the Holocene.

Our high-resolution chronology is pivotal at Kråkenes. From it, the age of the YD-Holocene boundary was determined to 11,530 ± 50 cal yr BP, a crucial stratigraphic age point. Two Icelandic tephras, the Vedde and Saksunarvatn ashes, were precisely dated allowing their use as time markers in other sediment sequences. The ages, causes, and rates of change in the biota and ecosystems through the Allerød-YD and YD-Holocene boundaries and the succession of ecosystem and biodiversity development in the early Holocene were determined. The transformation from tundra to shrub-dominated vegetation within 50 years shows the potential for biota to react to rapid climate warming, such as we are experiencing today.

Jansvatnet in Hammerfest is probably the most northerly terrestrial late-glacial site in the world and is currently under study. Vegetation responses (plant macrofossil and pollen analyses) and lake responses (diatoms and chironomids) demonstrate an arctic climate during the Allerød and even colder conditions during the YD. Temperatures were inferred from the changing chironomid fauna. The length of the ice-free season on the lake was reconstructed from the diatom record, the first time this has been achieved during the late-glacial. The transition to the Holocene was rapid. At present, birch trees are at their northern limit here, but they were much more abundant in the early Holocene. These warmer temperatures decreased to those like today after about 1000 years. Tree birch arrived some 1200 years after the start of the Holocene, whereas at Kråkenes the lag was about 650 years. These migrational lags need further study.

At Lusvatnet on Andøya, northern Norway, plant macrofossil and pollen analyses show vegetation responses to the late-glacial climate changes, as part of the ongoing ARCTREC (ARCTic RECords of climate) NFR project. Like Jansvatnet, the Allerød was cold compared to further south. Holocene birch woodland was established after about 1000 years. Mean July temperatures will be inferred from the chironomid record and by a newly developed method using plant macrofossils. Using climatic and vegetational reconstructions from Lusvatnet, Kråkenes, etc., the glacial history of Andøya, marine records from the Norwegian Sea, and the Greenland ice-record, and palaeoclimate modelling, ARCTREC will attempt to synthesise the complex synoptic climate changes in atmosphere and ocean through the glacial-Holocene transition including the warmest period before 7000 years ago in the north Norwegian area.

Outside Norway, the approach of reconstructing chironomid-inferred temperatures pioneered at Kråkenes has been applied to two late-glacial sites and combined with past glacial activity to reveal a strong oceanic–continental gradient from the Isle of Skye on the west coast to the Cairngorm Mountains in eastern Scotland. The Cairngorm site, Abernethy Forest, has a well-studied late-glacial pollen and macrofossil history. Several tephra layers have been recognised in the new cores and been precisely radiocarbon dated on associated terrestrial plant remains. The oldest, the Borrobol tephra, has been securely dated for the first time and is now a good chronostratigraphic marker, particularly for marine late-glacial cores where accurate 14C dating is difficult.

Birks, H.H., Battarbee, R.W. & Birks, H.J.B. (2000) The development of the aquatic ecosystem at Kråkenes Lake, western Norway, during the late glacial and early Holocene - a synthesis. Journal of Paleolimnology 23, 91-114. 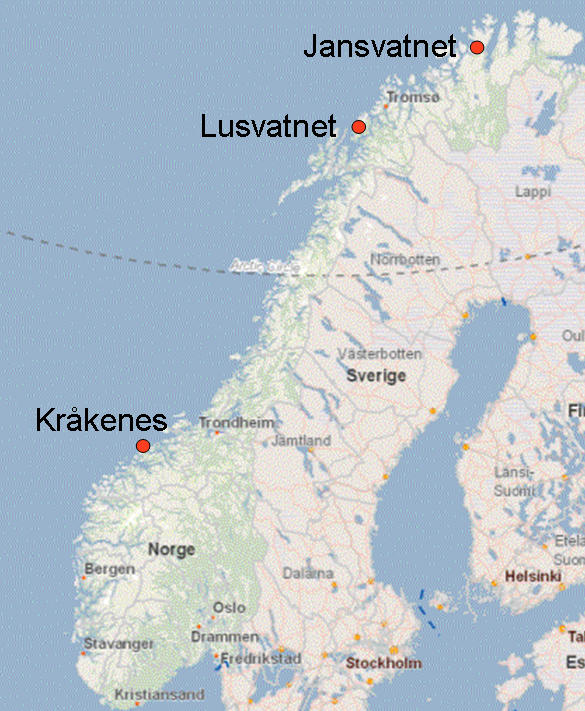