In the Kharta area, Tibet, the monsoon clouds cross the Himalaya and spread a little to the west, permitting forest growth. As the monsoon effect decreases further west, climate becomes drier and the the vegetation becomes steppe and finally steppe-desert.
Photo:
John Birks

The Tibetan Plateau is one of the most isolated regions on earth and is the largest and highest in the world – ‘The Roof of the World’. It has an average altitude of 4000 m, with large areas over 5000 m. It covers an area of 2.3 million km2; nearly the size of western Europe. It has a major impact on the climate of central Asia. Being so high, atmospheric pressure there is about 50% less than at sea-level. As a result, it is a huge elevated summer heat source that greatly influences atmospheric circulation. Its arid climate results in few clouds and strong solar heating. A large area of low pressure is formed due to this strong heating and resulting air uplift. This draws moist air inland off the Indian Ocean, giving rise to the Asian and Indian summer monsoon systems. In contrast, winters are dry and cold as winds blow out of central Asia under the influence of the Siberian high pressure area. The annual cycles of summer monsoon arethus an atmospheric response to seasonal changes in thermal heating between land and ocean. Little of the summer monsoon rain crosses the Himalayan mountains on the southern edge of the Tibetan Plateau. There is thus a massive rain-shadow effect and as a result the Plateau has extreme dryness with a total annual precipitation of about 200-500 mm. A harsh landscape of mainly high-altitude steppe, semi-desert, or desert results. The Plateau has, as far as is known, been subject to human activity and associated yak grazing for at least the last 6000 years.

EECRG PhD La Duo (now at Tibet University, Lhasa), Hilary Birks, Jacqueline van Leeuwen (formerly at Bern), and John Birks worked on peat deposits in south-central Tibet. Using pollen, macrofossils, and fungal spores, they showed that this area of Tibet supported some open woodland and scrub about 6000-10000 years ago up to an altitude of 4300 m, consisting of Juniperus, Betula, Salix, Pinus, Picea, and Hippophae. These wooded areas declined about 5000-6000 years ago, probably as a result of decreased precipitation and reduced monsoon activity and, later, as a result of increased human activity (La Duo 2008).

Ulrike Herzschuh (Marie Curie Fellow in the EECRG, now at the Alfred Wegener Institute for Polar and Marine Research, Potsdam) and John Birks compiled a modern pollen-climate calibration set from 112 lakes in the northern and eastern parts of the Plateau (Herzschuh et al. 2010a, 2010b). This calibration set has been used to reconstruct mean annual precipitation, mean annual temperature, and moisture-balance from fossil pollen assemblages preserved in lake sediments (Herzschuh et al. 2010a, 2011) and also past leaf-area index from fossil pollen (Herzschuh et al. 2010c). Leaf-area index is a useful summary of land-surface changes.

Working at Qinghai Lake in the NE of the Plateau, Herzschuh and colleagues have found that forest declined at about 6000 years ago as a result of decreasing moisture as reconstructed from stable oxygen-isotopes from ostracods and from two climate model simulations. They concluded that the most parsimonious explanation for the widespread woodland decline on the Plateau was changes in the intensity of the Asian summer monsoon in the mid-Holocene 6000 years ago. Their model results show that climate feedback from a reduced tree cover accentuated increasingly drier conditions.

In a synthesis of pollen data from four lakes on the Plateau, Herzschuh et al. (2010c) show strong regional differences in the timing, magnitude, and rate of vegetation change, reflecting differences in threshold, inertia, and resilience. These results from a 9000 year perspective have important implications for assessing future changes on the Tibetan Plateau in response to global change.

Ulrike Herzschuh, John Birks, Jian Ni (Potsdam), and Jürgen Böhner (Hamburg) have recently (Herzschuh et al. 2011) studied the roles of climate, land-use, and CO2 changes as potential drivers behind the major vegetational shift from alpine steppe rich in Artemisia to Kobresia-dominated meadows in the upper Tibetan Plateau. Using modelling approaches, they propose that the replacement of drought-resistant alpine steppe by mesic Kobresia vegetation can, in part, be interpreted as a response to the increase of CO2 concentrations since 7000 years ago.

The EECRG’s research on the Tibetan Plateau has shown that it is a dynamic landscape with major changes in vegetation, land-cover, and moisture, probably in response to changes in the monsoon system over the last 11000 years.

This research has been funded by the Tibet-Norway University Network (La Duo), and by the EU Marie Curie Programme and German Research Foundation (Ulrike Herzschuh) and is a contribution to the University of Bergen's development research programme.

Herzschuh, U. & Birks, H.J.B. (2010b) Evaluating the indicator value of Tibetan pollen taxa for modern vegetation and climate. Review of Palaeobotany and Palynology 160: 197-208. 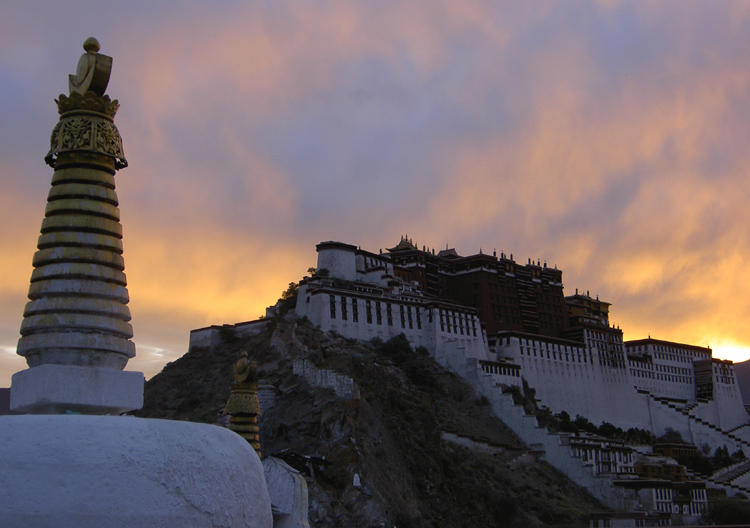