A serious problem in the offing?

The Nile tilapia is an economically important fish catch in Uganda. BIO researcher Ronald Semyalo and colleagues have been undertaking a study of both the water and the fish from two lakes in Uganda.

A native Ugandan, Semyalo first came to Bergen in 2001 as a masters student as part of the Norwegian Research Council project ‘Nature, Society and water’ (Prof Petter Larsson was one of his supervisors). During this project period he visited Bergen to attend a conference and did some lab analysis at the plankton labs in the Realfagsbygget. This was his first contact with Bergen and he liked it so much that he participated in two follow-up projects: one funded under the Norwegian research council’s programme ‘Harmful blue green algal blooms in developing countries- a threat to development and another NORAD funded project ‘Harmful algal blooms in Ugandan lakes’ both coordinated by NIVA in collaboration with Makerere University. Semyalo was a research assistant on the first one and offered a PhD possibility on the second. He applied to take this PhD registered at the University of Bergen because of being able to utilise the better facilities at UiB, especially the possibility of running several experiments at the Plankton Lab. There are no such labs at the University of Makerere.

The two study lakes in Uganda, Lake Mburo and Lake Victoria, used in Semyalo’s research project are eutrophic. As such they are subject to algal blooms (extremely high levels of primary productivity), which results in poor water quality. One of the components of algal blooms can be cyanobacteria, or blue-green algae, which can produce cyanotoxins such as microcystins. These can be very toxic for plants and animals. In particular, in animals they can cause serious and irreversible liver damage.

Semyalo says that what intrigued the researchers most was that the harmful algal blooms occur all year round in productive tropical lakes such as lake Victoria and Lake Mburo unlike in temperate lakes where such blooms are seasonal. Despite this, several fish and zooplankton species continue to thrive in the lakes under bloom conditions. Semyalo and his colleagues wondered how they coped.

Microcystins were found to be present in the water and in the fish tissues but Semyalo says that not much has been done yet to find out how much may actually end up on peoples’ dinner tables. The amounts detected in the water (especially Lake Victoria) and in the fish muscle are not yet cause for concern but he feels that it is probably only a matter of time before this becomes a health problem.

Interestingly the fish seem to have a high tolerance for the toxins. However, the researchers highlight the potential risk of accumulations of toxins in fish tissues that could be transferred up the food chain. Semyalo says that the findings from his PhD research showed that juvenile fish are more vulnerable to the toxic algae than adults are. Adults seem to be able to deal with any ingested toxins through depuration processes for example. However the highest levels of toxins were observed in the gut and it would be risky if the fish were consumed whole as a bird would do, for example, or any other animal eating the fish. This would then lead to bioaccumulation as one moves up the food chain. Although humans are unlikely to eat fish whole, in some communities such as at Lake Mburo the smaller fish were, in fact, cooked and consumed whole.

Semyalo has now completed his PhD. He would like to pursue post-doc opportunities before returning to Uganda to work at Makerere University. Since Uganda is a landlocked country that is covered 18% by water, there are a lot of freshwater resources. Semyalo says that as yet there seems to be little focus on fresh water research from the academia in the country. He would like to generate more interest on issues of freshwater research and believes that a postdoctoral position will provided him with additional exposure to effectively push this agenda forward. 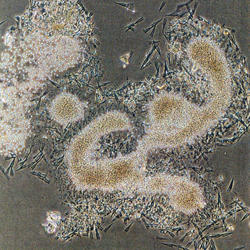