Pollen Chemistry as the Next Generation Tool in Palaeoecological Research - Theory, Methods and Applications

Once trapped in the sediments of lakes or bogs, pollen can remain preserved for thousands, or even millions of years. This year (2016) marks the the 100th anniversary of pollen analysis - when pollen grains buried in bog sediments were first extracted and used to reconstruct past vegetation conditions from thousands of years previously. Although the basic methods have changed very little, pollen analysis has been used to provide a window into past ecosystem conditions across the world. In PollChem, we are taking advantage of an exciting new technique, using the chemistry of pollen grains to develop a range of new ecological applications.

In one half of the project, we will use pollen-grain chemistry to reconstruct past changes in ultraviolet solar radiation (UV). Variations in UV can be an important driver of ecological and evolutionary change, but it remains difficult to accurately measure changes beyond the last 100 years. Recent research has shown that pollen grains get a chemical sun tan in plants exposed to high levels of UV. Amazingly, this chemical sun tan is preserved when buried in lakes and bogs, and so can be used to track UV changes over time.

In PollChem we will be developing methods to investigate changes in this chemical suntan ~255 million years ago. We will be testing a theory that increased volcanic activity reduced the effectiveness of the Earth’s atmosphere to shade plants from UV, causing environmental stress and contributing to the widespread extinction of plants on land. Before that, we will test whether the method works over a shorter time period, comparing changes in UV inferred from pollen against instrumental records from a lake in Germany for the past 50 years.

In the second half of the project we will investigate whether we can use pollen chemistry for species identification. Pollen from different plant species have different chemical compositions, and so pollen chemistry may be a useful tool for distinguishing pollen species that are difficult to separate using traditional methods under a microscope. The major challenge is to test whether the main chemical compounds that are crucial for species variations are consistently preserved in sediments. If successful, this could be an exciting new tool to help identify problematic pollen species in the fossil record. 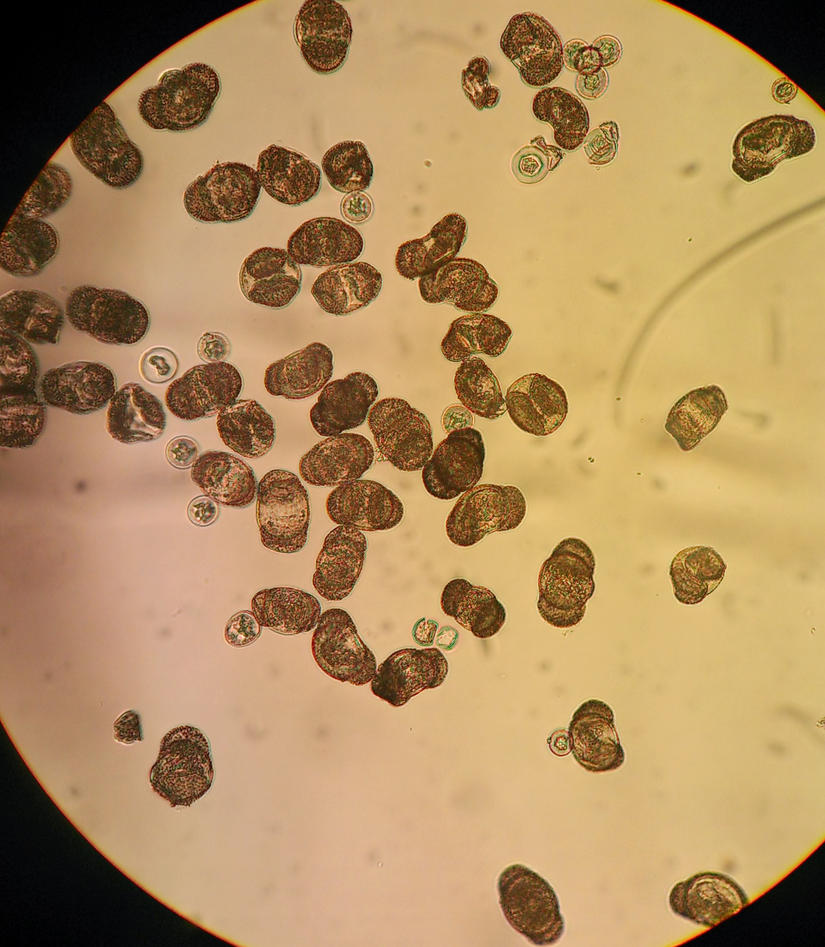 Pollen grains of Pinus sylvestris - how much exposure to UV have they had?
Photo:
Mari Jokerud
21.01.2019