A review of the book will be published in Nature 15 April.

Do Fish Feel Pain? – A question explored in a new book by a University of Bergen scientist.

Fish feel pain when caught at the end of a hook or hauled in by a trawler, according to biologists who have found pain receptors in these animals.

"There has been a long-standing debate on whether fish have the ability to feel and react to pain," said Victoria Braithwaite, Professor of Fisheries and Biology at Penn State University and Professor II at the University of Bergen. "We have shown that fish not only feel pain, but they change their behaviour to avoid the sensation."

While experimenting on trout, Braithwaite and her colleagues chanced upon pain receptors and fibers similar to those in other animals. Using a range of experiments they confirmed that fish are aware of the pain they experience.

"Our research has attracted considerable attention, but over time anecdotes have become muddled with the facts. To address the misunderstandings, I decided to write a book that would give a balanced over view of the fish pain debate and that would make the science more accessible. "

Braithwaite notes that while catching fish using hooks hurts the fish, anglers are increasingly using fish-friendly techniques in their sport. The focus, she adds, is on offshore aquaculture and big trawlers that haul in fish by the hundreds of tons. Fish at the bottom of such hauls are crushed alive.

According to Braithwaite, if the commercial fishing industry were to parcel their catch in smaller hauls, it would improve flesh quality while improving the welfare of fish, ultimately leading to better profits.

"Research has shown that animals that are well cared for have better health, and lower incidence of disease," said Braithwaite. "If the fish are handled with care, they grow well remain healthy and this translates into higher profits. It is a win-win situation for everybody".

Braithwaite outlines the research and ideas in her new book: "Do Fish Feel Pain?" published by Oxford University Press. 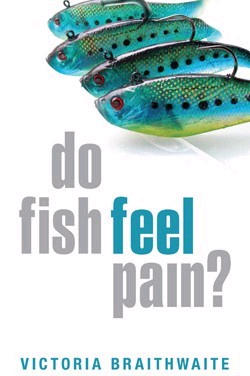