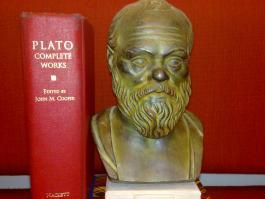 The aim of the group is to promote research in ancient philosophy.

The ancient philosophy group wishes to be joined by master's students, PhD candidates, teaching assistants and members of the academic staff who intend to work on the period from Thales to Augustine. The group as such has no special preferences concerning philosophical approaches.

The Bergen Ancient Philosophy Group is an active research group at the University of Bergen's Department of Philosophy. The group holds regular reading groups and seminar sessions, as well as arranging conferences and similar events.

The 2018 conference, “Democracy and its Rivals: Political Thinking in and around Plato” (24-25 May), focuses on the Statesman and Laws.  The group’s previous conference was "Paideia, Power, and Persuasion" (2017).

The Department of Philosophy also houses DICTUM , an EU funded project on Plato’s dialectic, carried out in cooperation with the Bergen Ancient Philosophy Group.

The group is headed by Professor Hallvard Fossheim.

Back to overview of departmental research groups