Parkinson’s disease (PD) is a neurodegenerative disorder characterized by progressive death of dopaminergic cells in the substantia nigra of the brain and a decline in dopaminergic phenotypic markers, notably the enzyme tyrosine hydroxylase (TH) [1]. TH catalyzes the conversion of L-tyrosine to L-dopa, which is then converted by dopa decarboxylase (DDC) to dopamine, which acts as the precursor for the other catecholamine neurotransmitters. Its reduction leads to the movement and cognition impairment typical of PD, but TH is also reduced in manic depressive illness, schizophrenia or L-dopa-responsive dystonia (DRD). DRD is caused by mutations in enzymes involved in the synthesis of the TH-cofactor tetrahydrobiopterin (BH4), or by mutations in the TH gene itself, associated to the neuropsychiatric recessive disorder TH deficiency (THD), which manifests as DRD, parkinsonism in infancy or progressive encephalopathy [2].

Traditionally, PD, DRD, and THD have been treated with L-dopa supplementation, which has secondary effects and low long-term effectiveness, since patients develop L-DOPA induced dyskinesia or intolerance [1]. TH is an important target for experimental gene- and cell-therapy approaches but an effective cure for these diseases has not yet been found. Therefore, new therapeutical options are necessary and they must be based on the understanding of TH’s pathological state through the knowledge gained on TH’s function and regulation in healthy situations.

The present project aims at gaining insights into the regulation of TH with focus on the effect of phosphorylation and of TH binding to partner proteins and membranes. Phosphorylation of TH is a complex and unknown regulatory mechanism which affects four different residues that are substrate for specific protein kinases, i.e. threonine 8, and serine residues 19, 31 and 40 [3]. Phosphorylation of Ser40 is carried out mainly by PKA and is the most clearly understood since activates TH and it releases the feed-back inhibition caused by the enzyme end-products (dopamine and the other catecholamines) [4-6]. PRAK and CaMKII kinases are in charge of the phosphorylation of Ser19 [4] which does not in itself activate TH but is determinant for the formation of a complex with regulatory 14-3-3 protein family members and it also reduces the affinity of TH for direct interaction with membranes [5, 6]. However, little is known on the functional effect of these interactions. Thr8 and, to a lesser extent, Ser31, are still enigmatic phosphorylation sites although in both cases ERK 1 and 2 are the responsible kinases [4, 7]. Thus, understanding the physiological implications of each site in the regulation of TH is crucial, and therefore our first goal has been to characterize in detail the cellular localization of each phosphorylated form and how these distributions correlate with the distribution of TH with membranes and partner proteins (such as monoamine vesicle transporters, DDC, 14-3-3 proteins, etc.).

To this end we analyzed by confocal microscopy the co-distribution of each phosphorylated form and the different partner proteins in neuroendocrine and neuroblastoma cell line cultures as well as commercial IPS human dopaminergic neurons. We have identified specific and clear differences in the subcellular localization of each TH species, and we are at present finishing the characterization of the phosphorylation-specific localization using different approaches to identify the organelles involved, such as marker dyes, drugs or marker protein among others.

As part of our interest to understand the regulation of TH, we have analyzed the complex formation between TH and 14-3-3. In particular, we have studied the stoichiometry of the complex formed by the incubation of 14-3-3g (14-3-3 isoform gamma) with THpSer19 or THpSer19pSer40 (TH phosphorylated on serine 19 or on both Ser19 and Ser40) using native gel electrophoresis followed by Western blot, native mass spectroscopy and native staining electron microscopy. Our results indicate that pSer19 residues in the TH tetramer contribute differently in the association to 14-3-3g, yet complex formation between TH-pSer40 and 14-3-3g is non-detectable or very weak. We also found that 14-3-3g inhibited the phosphorylation rate of TH-pSer19 by PKA on Ser40 which has reduced accessibility in the TH:14-3-3g. In addition, we have analyzed by biophysical approaches effect of TH on synthetic membranes validating the results in cell cultere experiments using cell-substrate impedance and flow cytometry.

We anticipate that our results will contribute to the comprehension of TH and dopamine synthesis regulation through interaction with specific partners as the 14-3-3 protein family. This knowledge could be crucial to advance in the understanding of diseases such as THD or DRD, caused by TH dysfunction, but could also enlighten part of the pathomechanisms involved in neurodegenerative diseases such as PD, which in turn would be of relevant for the devising of new therapeutical options. 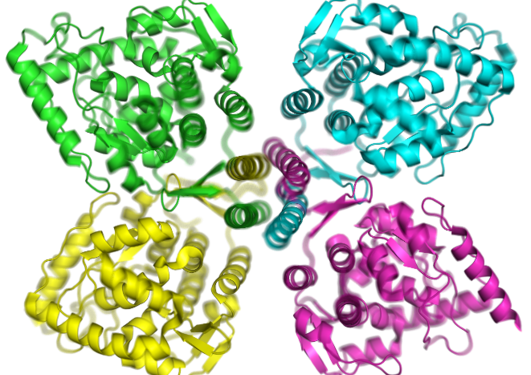 Tyrosine hydroxylase (TH) is a tetrahydrobiopterin (BH4) dependent enzyme that catalyzes the rate limiting step in the synthesis of catecholamine neurotransmitters and hormones and is a marker for dopaminergic neurons. The research interests of our group include investigation of structural...