Borgund is known from saga literature, and in the 1300s the place was referred to as one of ‘the small towns’ (Smaa kaupstader) in Norway. In the Middle Ages Borgund was known as a large Church parish. But after the 1500s the written sources grow silent about the small town. It gets abandoned and forgotten.

Among written sources from the Middle Ages it is, apart from charters, the sagas that mention Borgund most frequently. According to the sagas, Borgund was a place Håkon Jarl and his sons visited before the battle against the Jomsvikings in 985. However, historians are reluctant to consider Borgund being mentioned in the sagas as evidence that the place existed as early as the 900s. The reference to Borgund in connection with events after the Battle of Bokn in 1027, then, is considered the oldest written evidence for the existence of Borgund.

Borgund is mentioned in 1384 as one of ‘the small towns’ (“smaa kaupstader”). Based on written medieval sources, the existence of three, or maybe four, churches can be reconstructed for the settlement. In addition, Borgund was a well-known thing site in the Late Middle Ages, a role it had probably played already in the late Iron Age. Borgund is mentioned for the last time in written sources in the year 1570.

Although the medieval written evidence for Borgund was known in the 1800s and early 1900s, there were no visible traces on the ground that would inform the local residents of Borgund parish about the history of their home. Based on the written sources, therefore, historian Peder Fylling referred to Borgund in 1847 as "a Past Stage for Strange Events" ("en Fortids Skueplads for mærkværdige Begivenheder").

The original location of the settlement of Borgund was thus gradually forgotten. But during renovation work in March 1912, the tenant at Borgund parsonage came down on the remains of an old wall. The discovery was brought to the attention of the Cultural Heritage Society in Bergen, which asked architect Gerhard Fischer to travel to Borgund and investigate what they thought was an old church ruin. This was the beginning of Fisher's career as a ‘digging architect’, with an interest in churches and monumental buildings. Fischer's excavation of the foundation of "St Mary's Cemetery at Klokkersundet" — which we know today as the ruins of St. Margaret’s Church — became the first archaeological excavation at Borgund. At the time, medieval archaeology was largely synonymous with the exploration of monumental buildings, and accordingly, Borgund was primarily regarded as an important medieval church site.

During the first decades of the 20th century several small finds appeared from the earth at the vicarage field (‘Prestegårdsjordet’). The artefacts were repeatedly reported to the Bergen Museum, often being referred to as finds of "urban character". However it was not till late in the autumn of 1940 Per Fett, archaeologist at the Bergen Museum (today the University Museum of Bergen), travelled to Borgund to investigate and document findings of some "things of urban character" and of wooden logs "which indicated that there were houses". These discoveries emerged during the trenching of the Prestegårdsjorde. Due to bad weather conditions, Fett could only document what was already found during the ditch work. After Fett's visit, the ditches were quickly covered up, and we do not know exactly where these were located.

In 1953, it was decided to use part of the Prestegårdsjorde to expand the standing church’s cemetery in Borgund. In connection with this work, Cato Enger from the Directorate of Cultural Heritage was sent to Borgund to investigate the area. A large amount of archaeological material was found. Bernt Lange from the Directorate of Cultural Heritage took over the work from Cato Enger in 1953 and continued the investigations until June 1954. Gradually, the extent of what was buried under the Prestegårdsjorde became clear. From July 1954, the Historical Museum (today University Museum of Bergen) archaeologist Asbjørn E. Herteig became the academic head of the archaeological investigations in Borgund.

The excavations from 1953 were administratively subject to the Directorate of Cultural Heritage, but Asbjørn E. Herteig from the Museum of Cultural History, today’s University Museum of Bergen had the overall academic responsibility from 1954 to the late 1980s when he retired. All in all, 5300 m2 have been excavated at Borgund and 45,000 archaeological artefacts, as well as an equally large amount of osteological material have been found. This represents the largest corpus of medieval archaeological material in Norway outside the big towns. Some of this source material is on display today in the Medieval Museum at Sunnmøre Museum in Ålesund, while the rest is being held at the University Museum in Bergen. This material lays the foundation for the Borgund Kaupang Project which is now underway. 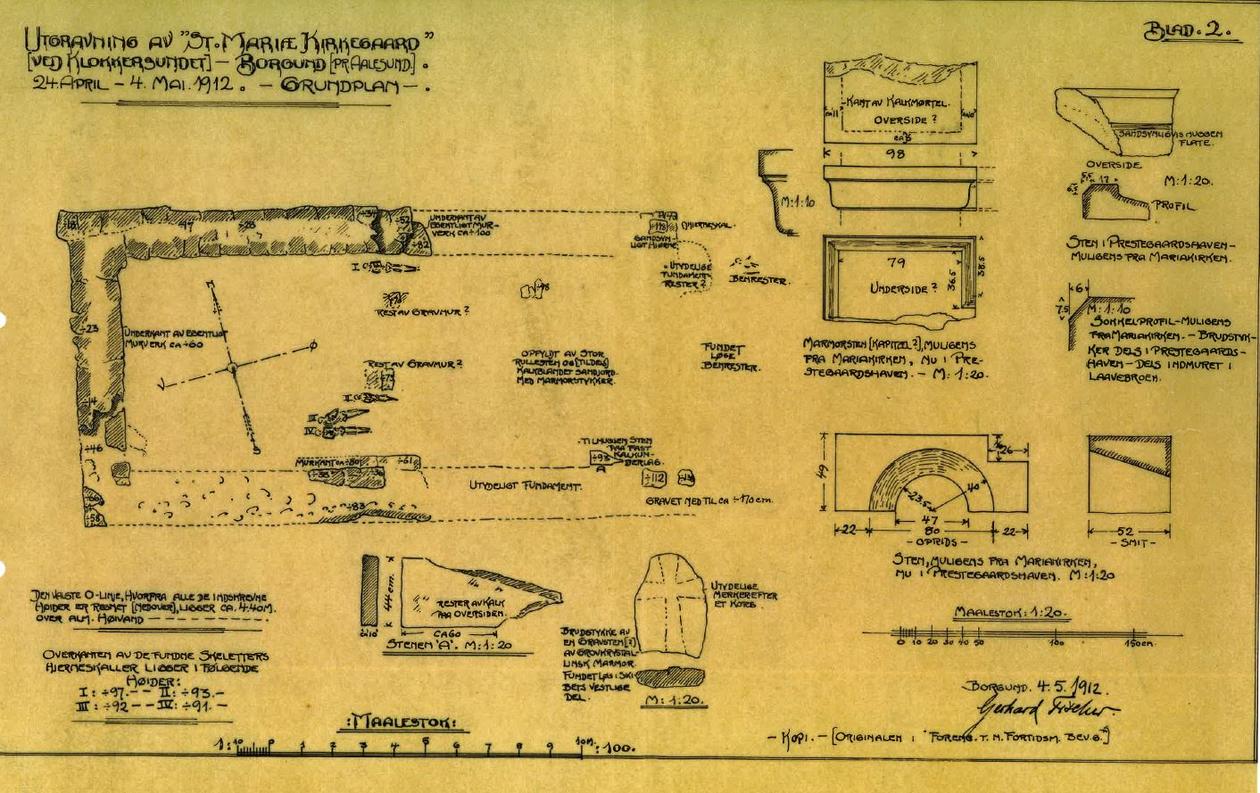 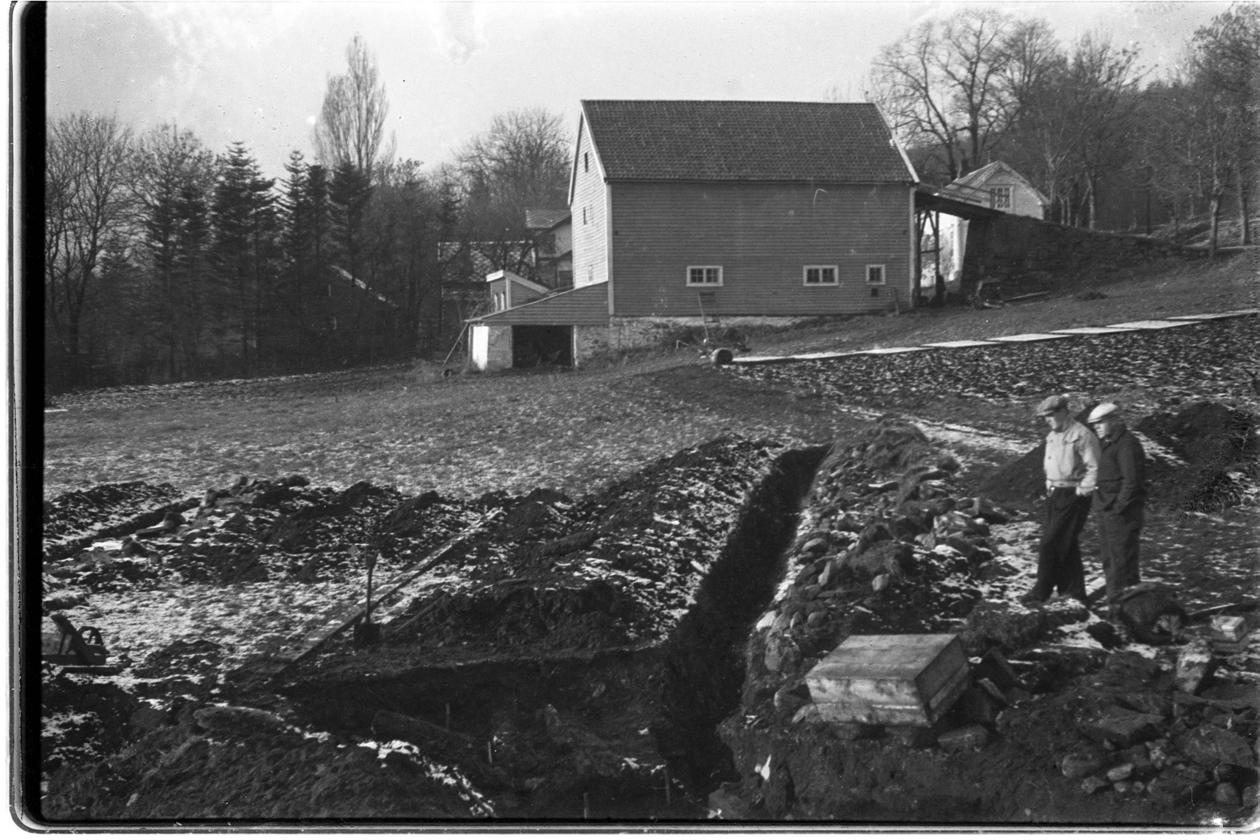 From Per Fett's archaeological excavation in Borgund, 1940
Photo:
Per Fett © 2019 Universitetsmuseet i Bergen CC BY-NC-ND 4.0 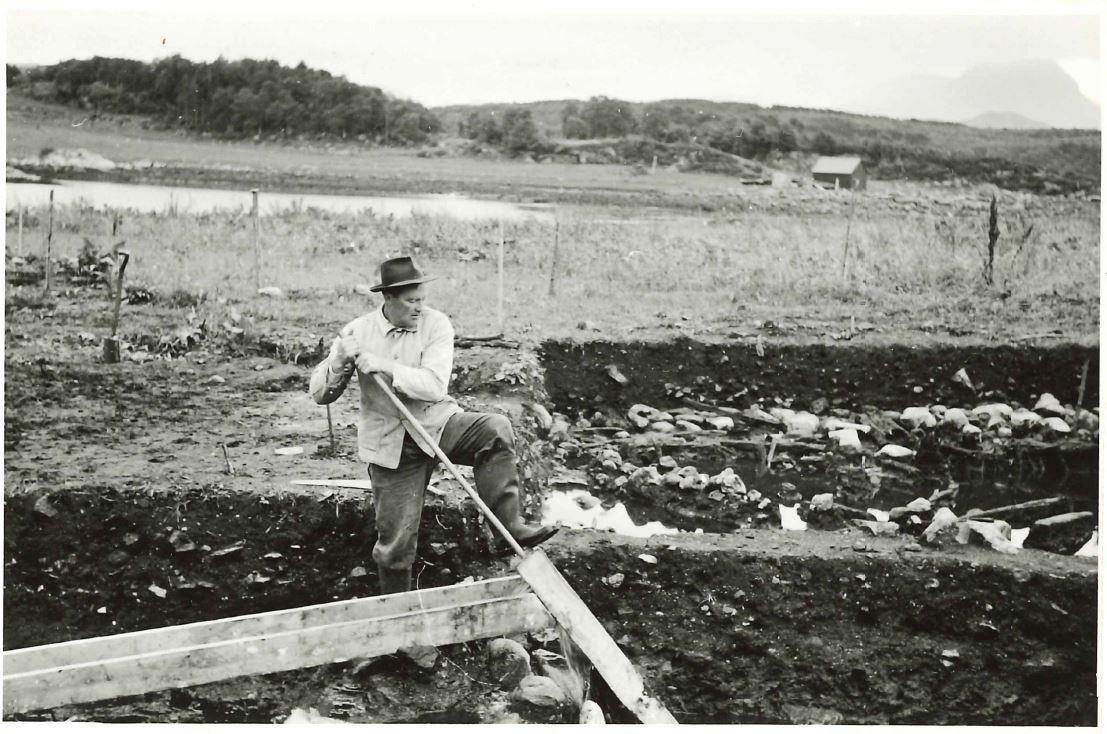 Asbjørn Herteig takes over as the academic head of the archaeological investigations in Borgund
Photo:
Asbjørn Herteig © 2019 Universitetsmuseet i Bergen / CC BY-SA 4.0 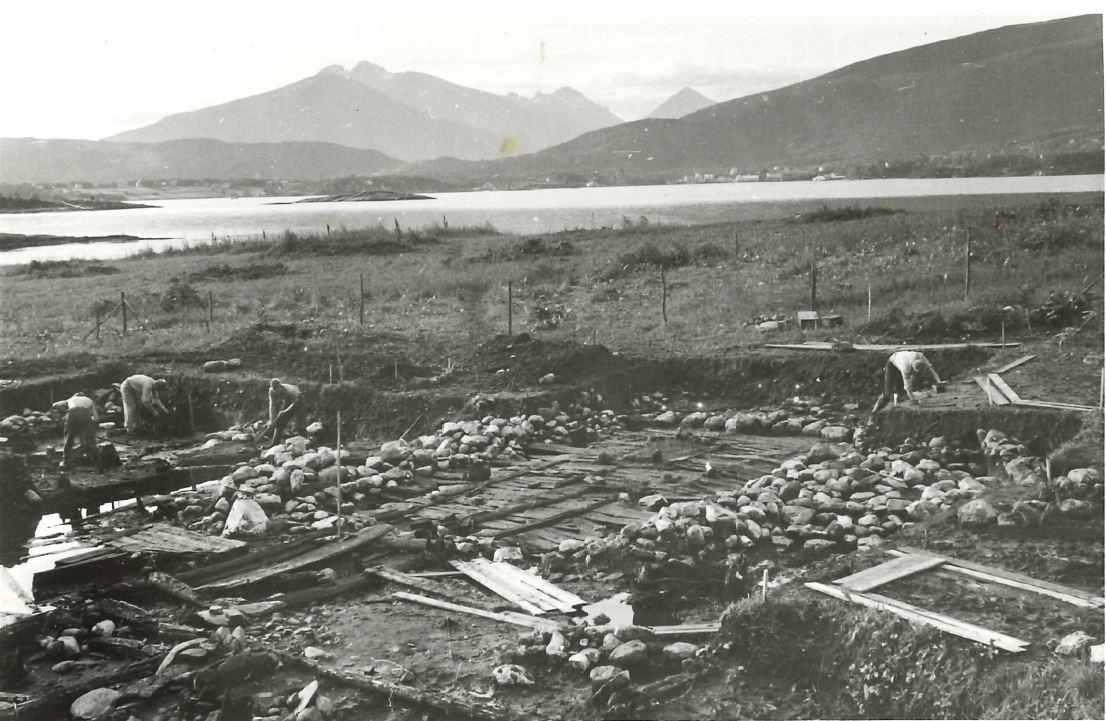 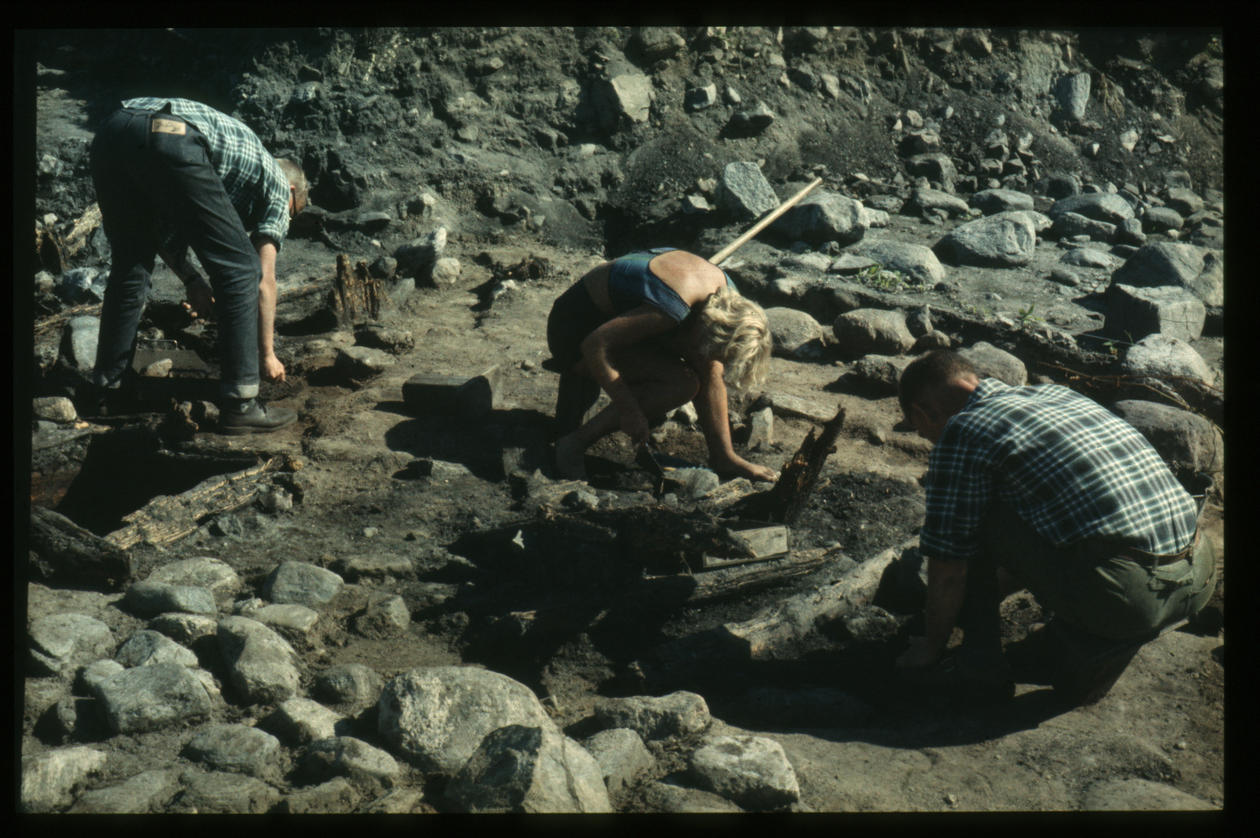