Why I found working with Gyrodactylus rewarding

It took longer than expected for our Gyrodactylus to feel at home in our lab. But once the stock “had warmed its feet” I have been grown more and more appreciative about them. Here are some of the reasons why.

Next
Close-up of a Gyrodactylus.
Photo:
Egil Karlsbakk
1/2
Gyrodactylus attached to fin of a guppy.
Photo:
Vitalija Bartusevičiūtė
2/2
Previous

More than what we know. Gyrodactylus von Nordmann, 1832 is one of the most species-rich genera of the lower Monogenea. By now, more than 400 species of Gyrodactylus have been described (Bakke et al., 2002). However, it is estimated that there are around 20 000 species (Bakke et al., 2002). Generally Gyrodactylus is seen as a specialist parasite, and it is hard to find a species without Gyrodactylus. However, some studies have showed that they are not such strict specialists as thought before (King & Cable, 2007). Guppies are known to have a few species, but Gyrodactylus bullatarudis and Gyrodactylus turnbulli are the most common. It is even for the specialists difficult to determine the exact species, therefore oftentimes one is relying on where the parasite is located – Gyrodactylus turnbulli prefers hanging out on the fins of the host, while Gyrodactylus bullatarudis would more often choose gills (Harris & Lyles, 1992).

Unique reproduction. They have a crazy reproduction system – daughters burst out of their mothers and latch on the same fish and are already pregnant with 3rd generation, therefore are known as “Russian-doll killers” (Bakke et al., 2007; Cable & Harris, 2002). More specifically, they give birth to fully grown young which already contain developing embryos in utero (Bakke et al., 2007). Gyrodactylus offspring are born at 2–2.5 days intervals (Scott, 1982). Therefore, this crazy reproduction system alows them to grow almost exponentially at the beginning of the infection. Because of the reproductive system, they were very popular in studying chromosome and embryonic cell behaviour from 1860s to the First World War (Bakke et al., 2007) and are still widely studied till now.

Practicality - Easy to take care. Once established to the lab, as long as the hosts are happy the parasites are happy. They have been very easy to take care till now. It takes no additional routines in the lab to take care of it, except feed them in the tanks and clean out the tanks. One of the main things why we chose to study them – they allow studying parasite infection without needing to rely on additional cues. Gyrodactylus grow on fish skin (and gills), which makes it possible to count numbers of parasites without actually killing the fish. Thus, it is possible to quantify the infection multiple times. In many other systems one has to use proxies to estimate the parasite load over time.

Amazing scientific community. Nonetheless, for me, the people with whom one works are just as important as the work itself. From the very beginning when I started working with the parasite – as we never had Gyrodactylus in our lab before – I contacted the experts in the field to ask for help. I felt included in the community from the very first minute, and honoured in that some people find time even for personal one-on-one calls to talk about how to pursue my study when things are not working, discussing things from introduction of parasite to the lab to study design.

Even though it was my first encounter with the parasite in the working environment, I found it very rewarding working with this parasite. A sneak-peak – I found significant differences in the resistance between size-selectively harvested guppy lines. Hope you get to read about it soon, as I am working on my first manuscript right now. 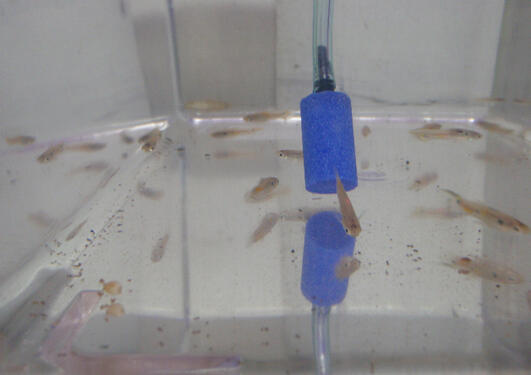