Norwegian Seismic Network Introduction In order to monitor the seismicity in Norway and the adjacent offshore areas, a network of digital seismic stations have been operative on mainland Norway since the beginning of 1980's. Prior to this, a number of single-stations and networks were installed in different parts of Norway. The first seismograph station in Norway, equipped with two horizontal Bosch-Omori pendulums, was deployed in Bergen in 1905, which was later replaced by a Wiechert seismograph in 1921. Later in the 1950's and 1960's several stations were operative, including the first array station in Lillehamar (1963-1969). The Department of Earth Science, University of Bergen (UiB), is responsible for the operation of a network of more than 25 stations installed on mainland Norway, the arctic islands, Jan Mayen, Bjørnøya and Svalbard. The network covers a large geographical area, with the largest distance between the most remote stations in Svalbard and southern Norway, of approximately 2200 km. In addition, NORSAR contributes data from the three array stations in eastern Norway (NORESS), northern Norway (ARCESS) and Svalbard (SVAESS) as well as a station on Jan Mayen. Data from the network are regularly being processed and archived in a database which provides the basis for further analyses within the different research fields of seismology. Monthly seismic bulletins are produced and distributed both nationally and internationally. There is also a regular data exchange with the neighbouring countries as well as other international agencies. In connection with the network operation, a complete digital data acquisition system, SEISLOG, (Utheim et al, 2001) and processing system, SEISAN (Havskov and Ottemøller, 2000 ) system have been developed in recent years. Based on the experience in the observatory practice, the seismo-group at the Department of Earth Science, is involved in a number of international projects, basically related to the establishement of seismic networks, data collection, processing and training of personnel. At present, the group has cooperation with a large number of institutions (more than 33), in different countries and the SEISLOG/SEISAN systems are now being used in 50 countries in different parts of the world. Station configurations and Data acquisition The backbone of the Norwegian Seismic Network are the nine stations equipped by a similar three- component short-period seismometers, digitizers (24-bit Earth Data or Nanometrics), and a SEISLOG data acquisition system. Precision timing is acquired by GPS clocks. Data transfer to the central station is done by ftp and telnet. At three of the stations three-component force-balanced accelerometers are installed in addition to the short-period seismometers (SUE, MOL and LOF). Five of the stations, (KONO, NSS, TRO, BJO, KBS), contain broad-band sensors designed to detect tele-seismic events. The stations KONO and KBS are part of the global IRIS network, which allows for online communication with international agencies. The three-station network around Bergen (ASK,BER and ESG), is designed for continuous recordings through a 24- hours open data line, where the station in Bergen. The other three-station network in the arctic island Jan Mayen, operates separately to monitor the volcanic activity. Further processing using SEISAN is performed regularly for different research tasks. The Norwegian Seismic Network has the following main functions: * General monitoring of seismicity in Norway and adjacent areas, with a capacity of providing rapid information to the society. * Collection of earthquake data to be used in national seismic design codes and earthquake maps for mainland and offshore areas. * Compilation of earthquake catalogues to be used in seismic hazard analyses for offshore constructions, hydropower stations, dams, tunnels and other critical industrial installations. Support Seismic stations in Norway are supported by different organizations. NNSN operational costs are covered by the Faculty of mathematics and Natural Sciences and Oljeindustriens Lands Forening. 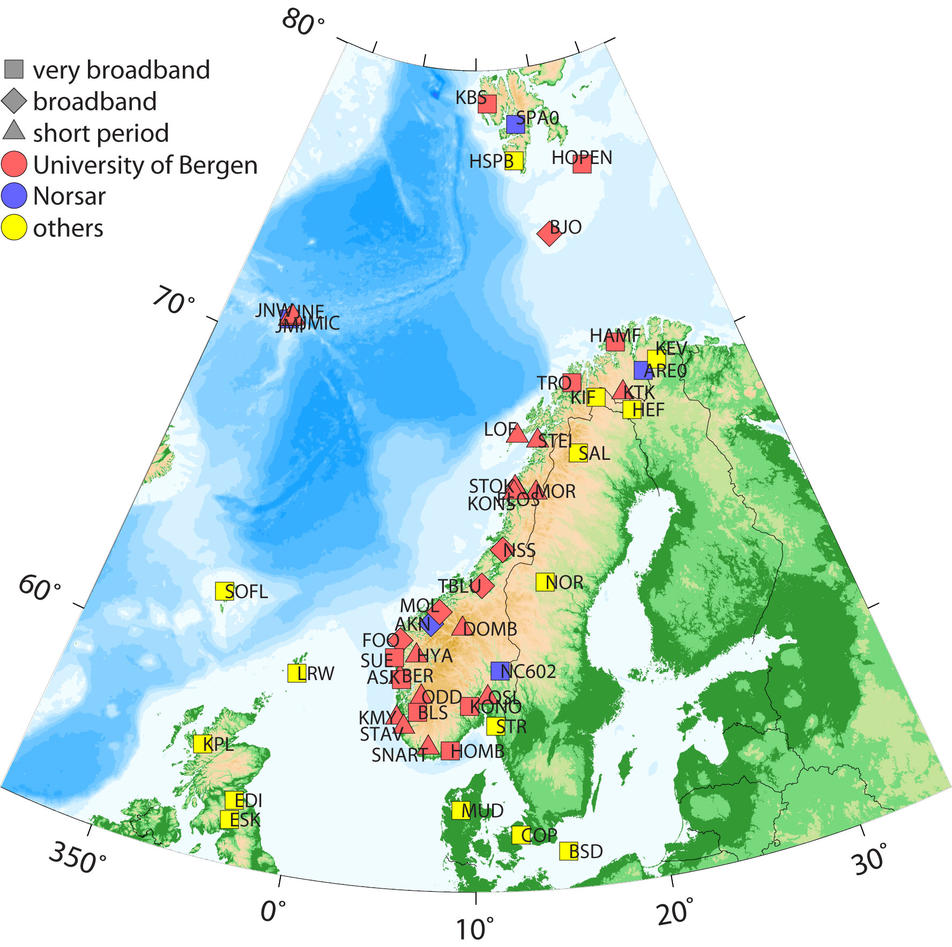