One important property we study when combing petrology and geodynamics is density. Density is a first order controlling parameter on vertical motions of the lithosphere. The density of a rock varies non‐linearly as a response to changes in pressure, temperature and bulk composition because it is governed by complex mineral reactions. One example is the stretching of the lithosphere and the formation of a basin on the surface. The mantle part of the lithosphere becomes lighter during this process due to upwelling and heating, but this buoyancy force is compensated by the thinning of even lighter continental crust. Under certain circumstances, however, reactions in the mantle can reduce density even more and the subsidence of the basin in slowed down or even reversed. Reactions or phase transitions in the crust cause even larger density variations than those in the mantle and may significantly influence lithosphere dynamics, in particular in regions with thick crust or in subduction zones. The ultimate aim of petrological geodynamics is to couple chemical, thermal and mechanical processes in a thermodynamically consistent way. Then we can study the feedback between the different processes and gain new insight into complex Earth dynamics. 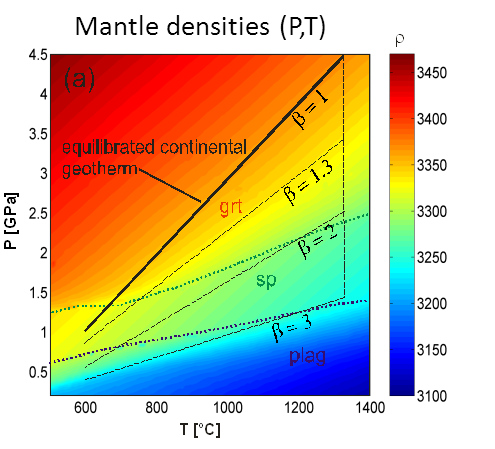