The last ten years has seen an explosive development in the potentially revolutionary field of nano-scale sciences and technologies (NST). While advances in NST have been accompanied by a considerable amount of research into social, ethical and legal aspects, research-based knowledge of cultural dimensions remains marginal. This project is a contribution to filling this knowledge gap, and is a collaborative research project in which the relationship between science, media and art is explored through the case study of visualising the nano-scale. The nano-scale (1 nanometer = 1 billionth of a meter) represents the scale of atoms and small molecules and therefore falls well beyond normal sensory perception. However, an ever-increasing range of images of the nano world is emerging, in the field of nanoscience, in public media, and in the nascent field of nanoart. The process of rendering the nano-scale perceptible to our senses is being performed and informed by different forms of knowledge, which span C.P Snow's "two cultures" of the sciences and the humanities. However, due to the inaccessibility of this scale to direct sensory perception, all imaging done in the field involves creative imagining to a high degree. In this project we employ the term "imag(in)ing" to capture what we see as the dual nature of this process. The research project focuses on practices of imag(in)ing the nanoscale and investigates three key, interrelated, questions: 1. How is the nano-scale being made visible across the visual arts, the public media, and the sciences? 2. What becomes invisible (or backgrounded) in particular imag(in)ings of the nano-scale? and 3. How are different imag(in)ings of the nano-scale assigned value across communities of art, media, and science, both on their own and in interaction?

The project has resulted in 8 publications in a special issue of Nanoethics: "Imag(in)ing the Nano-scale" (August 2011), edited by Kamilla Kjølberg, Rasmus T. Slaattelid, and Fern Wickson. 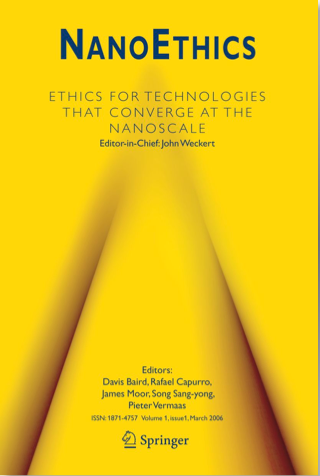