Passion and Profession - Viking at Heart

- It all started when I was a child and first read Thorgal, a graphic novel series which is extremely popular in Poland, France, and Belgium. The story is set in the Viking Age and revolves around a young man, portraying his life and adventures. The series mixes historical and archaeological facts with fiction (and even science-fiction) but I was instantly enchanted by the stories and the beautiful images - says Leszek Gardeła, guest researcher and DAAD P.R.I.M.E Fellow at the Department of Archaeology, History, Cultural Studies and Religion at the University of Bergen (UiB).

- When I grew a bit older, I started reading the Eddas and sagas, and took every opportunity to visit museums with Viking Age finds. I guess growing up in Poland, far away from Scandinavia, the idea of the North, with its majestic mountains, fierce seas and brave warriors, was something that really fueled my imagination.

So for Leszek Gardeła becoming a Viking archaeologist was just the logical consequence of his childhood dreams and passion for the North. After his MA studies in Poznań and Oslo, Gardeƚa pursued a PhD in Archaeology at the University of Aberdeen, focusing on atypical funerary practices in the Viking Age.

In 2014 - 2017 Gardeła conducted a three year postdoctoral project on similar mortuary phenomena among the Slavs, but it is the Viking Age Scandinavians who keep fascinating him the most. Now, he is back in Norway for his new project on Amazons of the North - Armed Females in Viking Age Archaeology and Old Norse Literature.

- The idea of this project is not so much to find proof that there were female warriors in the Viking Age but to better understand why and in what circumstances women would have used weapons. I want to find out what weapons in female hands meant both in the human world and in supernatural contexts - explains the Viking expert.

Funded by the German Academic Exchange Service (DAAD), Gardeła will spent twelve months at the UiB, where he will examine archaeological material from Viking Age female graves in Norway.

- My work at the University Museum of Bergen has already made me much more aware of various methodological problems surrounding archaeological finds from Norway, such as the circumstances of their discovery and how funerary assemblages are typically sexed. In many cases the sexing of Viking Age graves is just pure guesswork. Due to the natural conditions in Norway, bones rarely survive, so the graves are sexed on very traditional premises where biological sex is determined on the basis of objects only - admits the researcher.

- In this light, graves with jewellery have typically been ascribed to women and graves with weapons to men. This is not always correct. Working with archaeological material from other places in the Viking world, I have come across graves which include well-preserved skeletal remains and which do not fit this strict pattern of sexing funerary assemblages.

In an attempt to learn more about women and weapons in the Viking Age, Gardeła bases his research not only on archaeological material but includes texts and iconography as well.

- I use a lot of textual sources, especially the Old Norse sagas and eddic poems, to better understand the archaeological finds I study. Most of these sources are younger than the Viking Age, so it is vital to approach them in a critical way. However, I do believe it is possible to combine archaeology and texts to get a more nuanced image of the Viking Age.

While working on his projects, Leszek Gardeła can often be found in museum archives - and less frequently in the excavation trench.

- I believe that over the years so much material has been excavated that before we dig up more, we should take care of what is already available. What Viking studies lack are detailed and up-to-date syntheses of the material evidence. It is high time to look at the old finds again, compare them with what we have found over the last fifty years and come up with new visions of the period.

But the museum-based work does not make archaeology an office job for Gardeła, who is constantly striving to weave a comprehensive picture of the Viking period.

- I never write about things I have not seen with my own eyes. I always make the effort to experience the finds first hand. And I also like to travel to the place of the artefacts’ discovery, to explore the landscape and even talk to the locals to learn some folklore. All this is very important to me - stresses the archaeologist.

Leszek Gardeła is currently working on his fourth monograph, provisionally entitled “Amazons of the North: Women and Weapons in the Viking Age”. Although academic work remains in the centre of his attention, he would like to pursue projects that involve more engagement with non-professional audience, too.

- In addition to my scholarly work, I would like to use my archaeological expertise to disseminate knowledge about the past through film, television or even books for teenagers.

- At the moment, I am producing a lot of social media content related to my Amazons of the North project. In doing so, I try to be careful to not over-simplify a complicated academic topic. Nonetheless, I believe that the different social media platforms available to us today provide exciting opportunities to present archaeological material in a modern and engaging way.

- My research focuses on the Viking Age, broadly understood, but I am particularly interested in mortuary practices, ritual objects, and magic in the past. In my work, I often combine archaeological and textual sources, and I draw inspiration from anthropology and history of religions.

- I also have a keen interest in Slavic archaeology, in particular in aspects of identity, elite culture, and interactions between Slavs and Scandinavians around the Baltic Sea.

Archaeology is important because…
It helps us better understand where we come from and where we are going.

If I hadn’t become an archaeologist I’d probably be…
A filmmaker. I love movies and have a private collection of several hundred DVDs at home (yes, I am oldschool). When I was a teenager, I even wrote my own scripts, hoping to turn them into real movies one day. In the end, my deep love of archaeology took over, though.

A place I want to see and explore soon…
Svalbard! I love travelling and I am fascinated by the North. The farther north the better! 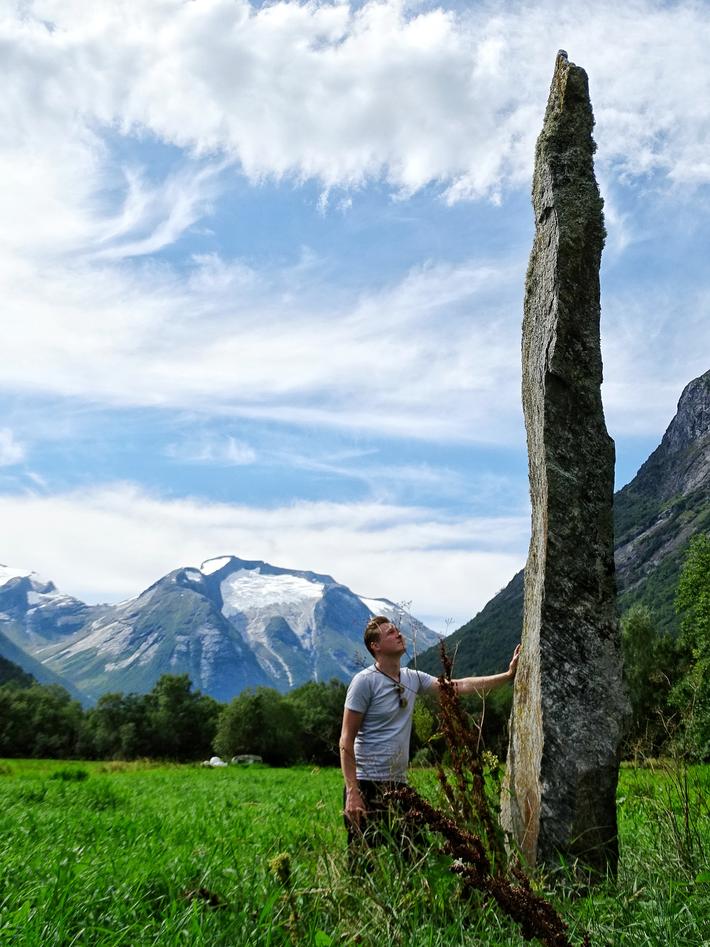