Shear-dilation-based hydraulic stimulations are conducted to create enhanced geothermal systems (EGS) from low permeable geothermal reservoirs, which are initially not amenable to energy production. Reservoir stimulations are done by injecting low-pressurized fluid into the naturally fractured formations. The injection aims to activate critically stressed fractures by decreasing frictional strength and ultimately cause a shear failure. The shear failure leads to a permanent permeability enhancement of the fractures, which contributes to the overall reservoir permeability, owing to the damage in fracture surface characteristics during the shear failure. Shear stimulation is considered a key for geothermal energy development; however, seismicity is a critical by-product, which has to be controlled. Numerical modeling can provide a deeper understanding on governing mechanisms, which is essential for reservoir assessments and the control of seismicity. The primary goal of this thesis is to aid further development of EGS by contributing to the current state-of-the-art for numerical modeling of shear-dilation-based hydraulic stimulations.

Numerical modeling of shear-dilation-based hydraulic stimulations requires mathematical modeling of flow and mechanical deformation in fractured formations. The initial focus of the thesis is the modeling of the mechanical deformation of naturally fractured rock. The deformation and stress state of the rock are controlled by the deformation of pre-existing fractures, which is governed by different equations than the deformation of the surrounding formation. A cell-centered finite-volume approach is developed where the fractures are represented as co-dimension one inclusions in the domain. The method is capable of modeling deformation considering open and closed fractures with complex and nonlinear relationships governing the displacements and tractions at the fracture surfaces. The method aims to provide benefits for studies including flow and deformation couplings in a discontinuous rock.

Hydraulic stimulations are essentially coupled hydro-mechanical processes, where the deformation of fractures has an impact on the permeability as well as on the stress state of the rock. We develop a computational model, which has the capability to capture these interrelations in two- or three-dimensional domains. Considering the significance of the pre-existing fractures, we model the reservoir as a network of explicitly represented large-scale fractures immersed in a permeable rock matrix. The model can forecast the permeability evolution of geothermal reservoirs with complex fracture networks. 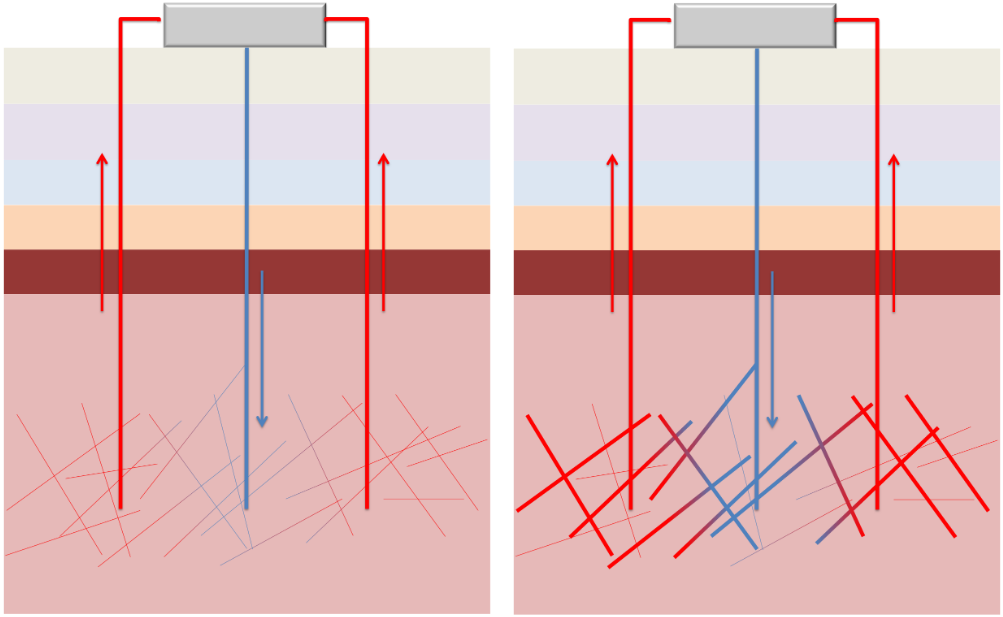