In this thesis, we consider a specific instance of mixed-dimensional partial differential equations (PDEs) commonly referred to as the coupled 1D-3D flow model. The model itself consists of the Poisson equation defined on two different domains, the first being three-dimensional (3D) and the second being a one-dimensional (1D) subdomain of the first. The two equations are coupled by the use of an averaging operator and a generalized Dirac line source. Physically, the coupled 1D-3D flow model can be used to describe fluid flow in a 3D porous domain embedded with cylindrical channels of radius R. This radius is further assumed negligible compared to the size of the 3D domain. We consider herein two main applications of this model, namely (i) water flow between a well and a reservoir and (ii) blood flow through vascularized tissue. From a computational perspective, these applications are highly challenging to simulate due to the scale disparity between the flow domains. A reservoir, for example, might extend several kilometres in the horizontal plane. Reservoir flow simulations therefore use meshes on the order of tens or hundreds of meters. The well, having a radius of only ~10 cm, will therefore not be resolved in the reservoir mesh. Instead, the well is represented in the reservoir equations as a generalized Dirac line source. Critically, the Dirac line source will cause the solution of the reservoir equation to be singular. I.e., the solution diverges to infinity on the line. As we will see, this complicates both the analysis and approximation of the coupled 1D-3D flow problem. To better understand the impact of these solution singularities, we first restrict our attention to the Poisson equation posed in a 3D domain when the right-hand side is a Dirac line source. We refer to this more simply as the line source problem. This problem has previously been studied using its primal formulation; we extend this work to its mixed formulation. The analysis is carried out using weighted Sobolev spaces. These quantify regularity of the solution, and can thus be used to estimate its approximation properties. We consider herein the mixed finite element method, for which our analysis shows that the solution singularities causes the approximation to fail to converge in the standard sense. We then formulate a singularity removal method for the line source problem. The method is based on a solution splitting into higher and lower regularity terms. The lower regularity terms are here given explicitly and capture the solution singularity. The higher regularity term, referred to as the remainder term, is defined as the solution of its own elliptic equation. The right-hand side of this equation belongs to L^2; thus, its analysis and approximation follow from standard elliptic theory. In the singularity removal method, only the remainder term is approximated, and the full solution reconstructed by the solution splitting. This approach is found to enjoy significantly improved approximation properties compared to the straightforward approximation of the full solution. In particular, it is found to retrieve optimal convergence rates for the lowest-order standard and mixed finite element methods. Finally, we consider suitable approximation methods for the coupled 1D-3D flow problem. The line source makes this problem particularly difficult to approximate numerically, as the coupling condition in this model is formulated precisely in the region where the solution degenerates. As the coupling condition also constitutes the driving force of the model, this can further pollute the entire numerical approximation. To deal with this, we return to the solution splitting and decompose the solution into singular and regular terms. Next, via algebraic manipulations, we then reformulate the coupled 1D-3D flow problem so that it posed solely with respect to the high regularity terms. The solution can then be approximated via its higher regularity terms, and the full solution reconstructed by the solution splitting. We refer to this reformulation as a singularity removal method for the coupled 1D-3D flow problem. This method was found to retrieve optimal convergence rates for the lowest-order standard finite element method. Moreover, it was found to make the approximation robust with respect to having a small channel radius R. This makes the method especially attractive for applications where the channel radius is negligible compared to the total size of the simulation domain. 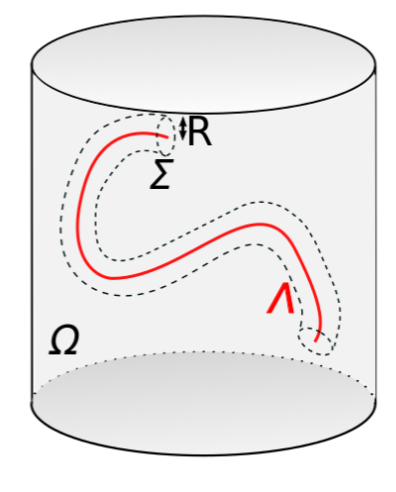