An investigation into the effects of anisotropy and heterogeneity of fracture permeability on flow and thermal transport, 2017

To be able to predict the viability of geothermal reservoirs it is important to know how hydrodynamically stimulating a reservoir will alter the system and how fluids will flow through this reservoir. Making an accurate prediction is difficult due to the natural heterogeneity and complexity of the subsurface. In addition, flow through the deep subsurface is often dominated by fractured media rather than by aquifers. This added layer of complexity combined with the inherent difficulties of gathering data in the deep subsurface result in a research field where numerical simulations are crucial. This thesis focuses on the natural heterogeneity of the system and aims to connect the processes on the fracture scale to results on the reservoir scale. The investigation consists of three sequential parts. Firstly, 2D cases with a single fracture where the effects of fracture wall roughness and shear on the permeability of the fracture are investigated. Secondly, a 3D case with a simple grid to show the effects of fracture with an anisotropic permeability on flow and heat transport. Finally, a 3D simulation to indicate the effects of stress on flow and heat transport through a reservoir. Shear is found to increase the permeability of a fracture, with the largest increase in the direction perpendicular to the shear. Depending on the initial state of the fracture and the length of shear the permeability perpendicular to the direction of shear is up to one order of magnitude larger compared to the permeability parallel to the direction of shear. This difference can determine whether flow occurs predominantly through the fracture or through the semi-permeable rock matrix.

The link to the thesis in the Utrecht University Repository: http://dspace.library.uu.nl/handle/1874/349778
Jesse van der Hoevel wrote his Master's thesis as part of his exchange at UiB. 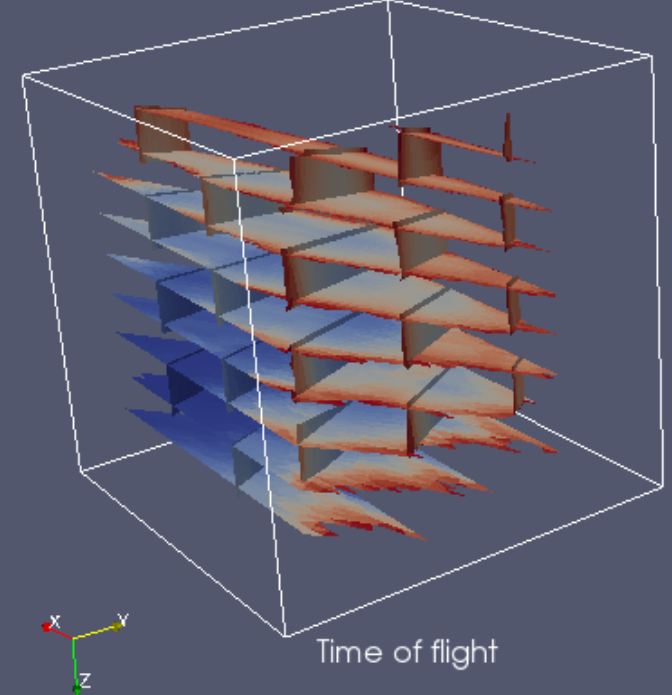 Time of flight of fracture cells for a scenario with confining pressure on the major fractures
Photo:
Jesse van der Hoevel
26.03.2021