In recent years, data assimilation techniques have been applied to an increasingly wider specter of problems. Monte Carlo variants of the Kalman filter, in particular, the ensemble Kalman filter (EnKF), have gained significant popularity. EnKF is used for a wide variety of applications, among them for updating reservoir simulation models. EnKF is a Monte Carlo method, and its reliability depends on the actual size of the sample. In applications, a moderately sized sample (40–100 members) is used for computational convenience. Problems due to the resulting Monte Carlo effects require a more thorough analysis of the EnKF. Earlier we presented a method for the assessment of the error emerging at the EnKF update step (Kovalenko et al., SIAM J Matrix Anal Appl, in press). A particular energy norm of the EnKF error after a single update step was studied. The energy norm used to assess the error is hard to interpret. In this paper, we derive the distribution of the Euclidean norm of the sampling error under the same assumptions as before, namely normality of the forecast distribution and negligibility of the observation error. The distribution depends on the ensemble size, the number and spatial arrangement of the observations, and the prior covariance. The distribution is used to study the error propagation in a single update step on several synthetic examples. The examples illustrate the changes in reliability of the EnKF, when the parameters governing the error distribution vary. 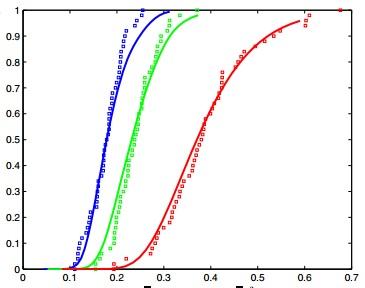