In my project, I want to explore the pianist’s role in Arnold Schönberg’s “Das Buch der hängenden Gärten” (The Book of the Hanging Gardens), Op. 15 in context of other German Lieder from the early 20th century.

In three concerts, I oppose this work with other Lieder by Arnold Schönberg, other Lieder with texts by Stefan George, and Lieder by other composers from the same time. Setting the work in different contexts and focusing on different aspects, I expect to get a better understanding of this repertoire and develop possible strategies for practicing and performing it as a pianist.

Interpreting and communicating the union of words and music in Lieder is one of the most important aspects of a Lied pianist’s work. Through in-depth analysis of the poetry and the music, together with artistic experimentation on the piano, I hope to enhance my ability to communicate this repertoire to an audience. In addition, I want to contribute to new insights on the work’s performance tradition by studying recordings and written sources.

Though the idea of expressing poetry in the accompaniment of Lieder is not new, research and performances concentrate mainly on Lieder from the 19th century, especially those by Schubert, Schumann, Brahms and Wolf. Tremendous developments in the composition of Lieder in the early 20th century make this period especially interesting. Due to new compositional techniques and aesthetics, interpretation models for earlier Lieder might no longer be sufficient.

Schönberg’s Opus 15 was selected for this project as it is the most important song cycle of the time. I hope to contribute to both giving other performers new insights and making this repertoire better known to a larger audience.

Friederike Wildschütz is currently a fellow in the Norwegian Artistic Research Programme. She studied piano with Professor Gerlinde Otto at Hochschule für Musik FRANZ LISZT Weimar, where she obtained a pedagogic and artistic diploma. In addition to studying solo and chamber music repertoire, she has been interested in Lieder since she started Liedbegleitung with Professor Karl-Peter Kammerlander as a subsidiary subject in Weimar in 2005. During her master and postgraduate studies with Professor Erling R. Eriksen at the Department of Music and Dance, University of Stavanger, she studied German, Nordic and Russian Lieder in addition to focusing on solo repertoire from the 19th century. Before her fellowship, she worked as an accompanist for singers and young talents at the University of Stavanger. She has accompanied masterclasses of renowned singers and is a much sought-after chamber music partner. 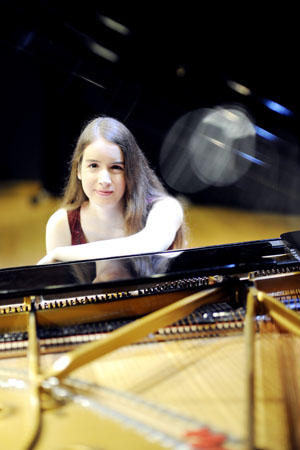