How do cells in the early embryo coordinate their development to create the different tissues of the body? We have found that rapid changes in calcium levels travel from cell to cell in a choreographed wave, and that disrupting this wave leads to abnormal development.

One of the yet unsolved riddles in biology is how cells in the early embryo become organized to generate the different tissues and complex structures of the body. It has been clear for quite some time is that this involves communication among the cells, a communication that becomes increasingly more intricate as the number of cells increases. Calcium plays an important role in this communication, because it exerts regulatory effects on many cellular proteins and cellular processes.

In this recently published study, we dynamically imaged changes in intracellular calcium concentration in the early embryos of Oikopleura dioica using the genetically encoded calcium indicator GCaMP6. By introducing GCaMP6 into the unfertilized egg, after which the indicator is transmitted to all the cells in the embryo, we were able to track calcium signals with a camera by filming the accompanying changes in GCaMP6 fluorescence. We found that regular, intermittent calcium signals actually start to be generated in the unfertilized egg, something that had not been documented earlier. Once the egg is fertilized, and the egg starts to divide, the signals continue with the same regularity, but are initiated in particular cells (those that eventually give rise to the muscle cells of the body) before propagating through other cells in a stereotyped wave-like pattern. We characterized this pattern at different developmental stages, noting that it was always the cells that give rise to the muscle lineage that were the initiators. We then tested the effects of various calcium channel blockers to try to better characterize how the signals are generated. Lastly, we used RNA knockdown methods to diminish the expression of connexin proteins, which generate so-called “gap junctions” between cells - channels of communication which calcium and other molecules can traverse. Here we found that knockdown of connexin expression, and therefore of gap junction expression, disrupted the coordination of the intercellular calcium wave, and resulted in abnormal development. Thus, we can now propose that intricately choreographed calcium signaling through gap junctions plays a pivotal role in steering the early development of the embryo.

The first author of this paper is Yana Mikhaleva. Read more about what she has to say about her recent findings, and her results, and her life in general.

- Can you tell us more about your educational background and why you are working at the Sars Centre ?

I graduated from Lomonosov Moscow State University as a Master in Physiology with specialization in developmental biology. During my Master's project, I studied spermatogenesis in senescence-accelerated mice. At the same time, I attended big course about invertebrate development led by Prof. Belousov L.V. and a very nice summer school at MSU White Sea Biological Station. Therefore, after I finished my Masters, I was sure that I did not want to work on mice and my preference was to study some exotic marine creatures instead and I really wanted to use molecular biology methods. I think I was lucky to find the Sars Centre, which turned out to be my working place for many years. In addition, here I got involved in the field of Evo-Devo, which is an extremely interesting topic of modern science.

- You have been working in two different groups at the Sars Centre, for your PhD and then as a postdoc. Do you see a relationship between these two experiences?

The only common thing between these two projects is the model organism that I am working on – the tunicate Oikopleura dioica. Otherwise, they are very different. The postdoc position in the Glover group gave me an opportunity to expand methods and techniques that I can use for my research, for example the calcium imaging technique, in addition to methods that I used during my PhD project. The benefit of this situation is that I can use all the knowledge that I acquired during my PhD as a solid base for new approaches and apply them together to our current research projects. Using Oikopleura as a model organism is challenging, but I know what to expect from these animals, what kind of problems and pitfalls we can meet, and how to deal with them, and I believe that this makes our study proceed faster.

- Why would you say this new paper is important in your current research field and what should be done after it ?

Calcium signaling is an important feature of embryonic development. Some highly conserved roles of calcium signaling have been discovered, such as in polyspermy block in many different species. However, the role of calcium signaling during embryonic development had previously been described only in main model organisms such as ascidians, zebrafish, frogs and mouse. In invertebrates, it was also described in flies recently. Even in well-studied model organisms, most experiments have focused on a specific developmental time window, because the development of embryos takes much longer than in Oikopleura. In mouse the investigation became even more complicated due to intrauterine development. In Oikopleura we can follow calcium signaling from pre-fertilization to larval hatching and beyond, continuously and at high frequency, and we can therefore use this method as a key to investigate mechanisms underlying several different developmental processes. Our study is just a beginning and could be developed in several different directions, such as the mechanism of inner calcium clocks, the regulation of gene expression by calcium, and tissue-specific calcium signaling. How do cells produce such regular spontaneous calcium activity? Do they require external calcium from the seawater, or do they depend on intracellular calcium stores?   Why are calcium waves initiated only by certain cells in the early embryo? Does calcium regulate stage- and tissue-specific gene expression? Do cells “read” the calcium wave as information about where they should be positioned during gastrulation? And many other questions that we can address here. In addition, including more species in the overall picture can help us understand the role of calcium in an evo-devo perspective, highlighting conserved and divergent functions and potentially indicating species-specific patterns of intercellular coordination.

In my free time, I like to draw. Recently I decided to combine science and drawing and have started to study scientific illustration. Scientific illustration is quite a broad field, so I studied classical techniques (such as ink drawing, stippling, carbon dust, watercolor) and also modern digital illustration in Adobe Illustrator and Photoshop. I made all the drawings that we used in the paper.  Digital illustrations are more practical for publications and presentations, while in my free time I prefer to paint with watercolors.

Another hobby is being a referee in the Norwegian Swimming Federation. Being a referee has some positive sides. First, I feel involved in a social group where I can meet people with the same interests outside of science. Second, it gives me the opportunity to make a small contribution to the development of children’s sports. Third, it gives me a unique chance to meet world-class swimmers like Katinka Hosszu and Sarah Sjöström at the main annual event – the Bergen Swim Festival. And last but not least I can practice my Norwegian there. 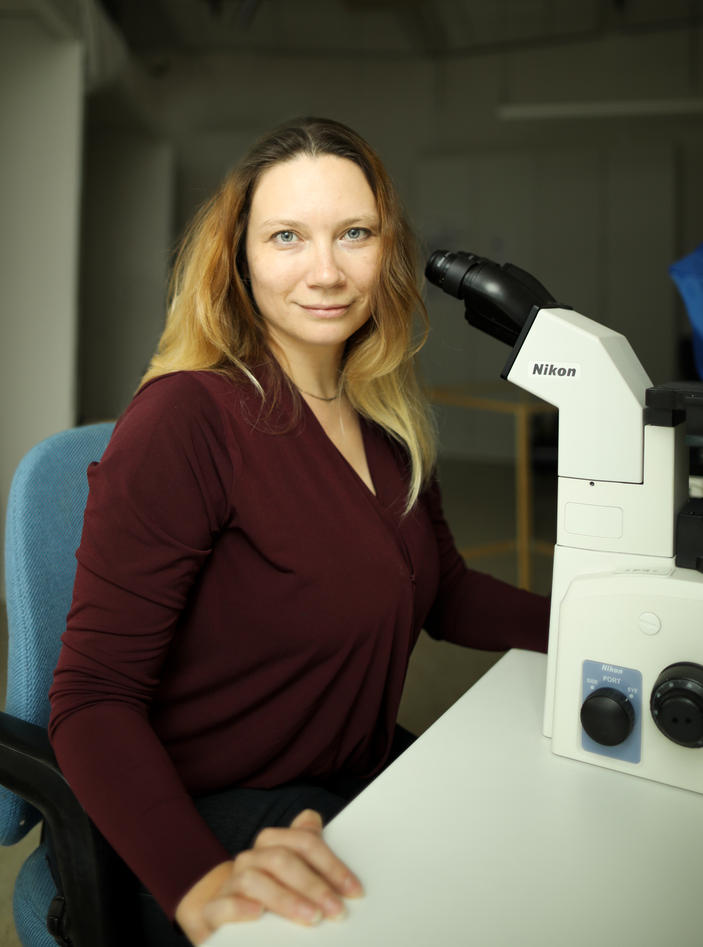 Photo:
Mari Bergsvåg for Sars Centre: Yana at the microscope