The Salt Influenced Rift Basins (SIRB) project, sponsored by Statoil, examines rift tectonics and sedimentation on the Norwegian Continental Shelf, focusing on rift basin structural style and evolution and the rift-climax sedimentary response in areas where structure is influenced by the presence of a detachment horizon in pre-rift salt.

Models of fault growth, in which variations in slip history along individual fault arrays are explained through growth, interaction and linkage of initially isolated segments, are now well established.  This process of fault array evolution explains many of the first order features observed in sediment supply, sediment transport pathways and gross depositional environments within rift basins. However, the resulting tectono-stratigraphic models have largely been derived from studies of relatively simple, basement-involved normal faulting.  In contrast, subsurface and discrete element modelling studies suggest markedly different fault growth histories and structural styles may be related to the heterogeneity of the cover succession, particularly where the cover contains rheologically weak units composed of mudstone or salt.

The specific case studies chosen in the SIRB project are i) late Jurassic of the Halten Terrace area, and ii) late Jurassic of the South Viking Graben. These areas were chosen because they link to asset priorities within the project sponsors (Statoil) and because they allow the development of generic research concepts that provide insights into salt-influenced rift tectonics and sedimentation. We use spatially extensive, integrated 3D seismic and well databases to increase fundamental understanding of the structural evolution and sedimentary response at a rift-wide scale.

Researchers working on this project: 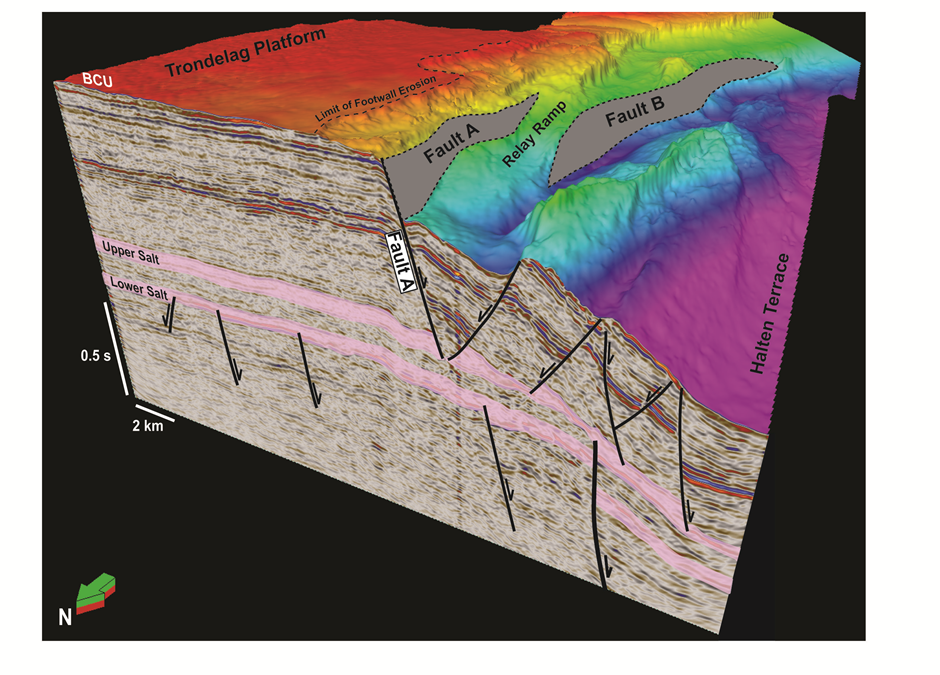 Perspective view of the Base Cretaceous Unconformity (BCU) over the Bremstein Fault Complex, eastern flank of the Halten Terrace..png
01.02.2018