We are pleased to announce the appointment of Jason Nelson as Associate Professor with UiB Digital Culture.

Jason Nelson has been appointed associate professor of digital culture at the University of Bergen in Norway. Prior to his appointment he was senior lecturer of digital art and writing at the Queensland College of Art at Griffith University, Brisbane, Australia, and instructor of professional and creative writing at Bowling Green State University, Ohio, USA.

Coming from Australia, born in Oklahoma, and now creating/teaching/researching in Norway, Jason Nelson is a creator of curious and wondrous digital poems and fictions of odd lives, as well as a builder of confounding art games and all manner of curious digital creatures. As professor, he professes electronic literature, digital art, artistic video games, and other interactive experiences.  Aside from coaxing his students into breaking, playing with, and morphing their creativity using all manner of technologies/data/software and electronic environments, he exhibits and publishes widely in galleries, journals, and festivals, with work featured around the globe at FILE, ACM, LEA, ISEA, SIGGRAPH, ELO, ARS and dozens of other acronyms.

Reviews of and interviews about his creative research have appeared in such publications as Wired Magazine, Der Spiegel, Liberation, The Wall Street Journal, New Scientist, Boing Boing, Huffington Post, Joystig, The National, The Australian and numerous other international publications.

There are awards to list (Paris Biennale Media Poetry Prize, Digital Writing Prize, New Media Writing Prize (People's Choice), among others), organizational boards he frequents (Australia Council Literature Board and the Electronic Literature Organization), and Fellowships he’s adventured into (Fulbright Fellowship at the University of Bergen, Moore Fellowship at the National University of Ireland), and numerous other accolades (Webby Award), but in the web-based realm where his work resides, Jason is most proud of the millions of visitors his artwork/digital poetry portal has attracted over the years.

Examples of his work include "The Wonders of Lost Trajectories," which developed digital writing works spanning poetry, fiction, and interactive text inspired by or directly informed from materials in the Queensland state archives; "Acesulfame K," an interactive poem that sees the reader falling, smashing, bouncing, and squeezing into, past, over, and around the hypnotizing and terrible wonders of contemporary supermarkets; and "Cryptext and Nomencluster" -- two separate games developed for one of the world's largest, most advanced touchscreen spaces, towering over two stories.

In digital culture, Nelson's research explores the way interface, form, and interaction can be used as a literary and artistic element, as well as digital artworks and writing that examine the nature of unexpected experience or hidden narratives created through projection, augmented reality, and video games. Additionally, he is creating a series of art-poetry-narrative games to be published in a dispersed series of journals, magazines, institutions, and art portals. He is also interested in the role of translation and of multiple languages and cultural approaches within the field of electronic literature, as well as the possiblity of combining drones, artificial intelligence, and artistic/literary research more generally.

As for teaching, his primary interest lies in exploring the pedagogical possibilities of creative practice in his courses and combining theory with the creation of digital art and literature. At UiB, he plans to launch a new student-led and -contributed online journal and arts space later in 2021, which should help to create creative communities within the university's student groups. 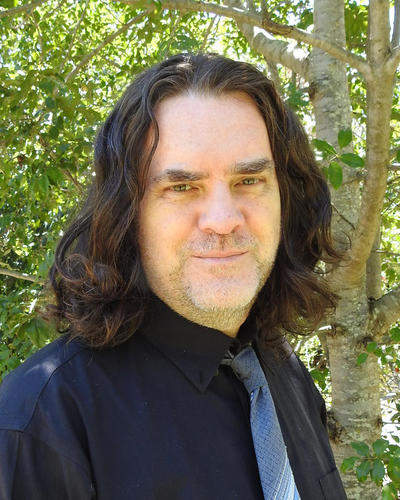