There has not been added a translated version of this content. You can either try searching or go to the "area" home page to see if you can find the information there
News from På Høyden

Asks Norway to say no

James E. Hansen has asked Norway to say no to the exploitation of oil sand in Canada. - It would send a strong signal if Norway says no, he says.

More than 20 years have passed since the American professor and scientist James E. Hansen warned against climate change during a speech made to the American Congress.  Little has happened since.

- The politicians are green-washing the issue.  They use the right words when they talk about climate changes, but they do not follow through, says Hansen.

Lacking an example
Norway now has a unique opportunity to adopt a clear and definite stand in the debate about climate change according to Hansen.

Thanks to the oil industry, Norway has been able to build up enormous resources over a period of several decades.  It would be a strong signal, and one that countries such as the USA and Canada would have problems ignoring, if the Norwegian state say no to Statoil’s plans to exploit the commercial potential of oil sand, says Hansen to På Høyden.

And it’s urgent that somebody takes the initiative, because the facts don’t look good for the climate, says Hansen.

- Money talks in capitals all over the world.

He paid a visit to the University of Bergen last week – arranged by the Norwegian Climate Foundation and the Bjerknes Centre. He talked about climate changes and energy policies during a lecture in “The Egg” auditorium at the Student Centre.  He believes that the best short-term solution is to make it expensive to use fossil fuel.  Hansen suggests that a tax on carbon emissions be introduced.  In order for a tax on carbon emissions to be effective, it would have to be an internal concern, so that the state could distribute the benefits based on the amount of tax paid by citizens.

Forced to believe in nuclear power.
Hansen sees nuclear power as the most realistic alternative to fossil fuels at present.  A couple of years ago, he would have answered differently.

- When I see how close we are to an irreversible moment in time regarding global warming and at the same time see that China and India get between 80 and 90 percent of their energy from coal, then I look at it differently.  We now have the chance to build safer nuclear power stations, where the storage time is dramatically reduced, he says.

He’s not as optimistic regarding renewable energy.

- Renewable energy should of course be used for as long as possible, but in the USA this type of energy is less than one percent of total usage.  Germany uses subsidies, but has still only reached seven percent.  It is not likely that we will be able to phase out coal with the aid of renewable energy resources, says Hansen.

Censured
We are beginning to run out of time, according to Hansen. He is afraid that we will reach a point of no return, when it will be too late to stop changes happening to the climate.

One of the biggest challenges for the environmental movement is that we cannot see the immediate results of climate change, according to Hansen.  He compares global warming with the heat that builds up inside a pipeline.

- The planet has only just begun to react to global warming, he says.

It doesn’t take more that one cold winter before people begin to have doubts about global warming.  Strong forces are also trying to sow doubt about whether or not it is caused entirely by mankind, and the mistake made by the UN climate panel predicting that glaciers in the Himalayas would melt much more quickly than they are doing, didn’t help the environmental movement much.  Politicians are under pressure from energy-lobbyists and many of them have ended up in the industry’s pocket, according to Hansen. He himself has had press releases censured.

- The gap between what scientists understand and what the public know is unfortunately getting bigger and bigger, he says.

A moral question
Nevertheless, he thinks that research results are so clear that they must be taken seriously.

- Global warming is not about belief; it’s about science, he says.

He hasn’t quite yet lost the belief that both young and old, politicians, the authorities and everybody in-between, will finally realise how serious it is. He refers to the fact that parents have always made sacrifices for their children and if they can be made to understand the seriousness of the situation, then he believes that they will be prepared to make sacrifices again.

- Climate change is a moral question because it’s caused by our use of fossil fuels.  We get the advantages, but our grandchildren will have to pay the price, says James E. Hansen.

Hansen puts a lot of faith in the interaction that takes place between children and their grandparents.

- Youth can become a powerful political force and we of the grandparent generation should do our best to support them. We have both the life experience and the time that is necessary.  The parent generation doesn’t, says Hansen. 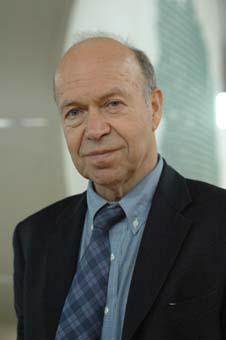 - People don’t understand how serious it is because they don’t see the changes with their own eyes, says James E. Hansen
Foto/ill.:
Åse Johanne Roti Dahl