Within a limited geographical area near Svalbard we have hot vents and cold seeps, volcanoes and mud-volcanoes.

Fluids can escape from the seafloor at the continental margins. Whereas the fluids emanating from hydrothermal fields at the ridge are extremely hot (up to 400C), the fluids escaping from the sedimentary deposits at the continental margin are much colder – they are therefore called cold seeps. Some cold seeps are associated with mud-volcanoes, areas where the muddy sediments below the seafloor are mobilized and extrude on the surface as a result of the upward flow of fluids.

In the Norwegian-Greenland Sea the mid-ocean ridge comes close to the continental margin southwest of Svalbard. Therefore, within a limited geographical area Svalbard has hot vents and cold seeps, volcanoes and mud-volcanoes. A range of active fault zones at the ridge, and giant submarine landsides from the continental margin further ads to the variety of geodynamic processes in this area.

Seafloor spreading takes place at rates ranging from ultra-fast (15 cm/year) to ultra-slow (<1.5 cm/year). Ultra-slow spreading ridges have recently been recognized as a distinct class of spreading ridge with specific characteristics such as unusually thin crust and ridge segments with mantle rocks exposed at the seafloor.

A new type of hydrothermal system was recently discovered at the flank of the Mid-Atlantic Ridge by our partners at the University of Washington. Rather than being fueled by the heat from magma at depth - as other known hydrothermal systems at the spreading ridge axis - the venting at "Lost City" may be driven by exothermic rock-water reactions taking place when seawater circulates through mantle rocks (peridotites) exhumed by tectonic processes. In contrast to the 200-400ºC sulphur-rich, acidic waters of basalt-hosted white and black smoker fields, this peridotite-hosted hydrothermal field produce methane- and hydrogen-rich fluids at <40-90ºC and pH 9-11 that support a thriving microbial community in carbonate chimneys. Both basalt-hosted and peridotite-hosted hydrothermal systems may be common at ultra-slow spreading ridges as such ridges are characterized by areas with robust volcanic activity next to segments where the mantle rocks are exposed at the seafloor by tectonic activity. Although hydrothermal activity at ultra-slow spreading ridges is largely uncharacterized, it seems probable that it is more diverse than at faster spreading ridges with the geo-biosphere potentially interacting across a wider range of fluid compositions. Furthermore, hydrothermal systems here may be composite (basalt/peridotite hosted) and may be the closest modern analog to Achaean hydrothermal systems hosted by komatiite (olivine-rich basalts) - which may have been sites for the synthesis of building blocks of life and the earliest life. The ultra-slow spreading environment is therefore our primary target for this program.

Investigating subseafloor processes and the deep biosphere ultimately requires seafloor drilling. However, drilling in the rift valley at spreading ridges - named zero-age drilling - has generally failed due to the extremely difficult drilling conditions provided by the surface lavas. This has left the constructive plate boundary mostly unsampled by deep-ocean drilling, which has hampered research on the geodynamics, hydrology and deep biosphere of the ocean crust. The successful drilling of the Middle Valley segment of the Juan de Fuca Ridge in the Pacific Ocean represents an exception to this, as a thick sequence of sediments that cover the lavas provide improved drilling conditions.

A similarly unique situation occurs where AMOR at 74°N passes from the Mohns into the Knipovich Ridge. Here the rift valley floor is locally covered by several hundred meters of sediments due to the proximity of the ridge to the continental margin. The Southern Knipovich Ridge has a very low effective spreading rate (6 mm/y) and represents the extreme ultra-slow end of the global ridge system. We envision that drilling the Southern Knipovich Ridge will answer first-order questions related to spreading processes, water-rock interaction, hydrogeology and the subseafloor biosphere at the very slow-spreading end of the spreading ridge spectrum. At ultra-slow spreading environments it is hypothesized that hydrothermal water may interact with tectonically exhumed mantle forming hydrogen that supports a chemolithotrophic subsurface biosphere. Due to the sediment cover, AMOR at around 74°N appears to us as the best locality worldwide to test this hypothesis with current drilling technology. 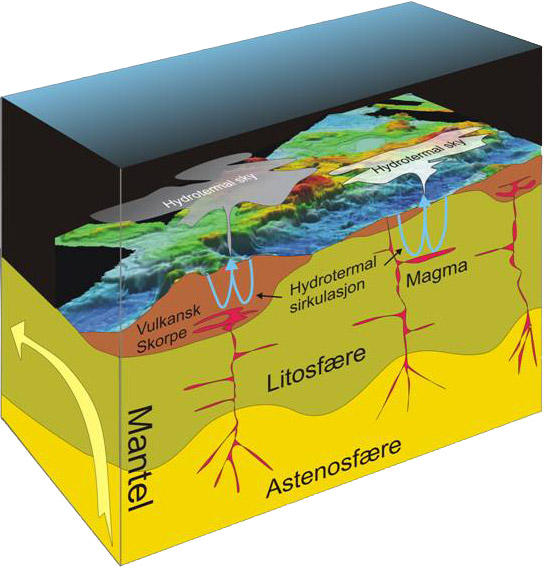