There has not been added a translated version of this content. You can either try searching or go to the "area" home page to see if you can find the information there
From the media

BBC News Science and technology reporter, Jason Palmer, looks into the case of a computer scientist, Fabrice Bellard, claiming to to have computed the mathematical constant π to nearly 2.7 trillion (2.7x10^12) digits.

The mathematical constant π  is the ration of any circle's circumference to its diameter in Euclidean space. It equals also the ratio of a circle's area to the square of its radius and it is one of the most important mathematical and physical constants. It appears in many formulae from mathematics, physics, science and engineering. Its first digits, in the usual decimal notation, are 3.14159.The Greek letter π, often spelled out pi in text, was adopted for the number from the Greek word for perimeter "περίμετρος", first by William Jones in 1707, and popularized by Leonhard Euler in 1737.

π is an irrational number, meaning that its value cannot be expressed exactly as a fraction m/n (for integer values of m and n). This implies that its decimal representation never ends or repeats itself. π is also a transcendental number, meaning that it is not the solution of a (non-constant) polynomial  equation with rational coefficients. Throughout the history of mathematics, there has been much effort to determine π more accurately and to understand its nature; fascination with the number has even carried over into non-mathematical culture.

The new record is some 123 billion digits more than the previous record using a desktop computer to perform the calculation, taking a total of 131 days to complete and check the result.

This version of π takes over a terabyte of hard disk space to store. 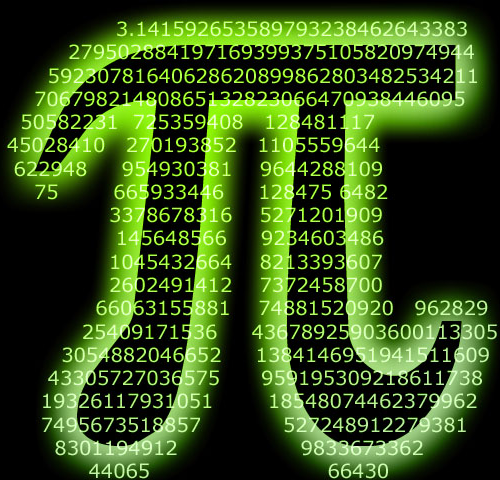