Polymerase gamma is the enzyme that replicates and repairs mitochondrial DNA. It is a heterotrimer comprising one catalytic subunit (pol-γA), encoded by POLG on chromosome 15 and two accessory subunits (pol-γB) encoded by POLG2 on chromosome 17. Over 150 disease causing mutations have been reported in the human POLG. These cause a broad spectrum of disorders varying significantly in age of onset and severity, from late onset myopathies to juvenile/adult ataxias usually associated with epilepsy, and infantile encephalopathies and hepatopathies. POLG mutations are among the commonest causes of inherited ataxia in Norway and Finland. Only a few POLG2 mutations have been described.
POLG-related disease is now considered the commonest form of mitochondrial disease so far recognised. We are conducting multidisciplinary, studies of POLG associated disease, ranging from laboratory studies using stem cells and mouse models to clinical studies based on our newly established POLG register.

POLG encephalopathy syndromes are characterised by a continuum of clinical phenotypes with a wide range of age of onset, severity and clinical overlap. The most common clinical features of POLG encephalopathy are ataxia, peripheral neuropathy, encephalopathy with stroke-like episodes and epilepsy. Infantile-onset disease is commonly associated with a rapidly progressive course and high mortality. Cardinal features include psychomotor regression, epileptic seizures, encephalopathy and liver disease. In juvenile and adult-onset encephalopathies, patients usually present with ataxia, epilepsy and headaches. Liver disease occurs in approximately half the cases and may be spontaneous or precipitated by exposure to the antiepileptic drug sodium-valproate (Tzoulis et al., 2006b).

The natural course of juvenile/adult POLG encephalopathy is typically acute-on-chronic, with acute exacerbations, superimposed on a progressive neurological deterioration. Acute exacerbations have been called stroke-like episodes (SLE) and are characterised by acute or subacute neurological dysfunction, often with prodromal symptoms such as migraine-like headaches, visual disturbances and mental changes. Prodromal symptoms may precede the onset of acute neurological dysfunction by up to several days (Tzoulis et al., 2010).

The three most important predictors of prognosis in POLG encephalopathy are age of onset, whether or not the patient develops epilepsy and genotype. Patients with infantile onset (≤ 2 years) have more rapid progression and significantly shorter survival time compared to those with later onset. Epilepsy in adult onset disease is associated with episodes of acute exacerbation, and a high mortality. Infantile onset disease is most often associated with mutations in exonuclease and polymerase regions of the gene and this carries a poor prognosis. Interestingly, we have shown that adult patients who are compound heterozygous for the two most common POLG mutations (A467T and W748S) have more severe disease and significantly higher mortality compared to homozygous patients, suggesting a possible dominant-negative interaction effect (Tzoulis et al., 2006b).

In collaboration with Prof Massimo Zeviani, Director, MRC Mitochondrial Biology Unit, Wellcome Trust, Cambridge, UK, we have now constructed a transgenic mouse with the murine equivalent of the human c. 1399G>A, p.A467T POLG mutation. This is one of the commonest POLG mutations and one that occurs frequently in the Norwegian population. This mouse will provide us with a robust and tractable model to investigate the pathogenesis of POLG related disease. The c. 1399G>A, p.A467T POLG mutation is associated with various phenotypes from late onset disease to the early onset Alpers-Huttenlocher syndrome. This latter occurs especially when it is in combination with a null allele. To reproduce this situation we obtained in collaboration with Dr Aleksandra Trifunovic, University of Cologne, Germany, a PolG knockout mouse, and the breeding with our PolGA449T is currently ongoing.

3. Metabolic studies of POLG.
Ina Katrine Nitschke Pettersen is co-supervised with Dr Karl-Johan Tronstad (Institute of Biomedicine). Dr Tronstad is the main supervisor. Ina is looking at metabolic control in various mitochondrial diseases including POLG related disease. These studies seek to define the effects of POLG mutations on the metabolic activity in general, but particularly on other aspects of mitochondrial energy control. 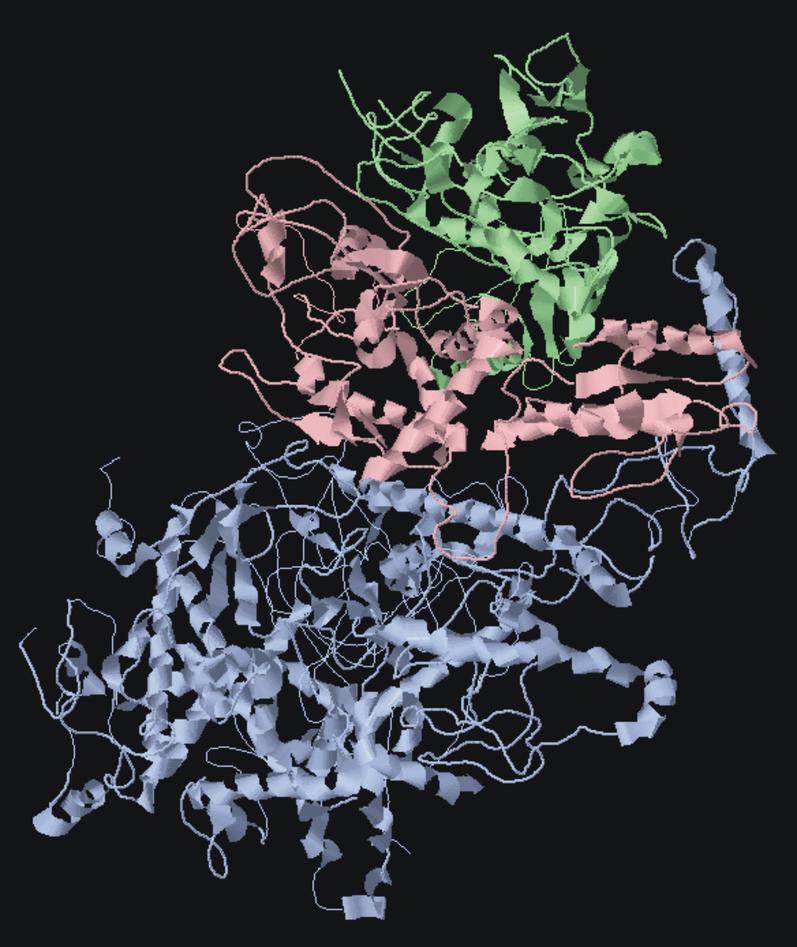 Cartoon depicting the structure of the pol-γ holoenzyme. The catalytic subunit (pol-γA) is blue and the accessory subunits (pol-γB) green and pink (pdb 3IKM, Lee at al., 2009). 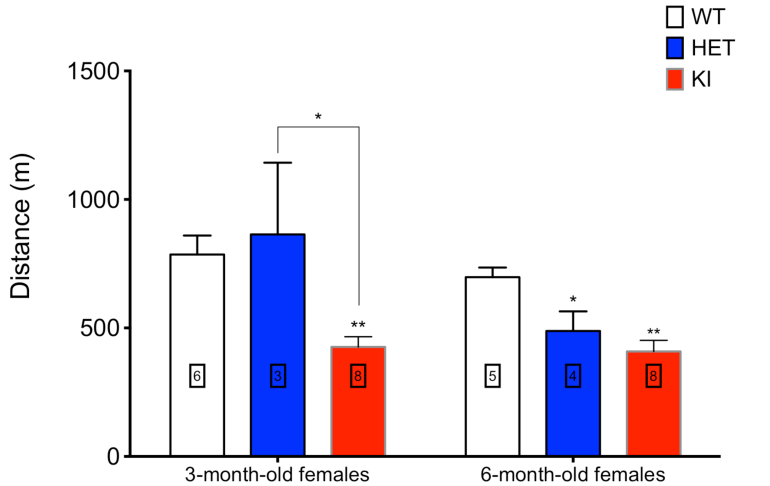 Figure: Treadmill activity in wild type and PolGA449T heterozygous and homozygous females at 3 and 6 months of age
Foto/ill.:
MMN
16.11.2018