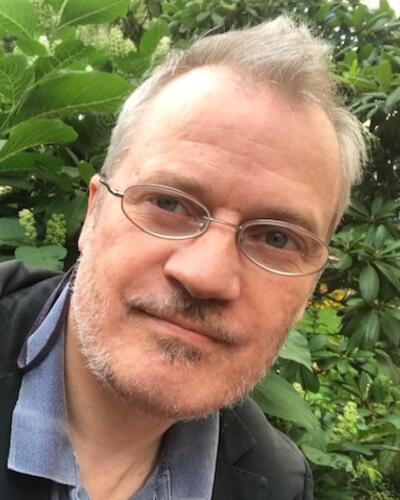 Morten Fjeld is a professor of Human-Computer Interaction at the University of Bergen (Norway) and Chalmers University of Technology (Sweden). His research activities are situated in the field of Human-Computer Interaction with a focus on tangible and tabletop user computing. In 2005, he founded the t2i Interaction Lab at Chalmers, Sweden. He holds a dual MSc degree in applied mathematics from NTNU (Trondheim, Norway) and ENSIMAG (Grenoble, France), and a PhD from ETH (Zurich, Switzerland). In 2002, Morten Fjeld received the ETH Medal for his PhD titled "Designing for Tangible Interaction". In 2011, he was a visiting professor at NUS Singapore, in 2016 and 2017 at Tohoku University, Japan, and in 2019 to 2020 at ETH Zurich. Morten Fjeld also has extensive industrial experience in the areas of fluid mechanics, simulators, and user interface design.

In 2007, Fjeld initiated the renowned ACM conference series on Interactive Surfaces and Spaces (ISS). ISS was originally sponsored by IEEE and called at that time TableTop. In 2017, he was general chair for ACM VRST, which then attracted a record number of participants. He is the leader of the VRST conference steering committee. Both ISS and VRST have drawn significant industrial funding to the research communities of which Fjeld is a member. As a leader in the CHI community, Fjeld has been an Associate Chair (AC) and a Subcommittee Chair (SC) at ACM CHI for several years, indicating strong leadership in the ACM CHI community. He gave an invited demonstration at EUROGRAPHICS 2015 and invited keynotes at ACM NordiCHI 2016 and VRST 2017.

At UiB, Fjeld is the WP-leader of the WP4 on Media Content Interaction & Accessibility at the Research Centre for Responsible Media Technology & Innovation. He is also the WP-leader for Wearables and Application Development in a project recently granted by Research Council of Norway: Collaborative Project "ANeED Joint Effort 21: eHealth and a PPI-program in Dementia with Lewybodies (DLB)", directed by Prof. Arvid Rongve. In collaboraiton with Prof. Bjørn Sætrevik at UiB and Prof. Kjetil Nordby at AHO, Fjeld co-PIs a project on "Enhancing collaboration and shared understanding through implementing AR features in bridge design", generously funded by the UiB area of Marine Research.

At Chalmers, Fjeld PIs WASP-HS project called The rise of social drones: A constructive design research agenda, a team of six researchers (three seniors, a Postdoc, and two PhD-students) address the implications of drones as they become increasingly ubiquitous in our everyday lives. In addition to their most common usage in aerial photography, drones are predicted to become highly important in supporting people with disabilities. Within this project, Fjeld’s team will be investigating how social drones are best used and regulated in order to benefit individuals and society as a whole.