Videos from Professor George Rousseau's annual seminar, October 2018, at the University of Bergen.

Cultural historian George Rousseau (Oxford University) is known as one of the founders of the internationally established field of Literature and Science, and of Literature and Medicine, academic attainments that will feed into the seminars he offers as a visiting professor in Bergen from 2017-2020.

Dr. Soledad Marambio (University of Bergen)
The Angst of Falling Asleep and the Dread of Waking up

‘The Natural History and Poetics of Sleep’

‘Nocturia and the Nocturnal World of the Ageing’

George Rousseau, ‘Nocturia and the Nocturnal World of the Ageing’
Produsent:
UiB

‘Sleep and the Proustian conception of time’

‘Contemporary Culture and the Current State of Sleep Science’

'The Angst of Falling Asleep and the Dread of Waking up'

Soledad Marambio, 'The Angst of Falling Asleep and the Dread of Waking up'
Produsent:
UiB

‘Sleep and Human Ageing in terms of health and regulation’ 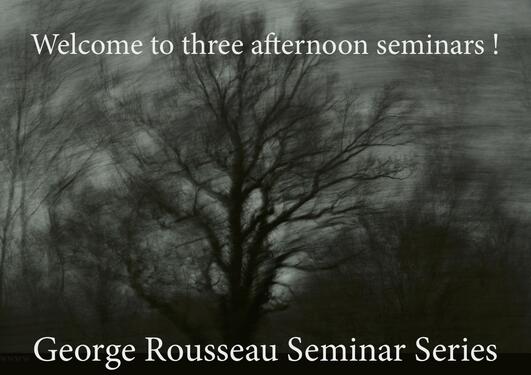