Molecular and genetic analyses of gene regulation in embryonic development 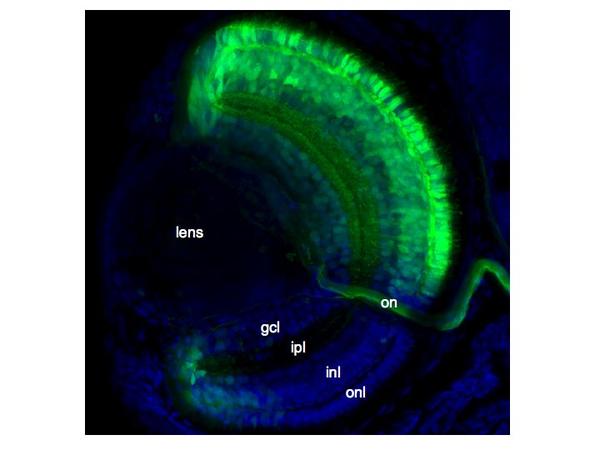 The vertebrate neural retina is an excellent model system to investigate neurogenesis. Notably, this developmental process includes several stages at which specification of different cell fates is tightly linked to control of cell proliferation and cell-cycle exit. These are central aspects of cell biology that are particularly relevant to biomedical research on cancer and stem cells.

The zebrafish (Danio rerio) has become a powerful model system to study retinogenesis, and recent progress in transgenic technology provides new tools for identification and analysis of particular cell populations within the developing eye.

Spatiotemporal control of gene expression is a crucial part of the mechanisms that establish patterns of different cell types in embryos. To gain a deeper understanding of this fundamental aspect of development it will be important to analyse how regulatory transcription factors (TFs) function to control gene expression. Homeobox genes constitute the largest group of genes that encode TFs with developmental control functions. These regulatory proteins, which include many different classes, have related homeodomains (HDs) with specific DNA binding properties. We have used the zebrafish (Danio rerio) model to study how several classes of HD-containing TFs (En, Hox, Hlx, Pax, Six) contribute to control brain and eye development.

Eye development includes several distinct stages and starts with the specification of retinal progenitor cells (RPCs) within the eye field of the anterior neural plate. The bilateral eye field is defined by the overlapping expression of several HD-containing TFs (Otx2, Pax6, Rx, Six3), which are essential for normal eye development. Following the initial discovery that Pax6 is expressed in the developing eyes of zebrafish and mice (Krauss et al., 1991b), the regulatory networks associated with eye development have been further investigated in both of these vertebrate models. Importantly, the TFs defining the initial eye primordia have also been shown to contribute to the differentiation of specific cell types in the neural retina. In our laboratory, we have studied Pax6 and three zebrafish Six3 gene homologues in relation to eye development (Krauss et al., 1991b; Seo et al., 1998a; Wargelius et al., 2003).

Similar to mammals, the zebrafish neural retina is composed of six types of neurons and one type of glia (Müller glia), which constitute three nuclear layers: retinal ganglion cells (RGCs) in the ganglion cell layer (GCL); amacrine, bipolar, horizontal, and Müller glial cell in the inner nuclear layer (INL); and rod and cone photoreceptors in the outer nuclear layer (ONL). Furthermore, most of these retinal cell types have been shown to consist of distinct subpopulations that differ in subtle aspects of their function and appearance. Among the retinal neurons, amacrine, bipolar and ganglion cells are known to have a particularly high diversity (~40 morphologically distinguishable subtypes in total). Some of the subtypes can also be identified based on the presence of specific neurotransmitters or neuropeptides. However, it remains to analyse in further detail the molecular characteristics of the different subtypes. In particular, it will be important to investigate how the diversity is generated by differences in the regulatory networks.

In zebrafish, where functional eyes are rapidly formed during the first 5 days of development, the gene functions that control this process can be manipulated directly by microinjection of excess amounts of mRNA (overexpression) or antisense morpholinos (underexpression) into fertilized eggs. In addition, transgene techniques can be used both for analysis of cis-regulatory elements and to manipulate expression. In particular, reporter genes based on Green Fluorescent Protein (GFP) are very useful to monitor gene expression in living individuals during embryonic and larval stages of development. We have applied recently developed enhancer trapping techniques, which combine the advantages of the GFP reporter and the Gal4/UAS system, to identify genes that are expressed in subsets of retinal cells. This work has led to identification of multiple transgenic lines with Gal4/GFP expression in subsets of RPCs and subpopulations of retinal neurons (Zhao et al., 2009). Ongoing work in our laboratory aim to characterize the specific retinal cells that are GFP/Gal4 labelled in these transgenic lines. In addition, the Gal4/UAS system will be exploited to drive expression of other transgenes in the labelled retinal cells. This approach will be used to analyse the functional roles of specific homeobox genes and other genes suspected to have regulatory functions in retinal cell differentiation or cell-cycle exit. The information gained from these studies will help to elucidate the regulatory networks controlling proliferation and differentiation of RPCs.