The Norwegian Molecular Imaging Consortium (NorMIC) is one of eight technology platforms forming the pillars of the FUGE II program. FUGE represents a national program to develop and strengthen research in functional genomics in Norway.

The Molecular Imaging Center (MIC) initiated its services in 2003 under FUGE I, and was comprised of MIC Bergen (cell and tissue imaging) and MIC Trondheim (whole animal MR imaging). The intention was to improve imaging technology and cooperation between users and to support scientists in Norway and visitors from abroad. The facility has since the beginning offered a collection of state-of-the-art microscopy equipment and image processing tools. In the FUGE II period two new imaging consortia have been created: A Cell/Tissue Imaging network, currently headed by the Bergen node, and a whole Animal Imaging network headed by the MR node at NTNU. 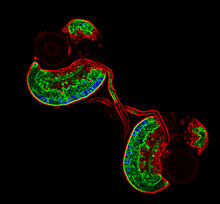