Hopp til hovedinnhold
Senter for farmasi

The molecular weapons of influenza virus

The influenza A virus (IAV) triggers global flu epidemics again and again, killing tens of thousands, sometimes millions of people. Researchers at Helmholtz Center for Infection Research in Braunschweig, the University of Erlangen-Nürnberg, Heinrich-Pette-Institute, Hamburg, Institute of Biochemistry, Charité Universitätsmedizin-Berlin and the Pharmacognosy research group at Centre for pharmacy, Department of Chemistry, University of Bergen have now thoroughly investigated one of the molecular 'weapons', which targets the pathogen for us.

Schematic depiction of influenza A virus (IAV) and expression of PB1-F2 by the use of an alternative (+1) open reading frame (ORF) on the RNA polymerase basic protein 1 (PB1) gene segment. Structure of PB1-F2 shown was determined by NMR spectroscopy.
Foto/ill.:
Torgils Fossen

Our analysis of the IAV-molecule PB1-F2 revealed that this protein may at least be partly responsible for the devastating effects of the virus. PB1-F2 appears to cause harm to the host cell membranes and can therewith cause the death of the cell. This may be particularly important since other disease-causing viruses have proteins with very similar function. Under certain circumstances the harmful effects of various viral infections may therefore be based on very similar molecular basis.

The flu pathogen IAV includes relatively spartanic molecular features: until recently it was believed that its genes encoded only ten different proteins - more sophisticated multicellular organisms like humans have tens of thousands while on the other hand, even bacteria have still more than a few hundred. The virus doesn't need that many because it simply makes use of the biochemical machinery of the infected host cell for its proliferation and dissemination.

Meanwhile, researchers have found an eleventh protein of the influenza A virus, namely PB1-F2. Its function is presumed to be the killing of cells - likely as part of the "counter-measures" of the virus in combating the immune system of the host organism.

Common anti-virus strategy
With elaborate spectroscopic, biochemical and molecular biological techniques, scientists have now analyzed the structure of the PB1-F2-molecule. Our conclusion: "The structure of the protein suggests that it destroys membranes, particularly the membranes of mitochondria, which supplies the cell with energy," explains Dr. Victor Wray, group leader at the Helmholtz Center for Infection Research in Braunschweig. "Interestingly, it is very similar to known proteins in the AIDS pathogen HIV and the HTLV virus which may trigger leukemia," says Professor Ulrich Schubert, a virologist at the University of Erlangen-Nürnberg. "If these viruses actually make use of common mechanisms, then medicine and pharmacy may be able to act against them one day, using very similar strategies." 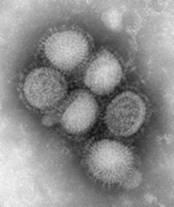