There has not been added a translated version of this content. You can either try searching or go to the "area" home page to see if you can find the information there
Conference

Ensuring Healthy Lives for All

Over 300 participants from more than 30 countries attended the 10th GLOBVAC conference held this year in Trondheim.

The primary objective of the GLOBVAC programme is to support high-quality research with potential for high impact that can contribute to sustainable improvements in health and health equity for poor people in low- and lower-middle income countries (LMIC). Learn more about the programme’s goals and objectives.

Networking and idea and information exchange

One of the important vehicles for building up critical mass in interest and competency in this area is the regular hosting of an international conference on Global Health and Vaccination Research. This year the 10th international GLOBVAC conference was held 14-15 March in Trondheim. The theme for this year’s conference was UN SDG #3: “Ensuring healthy lives for all”.

In addition to the scientific and poster presentations, conference highlights included dovetailing the official conference opening with the opening of an Art exhibition entitled “Immune Nations”. Both John-Arne Røttingen, the Administrative Director for the Research Council of Norway, and Gunnar Bovim, the Rector of NTNU, which hosted the conference, spoke of how important science-art collaborations are for helping research results to reach a broader audience.

Pulling out the stops

Trondheim and NTNU literally pulled out all the stops for the Conference Dinner, which began with a brief presentation of the impressive Trondheim Cathedral, St. Olav’s and included a short organ recital on the extraordinary Steinmeyer organ, before having dinner at the 12C Archbishop’s Palace – Scandinavia’s oldest secular building.

The Director of the Centre for International Health (CIH) at the University of Bergen (UiB), who is also the Leader of Forum, Bente Moen welcomed all the delegates to the conference. Professor Thorkild Tylleskär from CIH stepped in at the last minute to replace a speaker who was ill and spoke about SDG and global health. He underlined that we must not forget the youngest and frequently unrecorded people on the planet. The leader of CIH’s Centre of Excellence, the Centre for Intervention Science in Maternal and Child Health (CISMAC), Halvor Sommerfelt, summarised the ongoing activity at CISMAC, which is now approaching the mid-point of the Centre period. In addition, CISMAC’s researchers were well represented among the nearly 90 poster presenters – one of which won the conference’s poster prize.

Read other reports about the conference 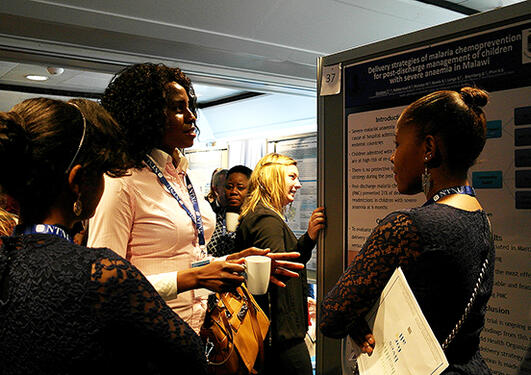