Establishing a New "Common Sense": A Study of the Leftist Movement in Northeastern United States

This thesis examines political activism among young leftist activists and self-declared socialists in New England, United States. Based on my fieldwork of 2017, I have explored how members of a DSA (Democratic Socialists of America) chapter organizationally and structurally work towards realizing socialism as an alternative societal structure within theirs and their surrounding communities, as well as in American society as a whole. My interlocutors are college-educated millennials facing a stagnating labor market carrying with them high-interest student loans, and have been disproportionately affected by the 2008 financial crisis. Tired of witnessing the alienation and individualization that capitalism, in their experience, brings with it, I argue that through their words and actions, my interlocutors are engaged in an attempt to establish a new “common sense” within US society as to how society should be structured that challenges the current dominant neoliberal and capitalist narrative. I explore four central topics in this thesis. The first part of the paper depicts the time constraints that my interlocutors faced in their daily lives and how this affected their ability to engage politically. I explore the systemic and structural reasons for it, and argue that the experience of such time constraints is connected to how the capitalist labor market is structured in the US. I then turn to the topic of socialism and how my interlocutors conceptualized and talked about it. Here I discuss the generational difference when it comes to how different people in the US relate to socialism, and show how it was talked about among some of my interlocutors as an alternative vision for the kind of society they wanted to live in. In the second part of the paper, I depict the discussion amongst my interlocutors as to how they were to practically go about realizing this alternative vision. There was a broad consensus within the DSA chapter that they were to both do grassroots-work and be engaged in elections when working for reforms, but varying opinions arose when they discussed how to practically be involved in elections, which was connected to their unenthusiastic view of the Democratic Party. In the last part of the thesis, I explore the topic of civic engagement and social media’s role in the activism work my interlocutors were engaged in. Through a debate of traditional American civic engagement and social media’s role within social movements more generally, I show how social media and the Internet was seen as an important supplemental tool for the work my interlocutors were engaged in, but that what really mattered when working to create long-lasting political and social change for them was real on-the-ground, face-to-face action. 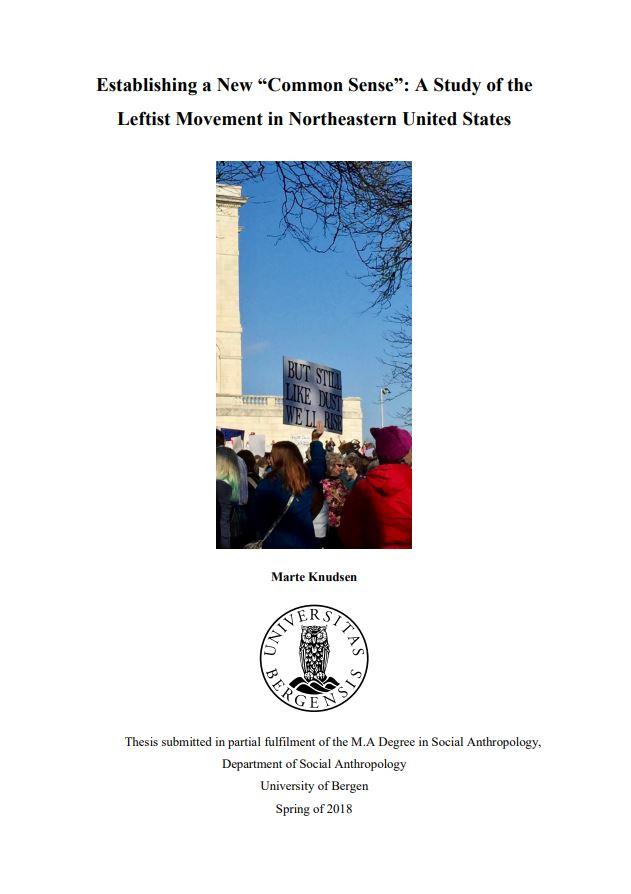