"To hell with you and your union, we are going whatever you say". An ethnographic study of how class, race, ethnicity, and immigration affected the Brexit referendum

Based on a five-month long fieldwork in Wigan, North West England this thesis presents an analysis of how class, immigration, ethnicity and race affected the Brexit referendum. I did my fieldwork in a post-industrialised area, where cotton and coal where the main industry. In the 80’s when Margaret Thatcher was Prime Minister, she and her government maid cut in the industrialisation. The cut in the industrialisation made people struggle to find work, and this is still the case so many people are receiving welfare. Around the canal where they in the earlier days where freighting cotton and coal has been rebuilt and it is made nature reservations instead. Many of the houses in the area are worn, and it seems like they have not been prioritized the latest years. This do also make housing problems, there is not enough houses for the individuals. In the National Health System (NHS) there is also a lot of waiting before people get an appointment. There has been a high income of both EU immigrants and immigrants from outside the EU the last couple of years and some of the British people have seen this as a problem. It has been claimed that this is one of the reasons for why many people wanted to leave the EU. In the area where I have been doing fieldwork, there is not many immigrants, however, many of the inhabitants voted to Leave the EU because of immigration. People get their opinions from what they see and hear, and media must be said to have a large influence in people’s opinion. The European Union is an organization who tries to unite the European nations by set up many deals between them. My interlocutors do see some disadvantages with this organization and claims that they do not find the organization democratic enough. By following the everyday life amongst my interlocutors, who is identified by both the working class and middle class, I have seen how they have acted in different arenas. I used a lot of time in a chairytshop where I have seen unpaid workers who are doing work-training whilst looking for a job and people who were doing volunteer work because they wanted to do something valuable. In addition, I have been doing weekly activities such as cycling and jogging, and I have been going regularly to the pubs. Through the months in field I have also been participating in political meetings on both the left wing and right wing political parties to see how these to political sides differs from each other. 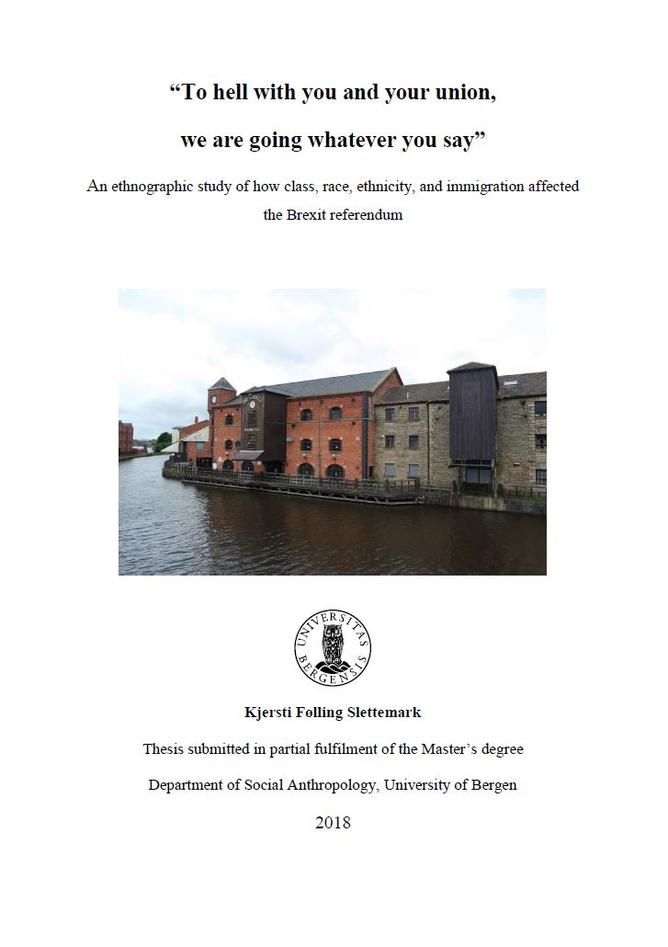